Now Open: An Intimate French Bistro That Already Feels Like Part of the Neighbourhood Bistro Francais launched just three weeks ago (in time for a French restaurant’s best gig, Valentine’s Day) and already restaurant manager Nazzareno Falaschetti is advertising for more staff. “I thought I could do it with just me out front, but it’s been busy. Really busy,” he tells Broadsheet when we visit on warm Friday evening. It’s early and the Hyde Park eatery is already filling up. Falaschetti says he’s fully booked for both sittings. It’s a great endorsement of what he and chef Fabien Streit have to offer in their first venture together.

The two European expats (Streit is French and Falaschetti hails from Italy’s north) met while working at O’Connell Street’s Cliche (transformed in 2019 into Japanese restaurant Kosho) and are now housemates as well as business partners. Bistro Francais represents the first time either has had real skin in the game, and they acknowledge it’s a risky mix. Falaschetti says they “almost killed each other” during opening week but have since settled into a rhythm – much to the pleasure of patrons.

The narrow, cosy venue feels intimate, but ticks over at just the right pace so staff don’t hover. It’s come a long way since our first visit with the salvaged brass lighting now hung, beer taps installed (pouring Kronenbourg of course) and the back bar crowded with booze. A pair of timber shelves remains empty, waiting to gradually amass odds and ends gifted by regulars, sent from home or collected during one of Falaschetti’s regular op shop runs.

The menu assembles classic French dishes Streit refined while working across Europe and Australia. “We’re trying to get rid of the image that French food always has to be rich and fancy and do something that people can eat on a Wednesday – or any day,” says Falaschetti.

I’ve never understood French onion soup until now. Streit’s is made the traditional way: by sweating a big pot of onions for several hours in beef stock, bay leaf and a hint of sherry vinegar to elevate their sweetness. The steaming ceramic dish that hits our table is filled with a dense, jammy broth that’s bright and syrupy, topped with a toasted cheesy crouton. Even if you’re not into soup as a starter (you should be), order one so you’re set up with a spoon – you’re going to want that later.

Other entrees include buckwheat crepes enveloping a smooth, earthy mix of mushrooms, topped off with stretchy raclette cheese and crisp fried onion. There are snails in their shells with garlic and parsley, a twice-baked cheese soufflé, roasted beets with goat’s cheese mousse and radish salad, and more. Prawns come swimming in a sage and butter sauce with whole cloves of mushy, slow-cooked garlic that Streit hits with a squeeze of fresh lemon on the pass. Lucky you have that spoon, so nothing goes to waste.

Streit deep-fries, rather than pan-fries, his chicken cordon bleu for extra crunch, which works against the tender, oozing core. His secret for keeping the inside moist is a generous knob of butter, plonked on top as the dish slides into the oven.

It takes around 10 minutes for the passionfruit soufflé to bake – providing a welcome beat between the hearty main courses and dessert. It’s creamy and airy, with a small orb of vanilla bean ice-cream riding shotgun to defuse the tartness. If someone wants to start an ASMR channel that’s exclusively creme brulees being cracked with the backs of spoons, you’ve got your first subscriber. Under the glazed sugar seal is a perfectly smooth custard, made for scooping up with shards of almond tuille.

Backing it all up is Falaschetti’s concise wine list that traverses France and holds space for a couple of local favourites. But before you hit the grape juice, we recommend his passionfruit gin Martini – or a classic French 75 – to get the palate humming. 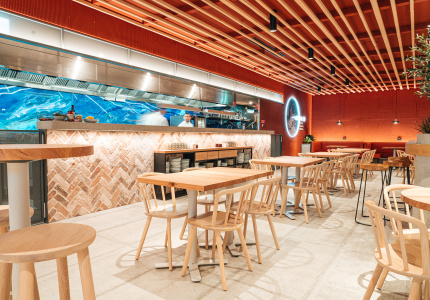