“People talk about ‘Asian fusion’. You could call this ‘Serbian fusion’.” 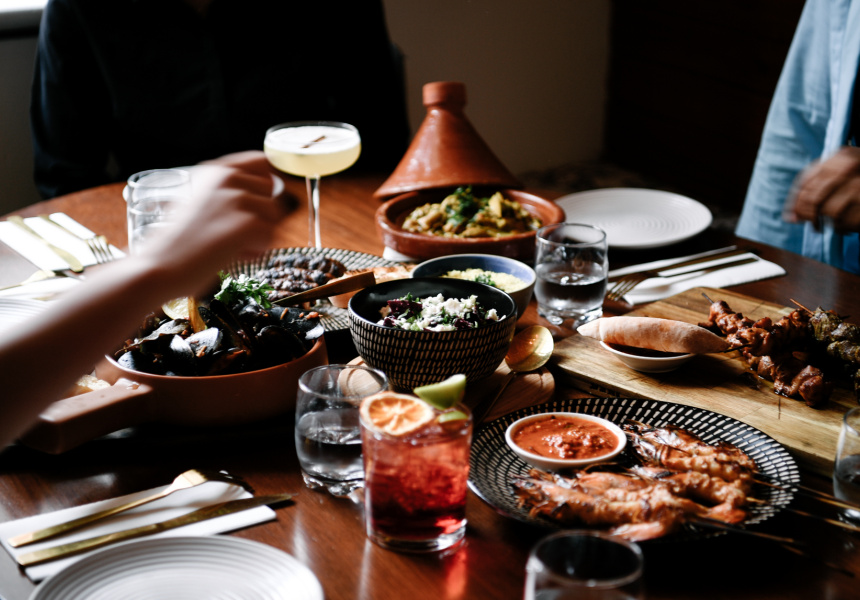 “Serbia falls into both the Balkan and Mediterranean categories,” says Predrag Vujic, whose family owns Kaffana.

The Serbian restaurant opened on Peel Street in 2014 before relocating to Gilbert Place last October. The Vujics operated a pop-up burger bar in the Peel Street site, but that’s now made way for something more permanent.

A lick of white paint separates the restaurant from its moody, dimly lit past life. Where Kaffana’s loaded-up, meat-sweat-inducing platters take hints from the Balkans, the newly minted Sestra (“sister” in Serbian) leans on lighter-flavoured dishes from the Mediterranean.

“People talk about ‘Asian fusion’,” says Vujic. “You could call this ‘Serbian fusion’.” Find influences from Morocco, Turkey, Greece, Italy and Spain throughout the menu. Cevapcici (skinless sausages), for example, “has Greek influences … but the Serbs do it better,” Vujic proclaims, with a smirk.

He runs the kitchen with Moroccan chef Anouar Senah. “Sometimes food is so convoluted it doesn’t resemble what you started with,” says Vujic. The pair’s “honest”, back-to-basics approach, accented by the charcoal grill, involves letting produce – most of which is local – speak for itself. “Charcoal seals in the meat’s flavour, rather than something like smoking, which makes it all about the baste,” Vujic says.

The tight, dozen-dish menu is likely to change entirely each season. Looking to summer there’s charcoal-fired Spencer Gulf prawns, chilli mussels from Port Lincoln, saffron chicken slow-cooked with preserved lemon in a tagine, plus a handful of accompanying salads. Produce-dependent specials – including a potato-based Serbian slant on mousakka – will coast in and out.

Broadsheet’s midday visit ends with a shot of pineapple rum, at Vujic’s insistence. You don’t exist in Adelaide’s best small-bar precinct without absorbing some of the revelry. Sestra’s as much a bar as it is a restaurant.

Cocktails fly the Serbian flag: there’s pear-flavoured slivovitz (plum brandy) in the Mojito, and chilli-infused vodka with sweet vermouth and peppercorns in the Martini. Wines are approachable and local leaning; every few months a different craft brewer will be on-pour from five taps (it’s Moon Dog Brewery at the moment). Sate your appetite with grazing platters, meze and dips outside kitchen hours.