A welcome all-rounder from the people behind Commute and Mornings Coffee. Drop by for locally roasted coffee, thoughtful wines, charcuterie, croquettes, scotch eggs and bagel Sundays. 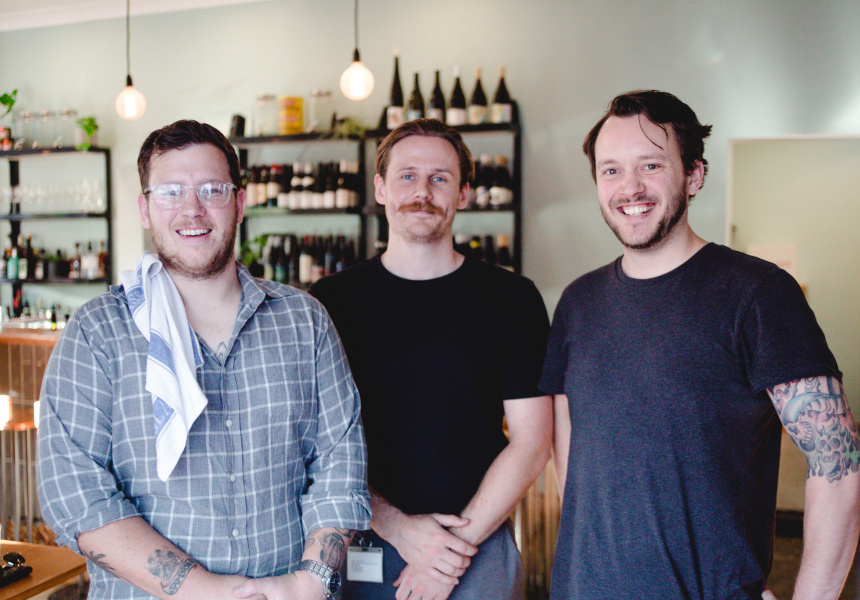 Between them, Good Gilbert’s Wilson Shawyer, Jason Barber and David Train have most bases covered. Shawyer owns sandwich bar Commute, and, until recently, could be found pouring wines at Hellbound; Barber founded Mornings Coffee and its Japanese snack-bar spin-off Konbini; and Train is an award-winning coffee brewer and trader.

It makes sense, then, that their new Goodwood bar has a little something for everyone.

“We didn’t want a pure coffee shop,” says Shawyer. “We wanted to do something that could be fun and versatile.” Somewhere “you can come in for a really nice glass of burgundy, you can have an espresso or you can have a cocktail”.

The breezy neighbourhood bar sits opposite the Capri Theatre on the corner of Goodwood Road and Gilbert Street (hence the name). When Broadsheet first spoke to the trio, they pitched it as the kind of spot that’s as comfortable as hanging out at your mate’s place – only with better wine. And when we visit on opening day, they appear to have met the brief. The place is bright, open and welcoming with bi-fold doors letting in plenty of light and wide-open windows that double as a spot to perch. It’s a place you could just about spend all day in.

A week in, locals have been flocking. Including neighbouring operators. “We’ve been inundated with support and love and everyone’s brought us pot plants to add to our collection,” says Shawyer. “We want people from other businesses to come and say hi and have a glass of wine when they knock off, or a coffee before they knock on.”

The trio overhauled the former Two Sisters site themselves: they built the bar, the banquettes and stools, and laid the tiling and new concrete floor. “It’s something we can put our names to and say, ‘We actually built this for you guys’, not just, ‘We spent half a million dollars on a fit-out’,” says Shawyer. “We want it to be slightly imperfect and some of that shows throughout,” he says, laughing.

The space is all timber and sage with soft tones and warm wood playing off against an industrial concrete floor and tile-clad bar with pressed-metal detailing. Overhead, a line-up of wine bottles skirts the room.

The thoughtfully chosen wine list (currently at 140 wines) is 70 per cent Australian and 30 per cent European. Over the next 12 months Shawyer wants to get to a 50-50 ratio (and a 300-strong line-up). “I want to make sure every time someone comes in they’re not drinking the same stuff,” he says.

For the beer drinkers, there’s a “core range of lagers, pales, sours, ciders” from local brewers such as Little Bang and neighbouring Suburban Brew (“they kept us topped up during the build,” says Shawyer).

The kitchen was completed this week, so expect “hot food” such as mushroom croquettes and scotch eggs to roll-out, alongside a snacky menu of anchovies on toast (zhooshed-up with anchovy-chilli butter, capers and parsley salsa verde); house-made dips such as garam masala hummus and miso-caramel eggplant; and plates of cheese and charcuterie (including slices of pastrami from Shawyer’s Truck’n’Roll project). Other suppliers include Say Cheese and Marino Meats from the market, and Goodwood bakery Boulangerie 113 (just spitting distance away).

Drop by early (or late – the espresso machine and batch brewer will stay on) for coffee. Beans are from Adelaide newcomer Kindred Coffee (head roaster Alex Loft can be found behind the espresso machine on Sundays). “I reckon their filter coffee is without doubt the best in South Australia,” says Shawyer.

Pair your cuppa with a creation from Prospect’s Frankly Bagels, which will take over the kitchen every second Sunday. “We’ll be doing really cool collab versions of their bagels,” says Shawyer. “Katsu sando bagels, fish-finger bagels – all sorts of weird, wacky, fun things.

“We want to hook up with other restaurants and cafes from the northern suburbs and see who wants to come down south for a day every now and then.”

In keeping with their agenda to service the suburbs, Shawyer and co. also plan to host street parties and other activations in the future. 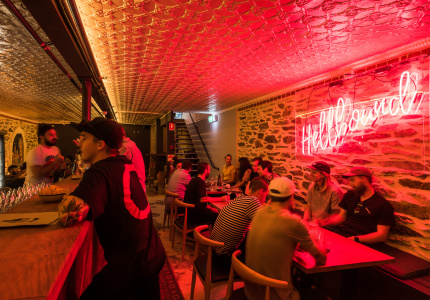