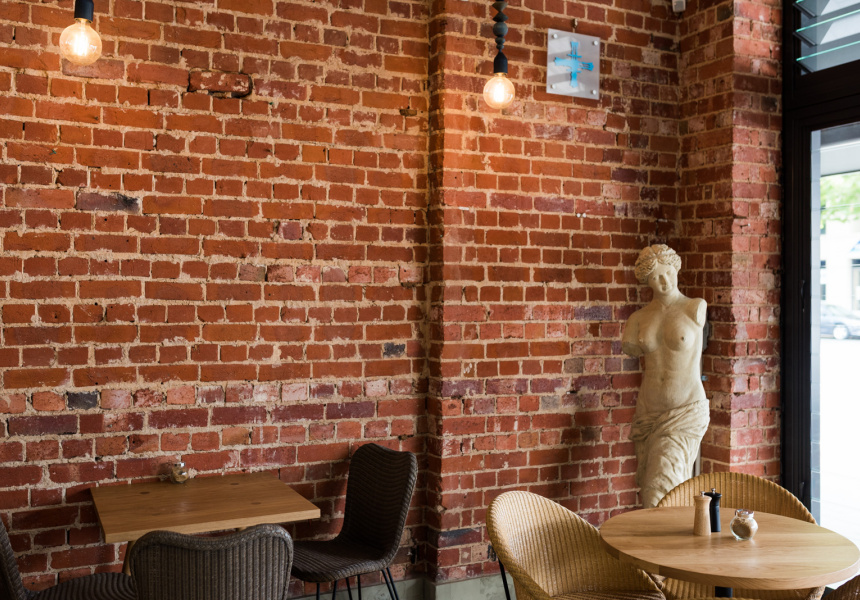 First up is a frappé, made with instant coffee. Louca imports a specific kind of Nescafe (spray-dried, not freeze-dried) from Greece. It’s mixed with cold water, then whizzed in a milkshake maker. “Then you tip the cup upside down – that’s how you know you’ve made it correctly,” Louca says, and demonstrates. The foamy liquid holds firm. He adds ice, water and a dash of milk, saying we’re not ready to take it sketo (without milk) just yet. It’s light, smooth and sweet.

A freddo is a long espresso shot served on ice. For a “freddo cappuccino” evaporated milk is added and it’s topped with cinnamon.

Diaspora also serves familiar espresso beverages, made using a white and timber Modbar machine – one of the most capable (and expensive) pieces of coffee equipment available. “It’s probably worth more than my car,” says Louca.

Diaspora is a term for those who have settled away from their homeland. Louca’s serving the food his community was raised on, and relishes sharing. It’s preserving a legacy. “Our parents aren’t going to be around forever,” Louca says. “A lot of the food that they make … we didn’t want it to die off when they pass.”

For breakfast there’s a buttermilk pancake with halva ice-cream, baked eggs with gigantes (white bean) puree, and compressed watermelon with Greek-yoghurt sorbet and lemon verbena. Or opt for eggs on toast with sides such as loukaniko (pork sausage), saganaki (fried cheese) or even a lamb cutlet. Avocado is (courageously) absent.

The fridge holds hulking slabs of oven-baked dishes and fresh salads – for dine in or to take away – as well as delicate pastries and biscuits. Expect Greek staples such as spanakopita, mousakka and pastitsio (a baked pasta dish). Everything is made in house.

Diaspora stands in a former tailor’s shop. The palette is mainly red brick, cement and marble, save for a preserved moss wall made in Denmark. Neighbours Love Concrete created the outdoor table and worked on the floor.