The food-truck favourite has established a bricks-and-mortar diner on Unley Road – with an expanded menu suitable for meat-eaters, vegans and gluten-free folks alike. 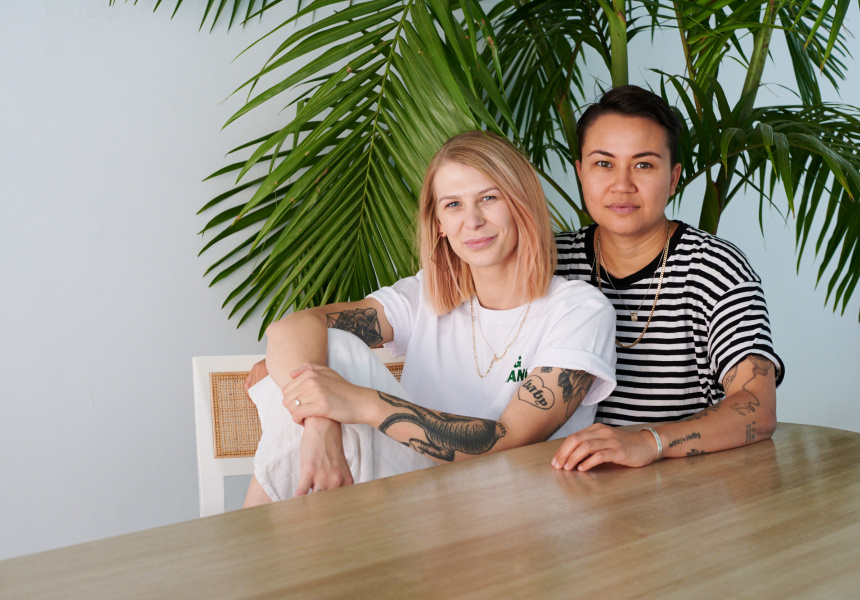 The “all-day deli” from partners Nina Hadinata and Morgen Wynn began life as a Central Market pop-up before graduating to become one of Adelaide’s most popular food trucks (you’ll find the pair regularly parked at festivals and events in their bright yellow truck, Trailer Swift).

As of last week, the Gang Gang concept now has permanent space, in the former Mexican Shop digs on Unley Road. Hadinata and Wynn have stripped the space right back – the walls and floor have been painted white and the room is relatively sparse, with mostly neutral tones (save for the brand’s signature yellow) that keep your eyes focused on the main event: those burgers.

Hadinata grew up in Bali and lived in Los Angeles for five years, where she embraced the city’s food-truck scene wholeheartedly. “I really only ate from the trucks, it’s a whole culture over there,” she says.

The food at Gang Gang synthesises those cuisines: there are tortillas filled with shredded Balinese chicken, sesame mayo and a bright-green, house-made coriander sauce; Indonesian-style corn fritters (with chilli, shallots and spring onions); a buttermilk chicken burger (the Cardi B) with Balinese salsa, slaw and sweet-chilli mayo; and an Indonesian-inspired vegan burger (the Tinie Tempah) with crispy tempeh, sliced beets, alfalfa, pickled onion and satay sauce.

“It’s all what I eat back home,” says Hadinata. “There’s a lot of tempeh on the menu. There’s also a lot of Japanese flavours – it’s just things I love to eat.”

Other influences show up in the Hot Kim chicken burger (with “chilli dust” and house-made kimchi); the Spice Girl cheeseburger with a touch of soy, pickled ginger and wasabi mayo; and an all-American cheeseburger with a smashed patty made from a secret house mince blend (“it’s all about the meat to fat ratio,” says Hadinata), American cheese and all the standard trimmings. Add a side of fries, mozzarella sticks and Hadinata’s house-made hot sauce for extra kick (it’ll soon be bottled and available for purchase).

When Broadsheet stops by for lunch a week in, the place is pumping. “It’s been crazy,” says Hadinata. “I thought we’d have time to figure it out. It’s so different to being in the truck.” For a start, the kitchen space has doubled. “Everyone’s so far away from each other,” Hadinata laughs. But she’s enjoying the slower pace of the static suburban diner.

“We go to a festival and sell 800 to 900 burgers. Here you can take your time, which I’m really enjoying. On the truck it feels like a machine – a well-oiled machine – sometimes you don’t even look up for hours.”

Hadinata is still refining the brunch menu, and plans to introduce several new dishes in the coming weeks. She’s also developing a vegan menu (“so everyone can eat”) and the kitchen has “a designated coeliac fryer”, so all the fries are gluten-free. One staffer is both vegan and coeliac, and Hadinata wants the menu to be as accessible as possible.

Wynn has been working on a selection of house-made sodas, which will be added to the menu soon. Expect lemonade, berry and seasonal flavours such as mango and passionfruit. There’s also coffee from Adelaide micro-roaster Two Fish, which pairs nicely with the pastries from Abbots and Kinney. Asian-inspired pastries by SheOak Baker and cakes by Wynn’s mum are on the way.

“Mum’s a feeder,” says Wynn with a laugh. “She’s already been in here taking orders to deliver [food] to her friends.” The cakes will be inspired by the menu’s broad Asian influence. “You can definitely expect a matcha-something.”

In the new year, Hadinata and Wynn will introduce dinner on Fridays and Saturdays, as well as a Monday dinner series with special dishes such as vegan ramen and nasi campur .