Night’s Watch at Abbots and Kinney

It’s all work and no play for bakers focused on making the perfect pastry. We burn the wee hours with one of the best. 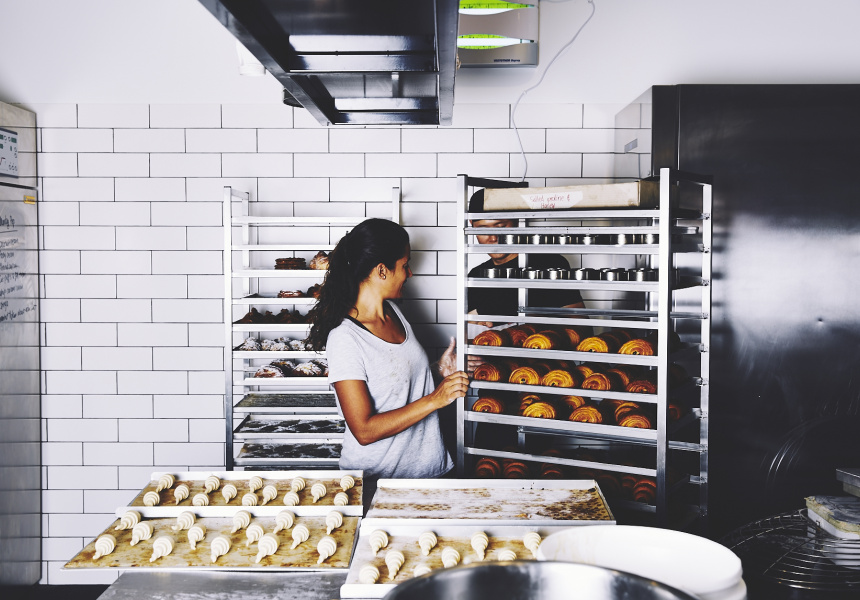 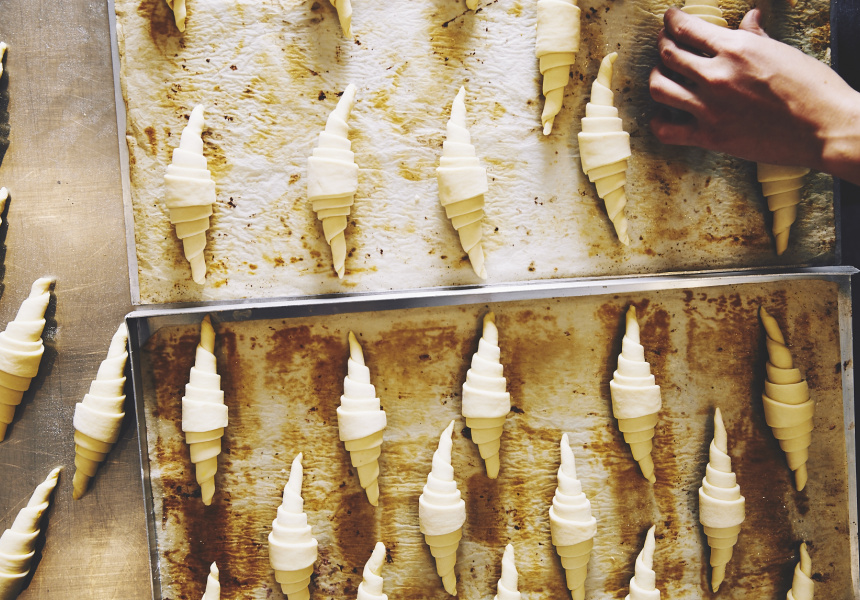 It’s two o’clock on Wednesday morning and Adelaide is sleeping. The city is dark, but there’s action behind closed doors at Pirie Street patisserie Abbots and Kinney.

Owner Jonny Pisanelli, 28, has been up for hours and the tiny kitchen at the rear of the small space smells incredible. Two nimble-fingered employees work beside him with the precision of synchronised swimmers in a pool of butter, flour and dough.

Wholesale orders need to be baked before sunrise and a pile of croissants prepared before doors open at 6.30am. In the background, a little radio cranks out commercial tunes; anything to keep the troops awake and the bake on schedule.

Pisanelli goes hard. It’s the only way he knows how. “If you want to be great at anything you need to put in the work,” he says. “My goal was always to produce a product that, if dropped in London or New York City, would make people go ‘wow’.”

He chats while meticulously folding layers of butter and dough. “Adelaide, being a small city, is hard because there’s so much opening at the moment. You have to have that difference that’s going to make people walk that 100 metres extra to your shop.”

Abbots and Kinney creations are coveted locally and interstate but Pisanelli is not one to relax. “It doesn’t matter if you had a really good review two months ago,” he says. “It doesn’t mean anything. Your reviewer is the person who comes every day and pays. That is your judge.”

As a youngster, growing up in an Italian household, caffeine hits were a social affair. At 17, Pisanelli followed his nose down the barista path and worked at a family friend’s coffee shop. “A switch flicked,” he says. “When that first person said ‘Nice coffee’ I went into overdrive.”

The young enthusiast entered competitions and obsession ensued. “It became my life.”

A trip to the small Italian village of Apollosa in his early twenties set the rolling pin in motion. “I loved helping my aunty bake and decided to pursue it when I got back to Australia,” he says. “It was six months of study. I knew if I didn’t like it I could go back to coffee.”

He hasn’t looked back since, making trips back to Italy and France in pursuit of technique, such as mastering the shell-shaped pastry, sfogliatelle. “I wanted to learn to do it the right way; to make things that weren’t being done here but were mainstream over there.”

Pisanelli experiments with local produce, supplies, workspace temperatures and timing. “There’s definitely a lifetime of learning involved and that’s what I love,” he says. “I wanted to do something that could go well with coffee because I felt like there wasn’t much happening [in Australia]. You could always find good coffee but you couldn’t always find good cakes; not in the same place.”

Sleep deprivation and unsociable hours are part of the job. He yawns between sentences but there’s a twinkle in his eye as he gestures towards the store’s retail section. Takeaway hot chocolate, salted-caramel spreads, jams, granola, mini meringues and chocolate-coated smoked almonds line the wall, all made here or at home. “It’s a bit like you’d see in France. This area has a longer shelf life, which means you can be a bit more creative.”

Pisanelli has the chance to experiment further in May when Tasting Australia hits Adelaide. He is one of six bakers providing bread for the Loaves and Fishes dinner at Port Adelaide’s Hart’s Mill on May 6. They were each asked to bake accompaniments for local fishermen’s catch of the day.

“I chose brioche,” he says. “The secret is it needs to be light. Some brioches can taste a bit more on the savoury side but I like a mixture. It needs to have that really light, fluffy texture and be versatile enough that you can wrap something savoury in it and bake it inside, or make French toast out of it if you really want to.”

Time flies when you’re racing the sun. It’s 6.30am and gym junkies and office workers begin to roll in for their morning coffee, sweet treat and danwich (Danish/sandwich hybrid). Pisanelli looks at the clock. His day is only just getting started. There’s flour to pick up from the farmer, invoicing to do (he usually retreats to the silence of City Library for that) and customers to chat to.

“I’m here until close,” he says. “Yesterday I was here until about 4.30pm. When you know what’s out there you push yourself further. Every day is completely different to the last – you’re only as good as your last bake.”

Tasting Australia’s Loaves and Fishes dinner and panel discussion is hosted by US bakers and stars of doco The Grain Divide, Jeffrey Hamelman and Josey Baker. It’s held on Friday May 6 at 7pm, Hart’s Mill, Port Adelaide. Tickets are $70.