Lost in a Forest part-owner Charlie Lawrence is taking on one of the world’s most hallowed slices. 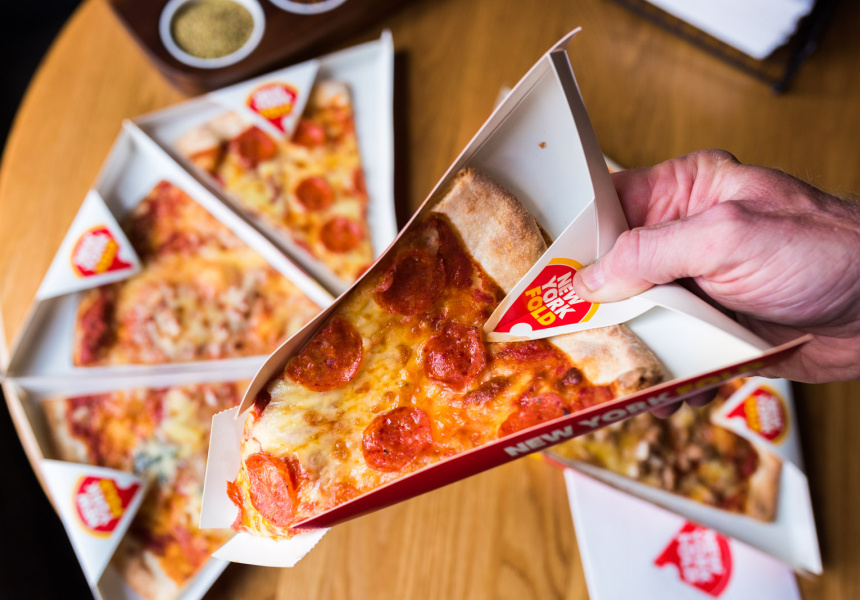 “There is no culinary experience that New Yorkers share more widely and more unanimously than the slice joint,” writes Korsha Wilson in the New York Times.

On holiday a few years ago Lost in a Forest’s part-owner Charlie Lawrence took a deep dive into the by-the-slice world while his wife, in stark contrast, ran the New York Marathon.

His take on the hallowed slice has materialised with help from Renew Adelaide, a not-for-profit that facilitates creative enterprise in vacant spaces. New York Fold is the first resident of a pop-up space replacing the barbershop at BRKLYN.

The Rundle Street bar is a miniaturised version of the New York borough – now with its own (temporary) slice joint serving a style that’s largely unrepresented in Adelaide’s pizza scene.

Here, it’s all about the fold. Where Lost in a Forest’s bases are crisp and hold firm, and Neapolitan bases are soft and often require a knife and fork, New York Fold values pliability above all else. “They don’t get quite as blistered so they won’t crack and crumble – perfect for folding,” says Lawrence.

With a background in packaging design, he’s developed an antidote to the oil-soaked, pizza-cradling paper plates frisbeed around the Empire State. It’s a very specific, triangular-shaped slice tray that folds around your pizza and peels away as you eat it.

Each 18-inch pie is cut into eight slices. Toppings are simple by comparison with Lost in a Forest’s “very cheffy, stylised” menu, says Lawrence.

The $5 “plain slice” – what we’d call “cheese pizza” – is a staple. Every other slice is $7. The Hellboy with pepperoni and chilli-honey is a nod to a same-named slice at Brooklyn pizzeria Paulie Gee’s. At the moment there’s also quattro formaggi; housemade sausage and onion; and broccoli, blue cheese and basil pesto.

As in New York, pizzas are par-cooked, then finished off to order. If BRKLYN’s open, so is New York Fold. That means fast, hot slices – to stay or go – until the early hours.

Lawrence’s business partner, Alex Kebbell, is a web designer and developer. In around two months New York Fold will have its own app allowing users to order a slice to pick up at BRKLYN. Though it will exist beyond the six-month residency, says Lawrence, who foresees the brand popping up in “similar spaces”.

This article was published on February 13. Menu items may have changed.