“I reckon – in a year or two – the west end will be bigger than the east end." 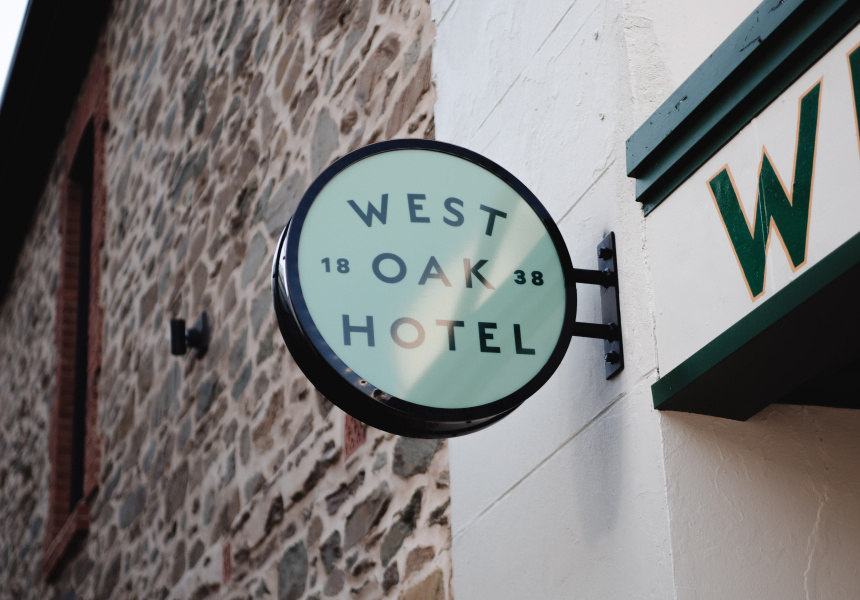 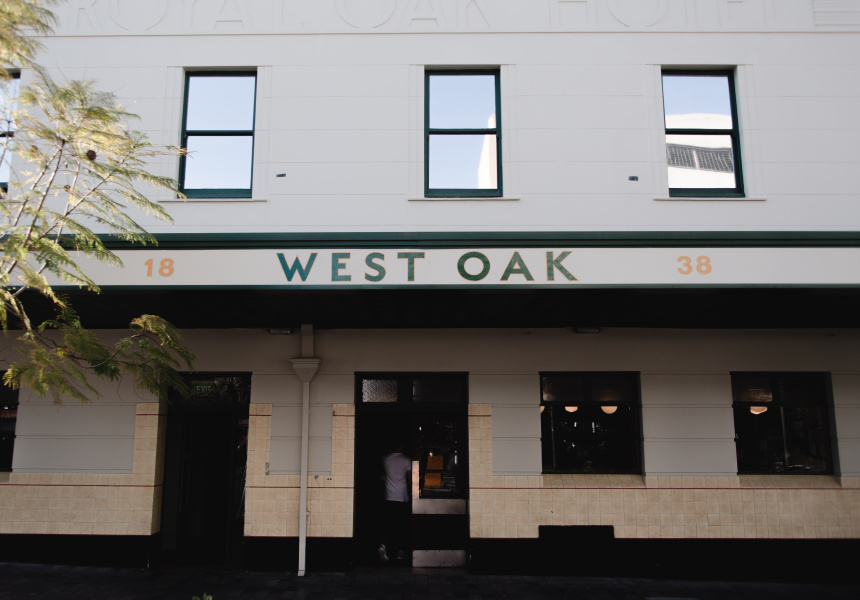 208 Hindley Street – formerly the Worldsend Hotel and before that the Royal Oak Hotel (and originally the Royal Oak and Miner's Arms) – has undergone a number of reincarnations since its erection in 1838.

Now under the stewardship of two sets of brothers and mate Hugo Pedler, it re-opened as the West Oak Hotel last week. Broadsheet met with two of its new custodians – designer Simon Pearce (FRAME Creative) and hotelier Evan Coghlan (Fat Controller) – for a tour and a history lesson.

“It definitely feels more like a restoration than a renovation,” says Coghlan of the latest transformation. Beneath the fresh paint job and slick styling, there’s still the essence of a prototypical Aussie pub. The layout and a few salvaged elements from the original decor (the odd cracked tile, battered timber doors on the old Kelvinator fridges) are nods to the hotel’s legacy, seamlessly integrated into the functional, modern fit-out by FRAME.

“Heaps of people think those are original,” Pearce says, gesturing to the downlights hanging above the front bar. They’re not, but they’re such a good fit they totally could be. There’s sensitivity in FRAME’s rehabilitation of the iconic site. A pair of historical photographs Pearce dug up in the State Library now hangs in the old pool room, and a lithograph he had framed adorns another wall. It’s entitled Hindley Street Looking East and features a gentleman on horseback riding down a wide dirt road.

The modern pub serves beers and wines with a local flavour. A mini deli-cafe has been added, facing out to Fenn Place – a busy route for uni students commuting between campuses and visitors to the new Royal Adelaide Hospital. Mount Gambier’s Mirkro Coffee Roasters is supplying the beans, and experienced barista Scott Tarasenko (Larry and Ladd, Coffee Branch) is in charge. The full kitchen remains intact, but the menu is being kept simple while the new business establishes itself. On offer for now are charcuterie boards and a selection of “Pub Sangas”. We recommend the three-cheese and jerk beans.

Upstairs is The Jolly Bar – named after surgeon Mark Jolly – which has a detailed history all of its own. “We were basically bequeathed an entire bar,” Pearce says. Hidden somewhere inside the old Royal Adelaide Hospital, The Jolly Bar was a sort of speakeasy for the Resident Medical Officers (RMO) Association. When asked how exactly it came to be upstairs at West Oak, Pierce explains that it was rescued from demolition by another co-owner – surgeon and Evan’s brother – Patrick. Another room on the upper storey houses a gallery for local artists.

Back downstairs, the beer garden has been completely overhauled to include a live-music stage. Coghlan is keen to hear bands back in the place. “There’s been live-music here for, like, 150 years,” he says. He’s even hatching plans with neighbour the University of South Australia for larger events in the laneway and on Hindley Street. “They recognise the need for something like this.”

With Uni SA’s graduation hall going up across the road; theirs and the University of Adelaide’s new premises on North Terrace, and the new hospital just a skip away, Coghlan is confident the area will boom. “I reckon – in a year or two – the west end will be bigger than the east end. There you go, I said it.”