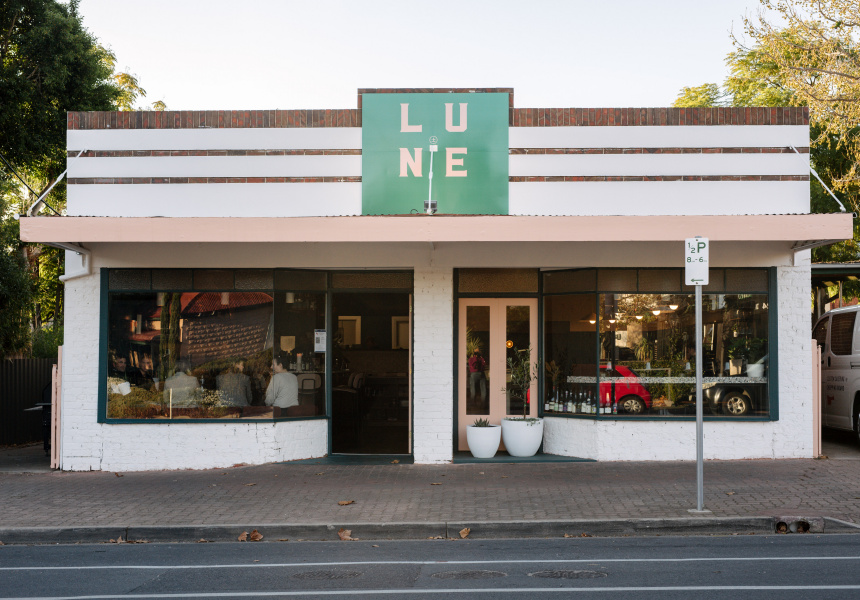 While the super blood moon was making headlines at the close of May, another lunar event occurred more quietly in Beulah Park: the rise of Bar Lune, a cozy new wine bar on the eastern end of The Parade.

The venue, which sits in the former Saha site (whose owners moved location after a kitchen fire in late 2019), doesn’t reveal much about its previous life. The formerly bright, airy interior has made way for a sleek space – designed by interior architect Georgie Shepherd – with dark blue timber, terrazzo benches, mustard bar stools and brown tiles.

“We wanted to build an atmosphere,” co-owner Sam Worrall-Thompson tells Broadsheet when we visit. “We wanted to open it up a bit, and make it not so closed off.” Although one wall still divides the space, a few others have been removed to make way for a main seating area. On quieter nights, a fabric partition can be pulled across to create a more intimate bar setting – which is ideal for interactions between staff and customers.

“We’re really trying to push our staff to get to know our regulars by name,” says Worrall-Thompson, who is also the executive chef at Fine and Fettle and Community.

Bar Lune – not to be confused with Luna on Pulteney Street (“Three weeks before we started building, Luna opened … I was like, ‘Boys, what are we going to do?’ And everyone was stuck on the four letters, so we just changed one of them,” says Worrall-Thompson), nor Melbourne’s famous Lune Croissanterie – is a neighbourhood bar with locals in mind. As such, approachability is a driving factor for Worrall-Thompson and partners Toby Porter (ex-d’Arenberg), Josh De Haas (Chopping Board Catering), Tony Bales (ex-Pink Moon Saloon) and Brett Hicks-Maitland (Community).

It’s an ethos that’s reflected in their wine list (on pour in its first week is Murdoch Hill, Koerner and Porter's own Mazi Wines). “Tobes has been quite mindful to keep something on there for everyone,” says Worrall-Thompson. “We don’t want to push anyone away.” The same goes for the cocktail list, which is comprised mostly of classics. The Strawberry East Side (gin, cocchi blanco, lemon, sugar, cucumber, strawberry and lime) has proved popular so far.

For people who know their wine – or want to know more – a wine wall displays the higher-end drops available. “The idea here … eventually, with Toby’s expertise, is to just fill that whole wall,” says Worrall-Thompson. “And one of our concepts is, maybe on the last Sunday of the month, to come and grab one of the expensive bottles off the wall and just pay cost price, plus corkage. So you can drink the best of the best, for a fraction of the price.”

As for the food, Worrall-Thompson has designed a menu of small plates for sharing. There’s cacio e pepe with pecorino, parmesan and Gruyere; Wagyu katsu sandos; grilled scallops; soldiers piled high with barramundi, shellfish mayo, cornichon, bottarga, roe and lemon; and barbequed squid with chilli sambal and burnt lemon. Much of it is cooked over charcoal.

As the weather warms up, the driveway adjoining the building will be turned into a laneway of sorts with outdoor seating. The bar will also make use of an existing private dining area out the back.