The UK-born chef has joined the East Terrace eatery after stints at Sydney’s Quay, Hartsyard and Hubert. Expect a new menu of Greek-leaning dishes such as woodfired tahini chocolate fondant and honey-drizzled saganaki. 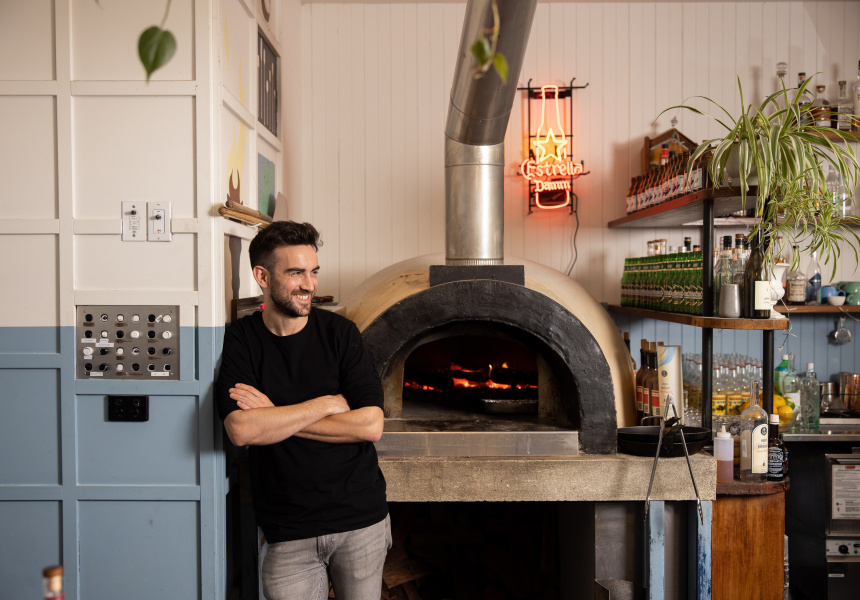 There’s a new face presiding over the pans at Yiasou George. After opening under the direction of Nathan Sasi (before he opened Leigh Street Wine Room) the East Terrace eatery has pulled another chef from Sydney to head the kitchen: Harry Bourne, who’s come over from celebrated Sydney bistro Hubert.

Bourne moved to Australia from the UK in 2011 to work at Peter Gilmore’s quintessential Sydney fine diner Quay. (After then-senior-sous-chef Analiese Gregory told him they wouldn’t hire chefs without completing a trial shift, he booked a trip from Bristol to Sydney – landing 11pm and starting at 7am the next morning.)

He’s since worked at popular Sydney eateries Hartsyard and Love Supreme before a year-long stint back in the UK at Luca, a venue founded by the team behind The Clove Club (which ranked 27 in the World’s Top 50 restaurants in 2019). “Luca was a very beautiful restaurant … their ethos was similar to mine: produce was king and it was our job as chefs to try and highlight that,” says Bourne.

A (supposedly temporary) trip back to Sydney in March 2020 to sit his Australian citizenship exam left him grounded there. “The second day I was here I got a call from Johnny [Smith] the [Luca] owner to say he’d made the excruciating decision to close the restaurant,” says Bourne. “Then on the third day, on the way to my exam, I checked my flights only to find that they’d been cancelled and re-booking them was going to cost $20,000-plus with no guarantee I wouldn’t be stranded somewhere with little to no consular assistance, so I made the call to stay.”

He took a job as senior sous chef at Hubert – until he was poached by The Big Easy Group to oversee the Yiasou George menu (and that of The Stag next door and soon-to-open Bowden Brewing). It wasn’t a hard sell.

“I’d fallen in love with the produce of South Australia,” says Bourne. “From the amazing beef out of Mayura Station to the oysters from Coffin Bay farmers, there is so much diversity and quality to explore and discover. I have only been here a short time but every day I’ve found something new and exciting to cook with. Wandering around the Central Market is a constant source of inspiration for me.”

Bourne took five with Broadsheet to discuss his new role, his non-negotiables in the kitchen, and his plans for the Mediterranean eatery.

Why did you decide to join Yiasou George?
I loved Yiasou’s potential; it’s a fun, vibrant, beautiful restaurant with the beating heart of the woodfire oven. It’s a place to explore and play while not taking itself too seriously. I could imagine having seasoned regulars coming in to try that week’s creations, or long tables of friends enjoying the best time, drinking ouzo, feasting on the woodfired lamb shoulder and all our classics. It’s a place for everyone.

Do you have any big plans or ideas for the new role?
The plan is simple – scour South Australia for the best produce I can find and cook and present it in the most exciting and delicious way. Provenance and seasonality under a Mediterranean influence will be our guidelines in the kitchen. I moved to Adelaide because I fell in love with South Australian produce so the idea of using snapper from New Zealand or prawns from Asia is bewildering to me. Locality and seasonality are totally non-negotiable; I mean, come on, Coffin Bay oysters, beef from Mayura Station or even late-summer berries from the Hills.

It’s so important, especially for the young chefs in the kitchen, to have that sense of pride in where we are and what we’re cooking. We’ve already taken a daytrip up to Ngeringa to their amazing biodynamic farm with my kitchen team, so we can see what they’re growing and also taste produce straight out of the ground. These daytrips will be a regular occurrence for us in the kitchen, to be hands-on and to learn about the processes of our ingredients before they hit our chopping boards.

Are you bringing along any ideas or dishes you’re known for?
I don’t like the idea of a signature dish [where] a chef has one all year round regardless of seasonal availability. I’m known for constant change – I aim to change a few dishes on the menu every week, and I want the chefs to be excited and engaged with what they are making. I also want to give our guests a reason to come back again and again; they know they can come in for the staples that will always be there but also for seasonal treats that might only be on for a day.

Our team foraged some beautiful pine mushrooms last week and my sous chef Claire put on an amazing dish of slow roasted then chargrilled pine mushrooms, a butter made from all the liquid that came out of the mushrooms, blended with herbs and pine nuts, seasoned with a local soy sauce from the Adelaide Hills, topped with hand-picked biodynamic roasted almonds from a farm down in Willunga.

What are some cool new dishes/ideas we'll see on the menu?
At the moment we are playing around with a slow-braised beef-shin moussaka as well as a woodfired tahini chocolate fondant, and a flambé tableside saganaki, drenched in this phenomenal honey from the Adelaide Hills. We’ve just started using Ngeringa’s amazing biodynamic farm for all our vegetables, so you can expect plenty of amazing seasonal veg dishes.