A New Era For Sparkke at the Whitmore

The brewpub’s evolution continues with the launch of its restaurant, Fare, which draws on both the fine-dining skills and Anglo-Indian heritage of chef Emma McCaskill. 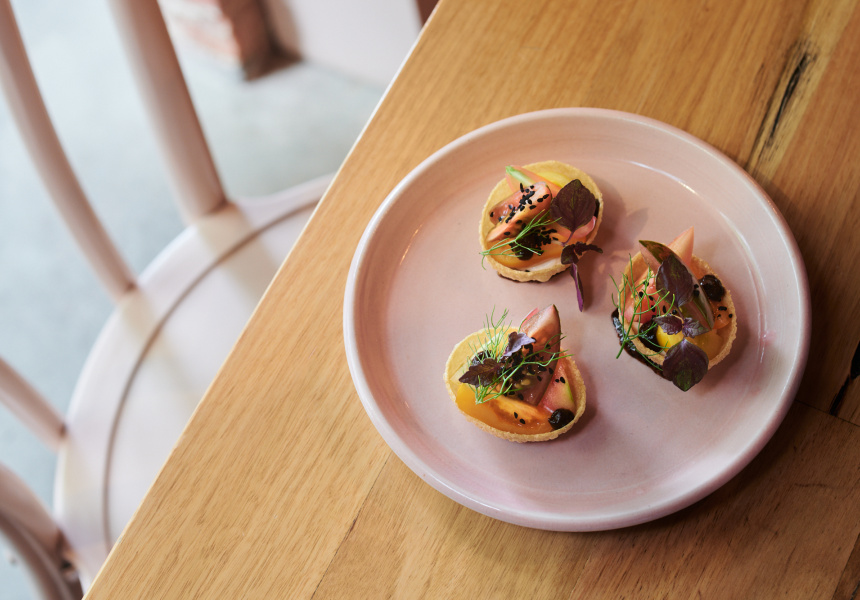 When Emma McCaskill took over the pans at Sparkke at the Whitmore last year, it was a remarkable leap for the chef, whose CV up until that point was dotted with time in fine-dining kitchens.

Her 18-year career includes stints at Tetsuya’s (Sydney), Ezard (Melbourne) and Sat Bains (Nottingham, England) before coming home to front Magill Estate Restaurant and later The Pot (now Nido). She was the first non-Japanese chef to work at Narisawa in Tokyo, a two-Michelin-starred restaurant and number 22 on the 2019 World’s 50 Best Restaurants list.

Now, we’re sitting in Sparkke, the CBD brewpub where she presides over a wholly more approachable menu than the likes she trained for. Not even McCaskill could have anticipated it. When co-owner Rose Kentish first offered her the role, she turned it down. “I was concerned that by transitioning into a brewpub I’d be taking a step back in my career,” she tells Broadsheet.

After leaving The Pot, McCaskill took a temporary role at Botanic Gardens Restaurant. But she stayed in touch with Kentish. “I was constantly visiting so I saw the progress … and I thought, ‘This isn’t a pub, this is special’,” she says. “The opportunity came up again to take over the food role here, and I said yes … I thought, ‘I really want to commit to changing the stigma around pub food’.”

The menu slowly began to shift, eventually splitting in two, with one catering to the 60-seat restaurant and one to the wider pub crowd. It allowed the restaurant, and McCaskill’s finely tuned expertise, to stand separate from her more approachable pub menu.

With the evolution comes a rebrand for the restaurant, now called Fare, which officially launches on Sunday March 8, International Women’s Day (and the venue’s first birthday). “It’s such a different space compared to the rest of the pub now,” says McCaskill. “It has its own community of guests who are very different to the rest of the pub … we felt it deserved its own name.”

“I’ve always done super fine dining [with] tweezers, pipettes, water bath, everything measured to the degree and gram. And I’ve never had a chance to cook, in a professional sense, [the food of] my heritage,” says McCaskill.

“My grandma looked after me when I was little … so we grew up with dal and rice. We’d have parathas and jam for breakfast … so this has more meaning for me because it’s nostalgic … it’s very familiar to me.”

Other dishes include crunchy, buttery baby turnips with miso and nori butter; sustainably farmed smoked Hiramasa kingfish from the Spencer Gulf with a turmeric and finger-lime dressing; and pork, ginger and Szechuan dumplings in a roast-chicken broth. Larger options include hibachi-grilled Coorong mullet with pickled kohlrabi, and crispy roasted (half) chicken with chargrilled corn, fermented chilli and lime.

The chook, which arrives whole from Nomad Farms, is broken down across four dishes – drunken chicken, chicken-liver parfait, the roast and the broth – to ensure every bit is used. McCaskill says the separation between the pub and restaurant menus has “enabled us to start using ingredients in their entirety”. Another example? The Hiramasa kingfish, which is used for sashimi and its dressing (made by roasting the bones in a stock) in the restaurant. The wings and remaining flesh then becomes a rillette, which appears on the pub menu.

McCaskill’s dedication to sustainability extends beyond the menu. She’s just launched a new program – The Kitchen Sisters – designed to mentor women, who are vastly underrepresented in an industry dominated by men. As part of the program, young female chefs will have the opportunity to work in different kitchens around the country for one week as part of a kitchen exchange. The first swap is between Fare and Alana Sapwell’s Arc Dining in Brisbane.

Fare and The Kitchen Sisters program will officially launch on March 8 with a six-course lunch. McCaskill will be joined by retired legendary Adelaide chef Cath Kerry; winemaker and Sparkke co-founder Rose Kentish; and wine guru Liinaa Berry. Tickets are $95.