Step inside Adelaide’s New York-themed bar next month to try Cheekies Hot Chicken. The hottest level is coated in a blend of four different chillies, including the infamous Carolina reaper. 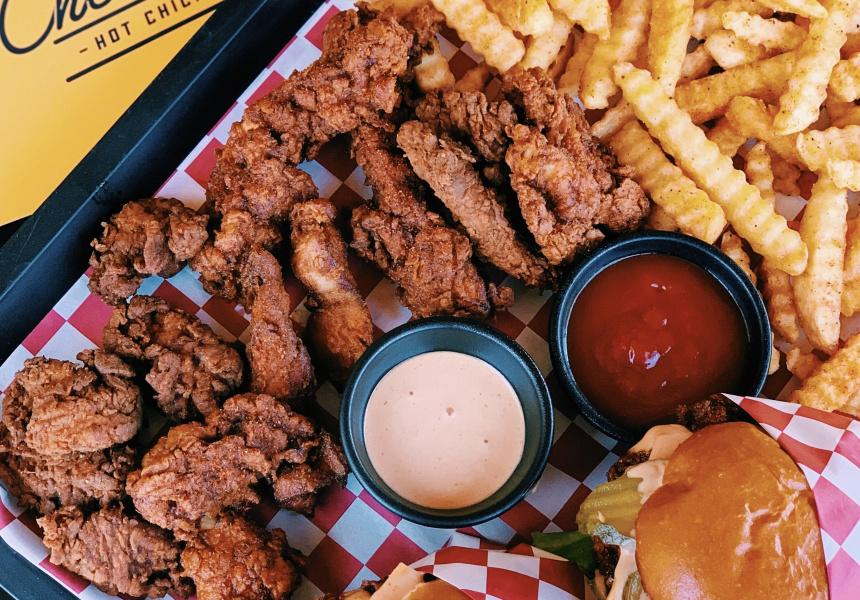 The names given to the world’s hottest chillies always seem so intimidating. The ghost pepper. The Carolina reaper. It’s no wonder. They’re the stuff of alarming news headlines. But when added to juicy, soon-to-be-fried chicken? Things get a little more enticing.

Enter Cheekies Hot Chicken, a new fried-chicken project bringing some seriously spicy bird to Adelaide’s east end. Inspired by Nashville’s famous hot chicken, the birds are coated in a dry rub that, at the hotter levels, contains a blend of four different types of chillies: cayenne peppers, habaneros and those aforementioned ghost peppers and Carolina reapers. Prepare to get sweaty.

The new venture launches at Brklyn during the Fringe, and will operate out of the same kitchen as hotdog pop-up Let’s Be Frank. It follows the opening of suburban hot-chicken joint Buk Buk Southern Hot late last year – a testament to Adelaide’s growing love affair with spicy fried bird.

Co-owner and founder of both Brklyn and Cheekies, Rashaad Cézar, started dreaming up the concept two years ago after being introduced to Nashville-style hot chicken by a friend. He knew he had to go to the source and explore further. With business partner Rachael Sharples, he traversed the States in search of chicken, finding himself at iconic spots such as Hattie B’s Hot Chicken and Howlin’ Ray’s.

“I kind of fell in love with that whole concept … it was beyond the chicken itself,” says Cézar. “Whilst the chicken was tasty, there was a massive culture around it. People are always going there and trying the different heat levels. It’s a social thing.”

Cheekies will serve tenders (which you can order at different heat levels) as well as a spicy-chicken burger, plus fries and other sides. Cézar says the chicken will be brined for at least half a day in buttermilk, then added to a mix of bourbon and pickle juice for “an extra American kick”, then coated in a dry-rub.

If all goes well, a bricks-and-mortar Cheekies is on the horizon. There are plans to expand to share plates, wings, sandwiches (including a vegan “hot chicken” version), and mac’n’cheese.

Cheekies Hot Chicken will pop-up inside Brklyn from February 14.