Inside, an inconspicuous doorway leads to the basement. What lies beneath? 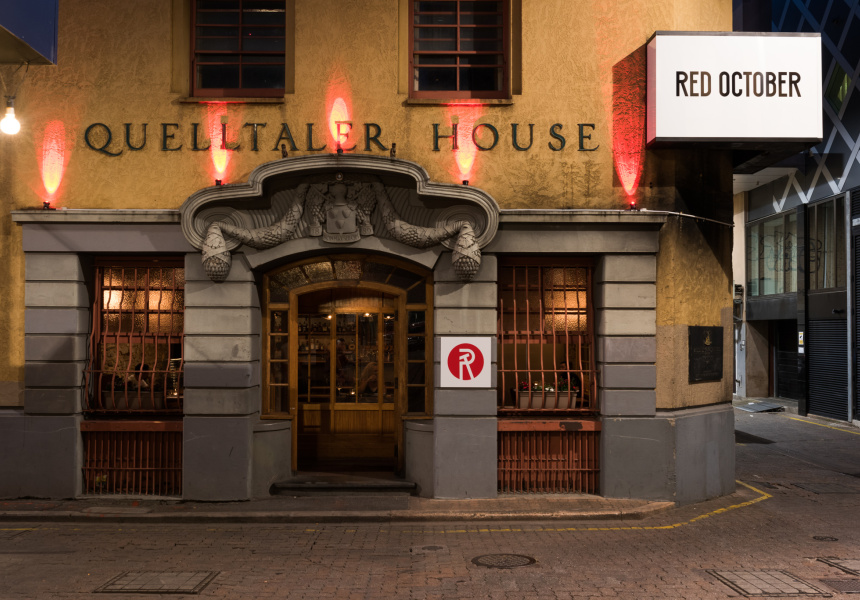 But what is “modern Russian”? “It isn’t just dumplings and borscht,” says Tazhdynov. Red October’s menu takes hints from the 16 republics (“from Sochi to the Middle East”) that once comprised the Soviet Union.

“In Russia it’s more about how you eat, not what you eat,” explains Tazhdynov. “It’s a celebration. It’s a five- or six-hour feast. We’re trying to cut it a bit shorter than that, though.”

With a Russian feast as his reference point, head chef Sam Clarkson (ex-Panacea) has extracted a collection of dishes that make sense in a restaurant context.

Dishes revisit their roots but are “revamped” with local produce. Consider the potato-based Russian salad. “Nowadays it has no seafood,” Tazhdynov says. “In the Russian Empire it was made with hard-boiled, rubbery yabbies.” Tracing it back to its origins, chef Clarkson subs in Fleurieu-caught marron.

The “gastropub” label comes with certain expectations. “We had to have fish and chips,” says Tazhdynov. His reinvented fish as chips is deep-fried whitebait. Chicken Kiev stands in for the humble parmi. A late-night menu rolls out at 11pm.

Eight taps pour Australian beers. The Russian stuff only comes in bottles and stubbies. Bourbon is the spirit of choice “because it goes well with beer.” Expect boilermakers.

The redesign centred on returning the building – most recently a Malaysian restaurant – to its 1890s roots. A construction engineer by trade, Tazhdynov envisioned raw materials. Many were hidden in plain sight. Heritage stonework once concealed behind gyprock was painstakingly preserved. Concrete and timber complete the fit-out.

A break in the stonework outlines an inconspicuous doorway. Slink through it, descend the stairs, and you’ll stumble upon Suzie Wong. The dimly lit “Hong Kong-style” speakeasy has the same name as the first bar the couple worked at together in Moscow.

Three hundred-plus whiskies line a centrepiece bar. It’s the biggest collection in Adelaide. “There are a few boxes we’ve been collecting at Bibliotheca and a few allocated to us a year-or-so ago,” Tazhdynov says. He’s expecting to tip 500 bottles in the coming weeks.

Currently inspired by the four seasons, the seven-strong cocktail list runs alongside a narrative about mythological Asian figure Sun Wukong (also known as Monkey King). Ingredients such as shochu (a Japanese liquor distilled from barley); yuzu (a Japanese citrus fruit); and nori fit the bill. The cocktails will change. Their Asian footing won’t.

A few massive chunks of red gum were picked up on Gumtree, ironically. With carpenter (and Bibliotheca bartender) Jake Mackinlay’s expertise, they formed the bar-top and a few striking wood-grained tables. Cushy booth seating lines the walls.

Practicality reigns supreme. “Getting rid of rubbish is expensive … so is buying new stuff,” says Tazhdynov. Almost everything has been repurposed: timber ripped from the walls became framework; left-behind crosshatched chairs had their legs removed to become an L-shaped booth. 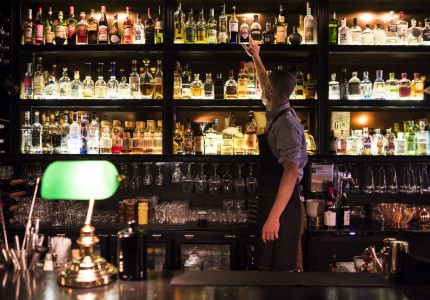