When Lot 100's head chef Tom Bubner found himself with leftover pizza dough, Mismatch decided to turn it into beer. The result is a classic, slightly salty lager that pairs perfectly with pizza (naturally). 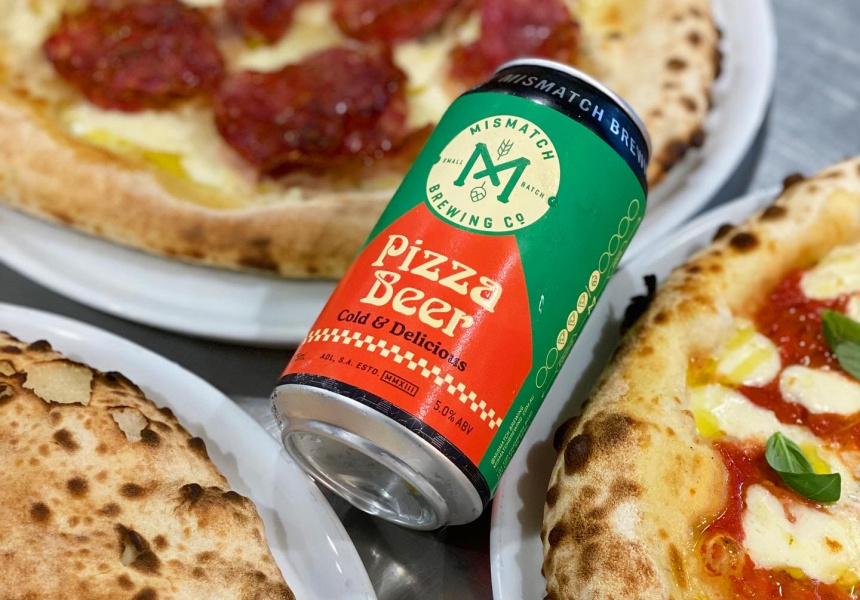 With the postponement of Tasting Australia, and, consequently, Lot 100’s Ultimate Pizza Party, head chef Tom Bubner suddenly found himself with a vast excess of pizza dough lying around and no one to eat it. So Mismatch, which makes its beers on the same Hay Valley property, decided to chuck the dough into some beer instead.

An embodiment of Lot 100’s sustainability focus, the drink takes inspiration from the various types of bread beers, toast ales and pastry stouts on the market. But Mismatch head brewer Ewan Brewerton says the use of pizza dough is a new one.

“I’ve never seen it been done before, and I didn’t have many reference points on what to do or how to do it, so it was very experimental,” he tells Broadsheet.

“We cooked all [the dough] out in the pizza oven as per normal, then we designed an Italian-style lager around it. Bubner’s pizza doughs are quite salty, so we wanted that [element] to be the hero in the beer.”

The aptly named Pizza Beer is a classic, easy-drinking lager, whose slight bitterness and salty spine make it a perfect partner for pizza (naturally).

The “event beer”, as Brewerton describes it, was intended as a limited release. But high demand might see it join the Mismatch stable.

“We’ve had amazing pull-through and a lot of interest in the beer, so whenever there’s leftover dough we’ll probably do another batch,” he says.

Brewerton and his team have also been busy working on a selection of dark beers to get us through winter. Their annual Chocolate Stout returns, this time brewed with pure, melted chocolate sourced from Adelaide Hills icon Melba’s, alongside a “straight up, traditional stout” that will likely become part of the core range.

Alongside these stouts comes their big brother, a Russian imperial stout aged in Buffalo Trace bourbon barrels for four months, giving it a whopping 12.75 per cent ABV. The new brew, which sold out in pre-sale, was originally created for the hugely popular Gabs beer festival held annually in Melbourne, Sydney and Brisbane, but postponed this year.

What might be Mismatch’s most acclaimed beer, Evil Archie’s Red IPA, has also gotten a limited-release spin-off in the form of the double dry hopped Super Evil Archie’s. The new brew takes the original Evil Archie’s, hop-driven in its own right, and cranks it up with “old-school hops” such as Cascade, Simcoe, Chinook and Centennial, says Brewerton. Only 800 litres of the stuff was produced, so don't sleep on it.

The Pizza Beer and Chocolate Stout are currently available for online pre-sale. The rest will be released on June 22 at Mismatch stockists and Lot 100, which reopens this weekend with reduced capacity.