At Mimi, the Team Behind Plus 82 Pocha Brings Modern Thai to Sturt Street Cooking Thai food without a wok is not easy. But for Naphachama “Nokie” Hongsakaola, head chef at modern Thai restaurant Mimi, it’s all in a day’s work.

Hongsakaola and the team at the Sturt Street restaurant, which opened late last year, realised they would have to make do – at least for the time being – with the Western-style kitchen they inherited from previous occupants, East of Norman. The decor has changed in parts, but the airy, modern fit-out by interior designer Claire Kneebone (whose portfolio includes 2KW, Maybe Mae and Bread & Bone) is largely the same.

The circumstances, luckily, happen to play to Hongsakaola’s strengths. “My background is cooking French food in Sydney, so I use French techniques,” says Hongsakaola. “But the flavours [at Mimi] are more Asian.”

Mimi is the first foray into Thai cuisine for the Plus 82 group, which is behind the successful Plus 82 Pocha and new Korean barbeque restaurant, Plus 82 Gogi. Motivated by Plus 82 Pocha’s success, the team worked on Mimi and Gogi simultaneously, often putting in 20-hour days to complete the renovations on time.

Hongsakaola, who grew up in Bangkok, met Mimi co-owner Steven Lee soon after she moved to Adelaide. They kept in touch, without any solid business plans, until Lee and Hyunwoo Kang (who met while studying at Le Cordon Bleu and formed Plus 82 Pocha) approached Hongsakaola with their vision for a Thai restaurant. They’d already set their sights on the Sturt Street spot and felt it was the right fit. Hongsakaola agreed. “I used to live nearby here, and I liked the building. So I thought, ‘Okay! Let’s do it’.”

Subverting expectations of what a Thai restaurant should be is a passion of both the co-owners and Hongsakaola. At first glance, typical Thai flavours such as galangal, coconut milk and chilli take their rightful place on the seasonal menu. On closer inspection, the dishes are a little off-kilter.

The classic Isan (northern Thai) dish som tum (green papaya salad) is topped with a (secret) sauce that’s more subtle than its traditional counterpart. The Crying Tiger, or seua rong hai, (sliced sirloin steak with a spicy sauce) features the unusual inclusions of fennel and cucumber. Even the Thai green curry strays from tradition: the curry is served more as a sauce atop slices of chicken, and is accompanied by grilled broccolini and eggplant. There’s also red curry with confit duck leg, Coffin Bay oysters served in tangy nahm jim sauce (green-chilli dressing with lime juice), and pad thai topped with slabs of fried tofu.

Hongsakaola’s favourite dish on the menu is another riff on Thai cuisine: pan-fried salmon with a Korean-inspired kimchi and tom yum broth. “The salmon [in this dish] has crispy skin, and it goes well with the slightly sour, slightly salty broth of the tom yum,” says Hongsakaola. “The oiliness of the salmon goes well with the kimchi, too.”

“When she came up with the idea for that dish, I thought, ‘Kimchi and tom yum? Really?’ But you’ve got to try it. It’s our signature dish,” adds co-owner Lee.

A weekend-only brunch menu includes Thai basil and chilli omelette, poached eggs with edamame and avocado, egg and bacon bun, and a selection of pastries. Five Senses coffee is available all day, and South Australian wines are aplenty. 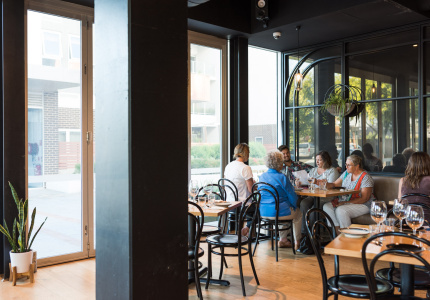