Charcoal-grilled chook, a crustless club sandwich and a chicken gravy roll – the Shobosho crew is throwing back to the classic Australian chicken shop. 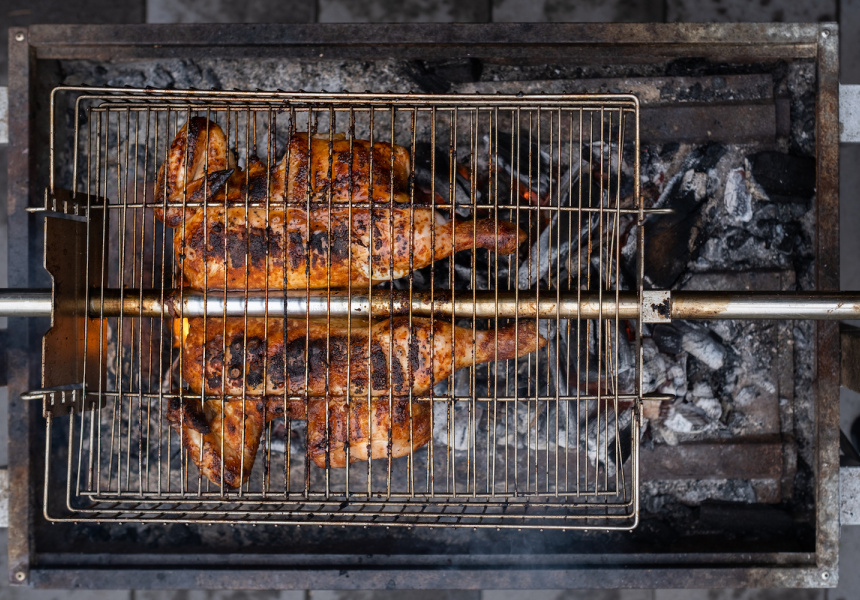 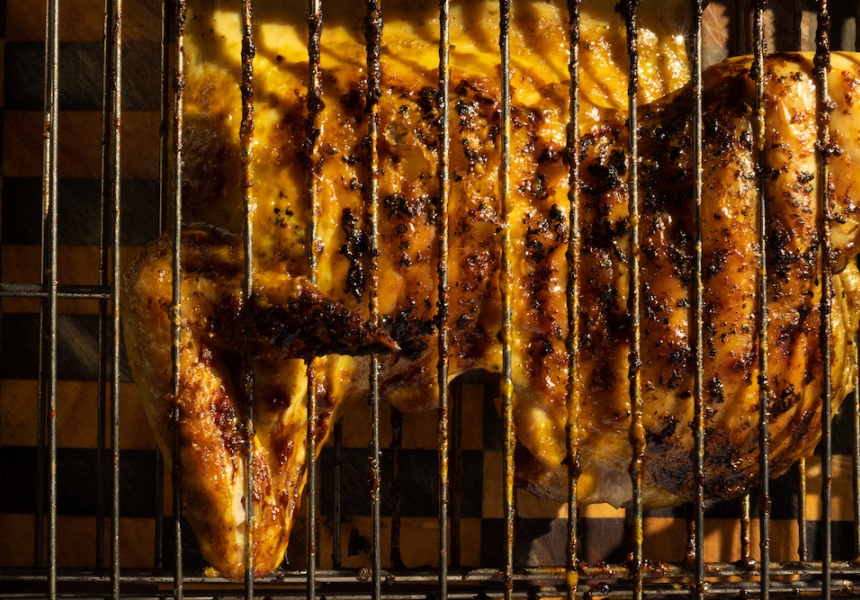 Adam Liston has built his career on cooking skewered chook over coals, from his Northern Light Yakitori Bar in Melbourne to his homecoming with Leigh Street “firehouse” Shobosho and its snug spin-off, Sho. His new project Joybird expands on the concept with flame-licked rotisserie chicken.

The 120-seat corner site will open in Hyde Park in August (just a few doors down from sister restaurant Nido), merging old-school takeaway with restaurant-quality fare.

“The difference between this and being at the Goodwood chicken shop, which I love, is those little chef touches,” Liston tells Broadsheet. “We thought we’d play to our strengths, so that’s why there’s a little bit of Asia coming through [in the flavours] like with the curry, the honey soy, the yuzu and sake that’s been sprayed over the chicken … We’re trying to make it special.”

Back in April Liston gave us some indication of what to expect on the menu, including three types of charcoal chook, chicken-fat-roasted potatoes and cocktails designed by co-owner Ollie Margan (Maybe Mae, West).

Add to that yiros-style wraps (spit-grilled char siu chicken and lamb sliced and stuffed into flat breads and flaky, buttery roti), “Chinatown slaw” with Vietnamese coriander and Thai basil, and chicken wings smothered in a super spicy, glowing red house sriracha (that’ll be sold by the bottle). There’ll also be a house red and white by Delinquente Wine Co.

Once a week, Liston, Kim and Nagaya have been meeting to test and tweak the recipes. With the shop still in the construction phase, the three have been working out of Liston’s outdoor kitchen, complete with rotisserie and wood oven. While it’s not quite the $40,000 custom grill being installed at Joybird, the results are a fair indication of what’s to come. So we joined the team for a preview. 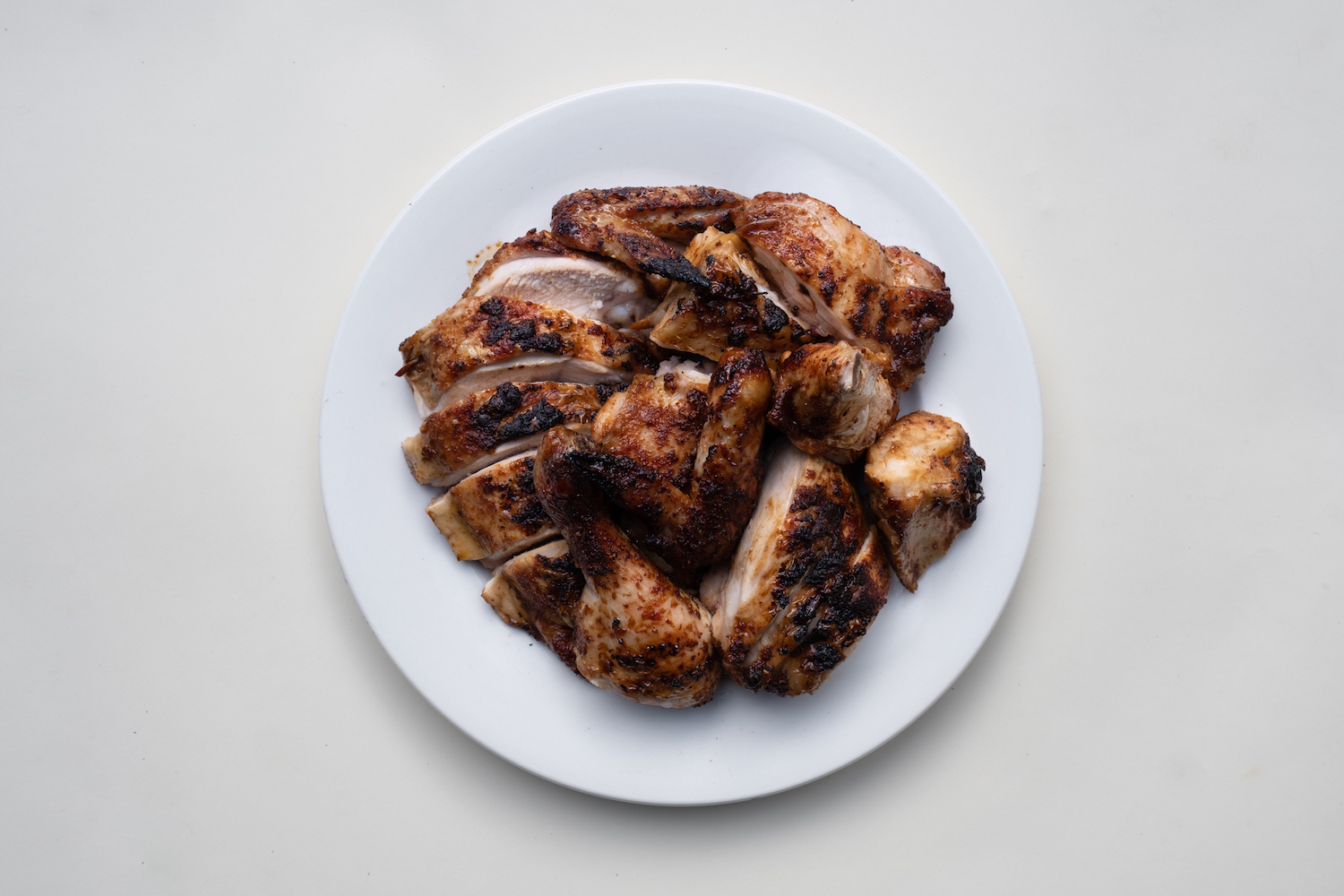 Charcoal chook is the main game here, and available to order in quarter, half and whole serves. The birds are butterflied, brined overnight for 12 hours and grilled in cages on a custom rotisserie. “We open them up so they cook quicker and it brings in more flavour,” says Liston.

While the spatchcocking method is a signature of Portuguese charcoal chicken, that’s where the influence ends. Joybird’s menu will draw on Asian – largely, Japanese – flavours. The chook comes with a choice of three types of seasoning – “J-spice”, soy and cardamom, and Balinese curry. The first is brined in salt and kombu then coated with a dry rub of seven “secret” spices and cooked until golden brown. It’s the perfect balance of crisp, scorched skin and impossibly juicy meat.

“The kicker”, says Liston, is the sake and yuzu juice he sprays on the bird while it’s cooking to keep it tender. “The sugar in the sake caramelises the outside of the chicken, which stops the juices coming out,” he explains. “It makes the colour go that crispy golden without losing the flavour. If you don’t spray or baste, in particular with that dry rub, you lose liquid.” 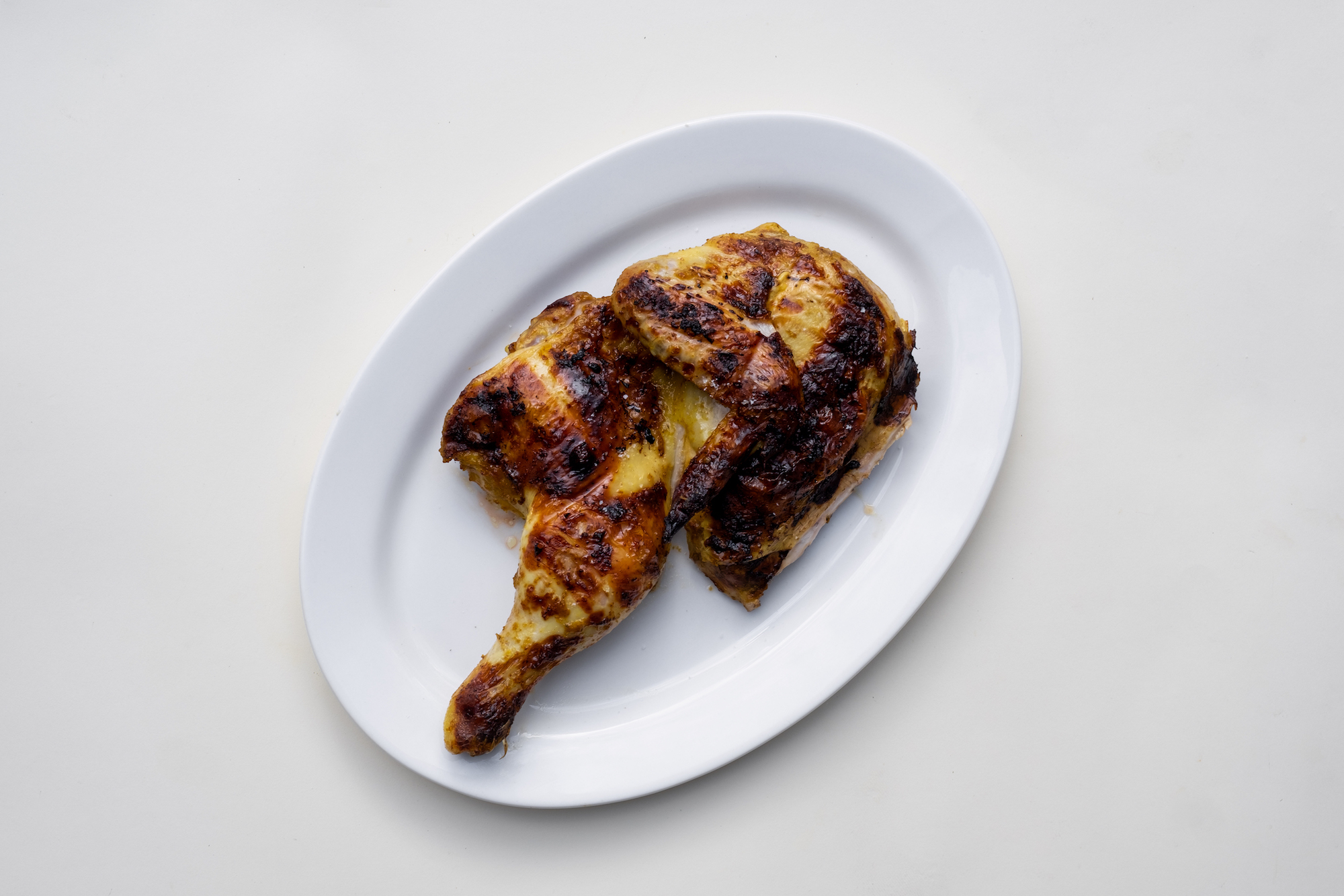 Liston is expecting this to be the big seller. “I really like this – and I hate curry,” he says, pointing to the Balinese curry chicken on the rotisserie. “[But this is] really zingy and fresh.” The bird is brined with coconut milk and buttermilk “to make the flesh really creamy”. Then it’s into the cage and brushed with a bright yellow marinade of ground turmeric, ginger, garlic, coconut milk and lemon while it’s cooking. 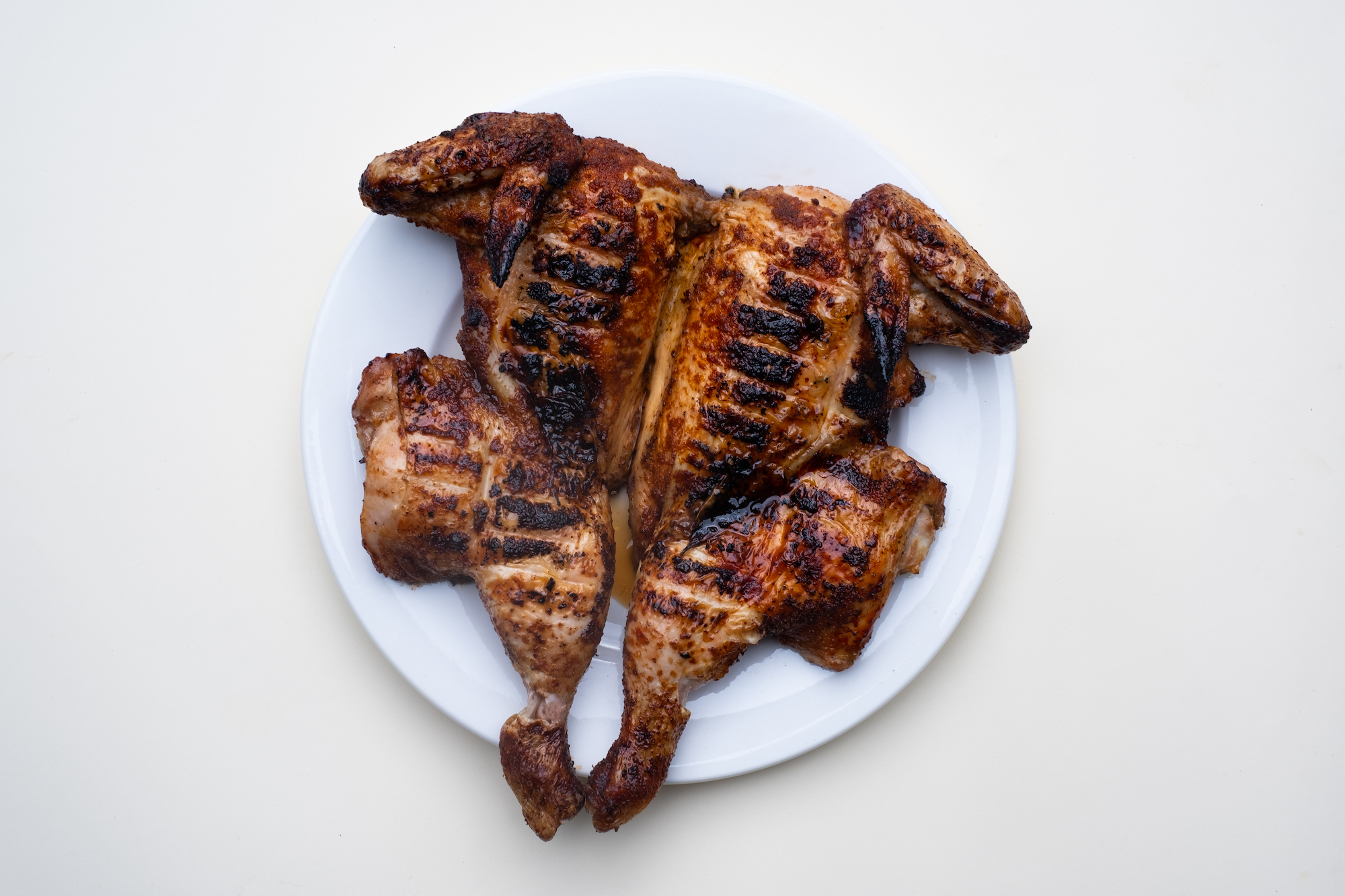 This beauty is brined with soy and honey, then brushed with a sticky wet marinade of more soy and honey and cardamom. “It’s very similar to the teriyaki chicken at Shobosho, except we’ve added a lot more honey and cardamom to the sauce,” says Liston. “And it tastes different because that method of cooking – when they’re split open like that – is completely different to cooking them whole. The flavour punches through it so much faster.” 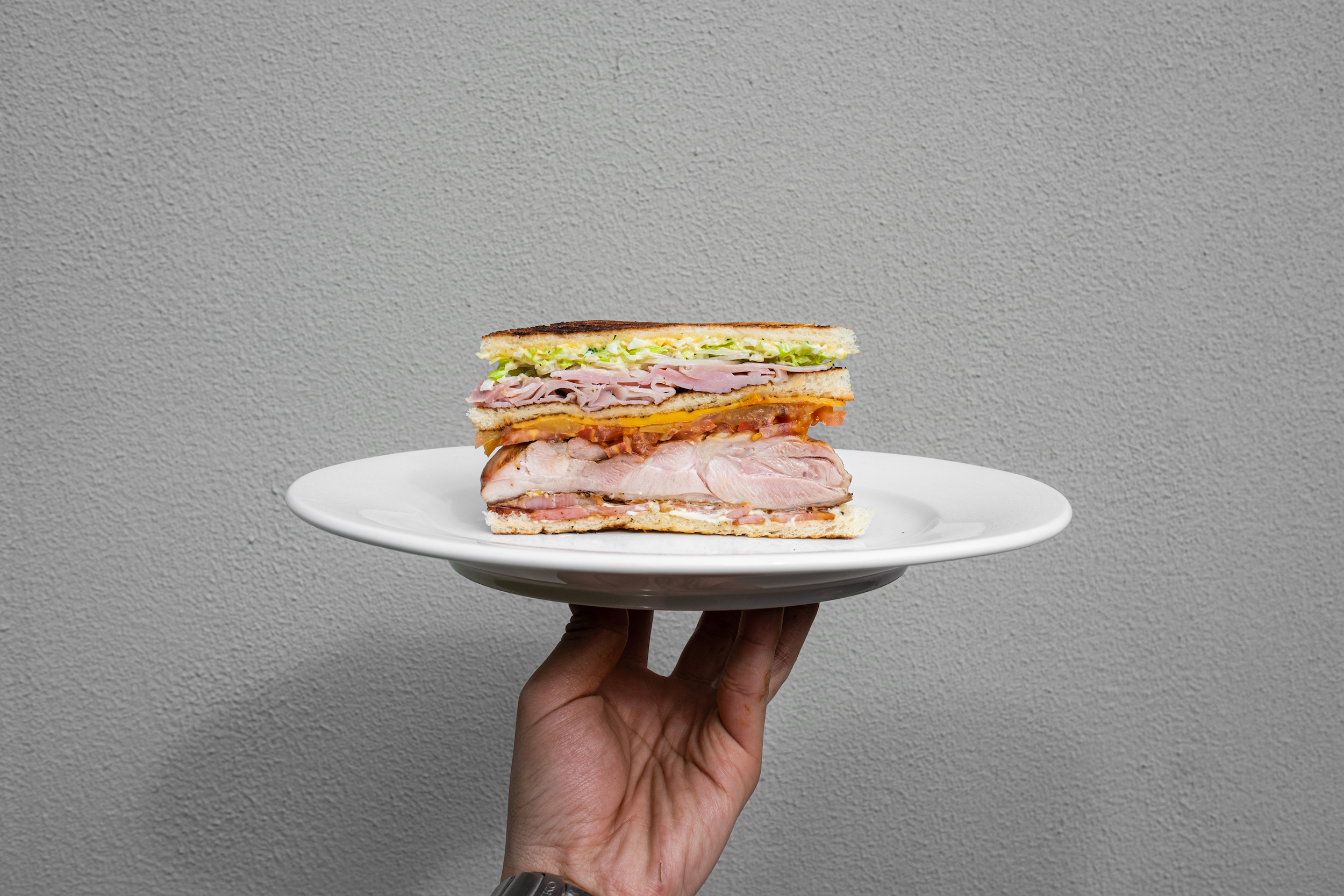 “This is the first thing you have in any hotel – well for me it is, anyway,” says Liston. I watch him assemble the multi-layered marvel like he’s laying down bricks and mortar. “It’s all about the glue,” he says, as he slathers on garlic butter between layers.

The hefty sandwich is made up of grilled chicken thigh (“Originally we fried the cutlet of chicken, which was good, but now it’s cleaner”), bacon, deli meats, cheese, tomato relish, lettuce, chopped boiled eggs with yuzu mayo (“our take on a classic gribiche”), tomatoes pickled in pear juice, and crustless white bread from Riviera Bakery. “It’s all good stuff though,” exclaims Liston as he catches my eyes widening.

Despite the hectic filling, the result is remarkably bright and fresh, with the crisp lettuce, the yuzu mayo and the acid of the pickled tomato balancing the heavier, fattier components. Share this bad boy between two and you’ll still have room to sample the rest of the menu. 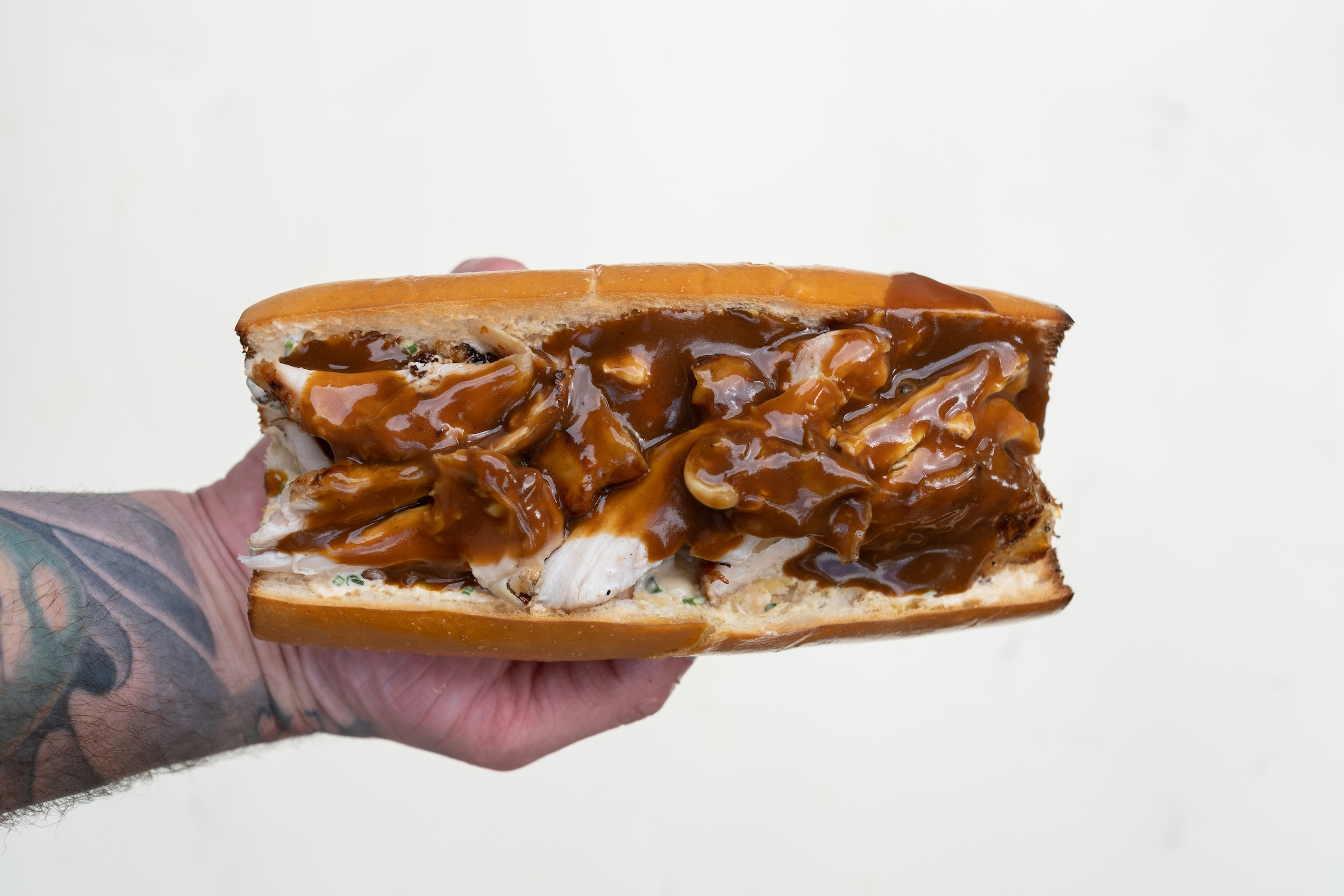 “This is like what you’d get from a service station when you were stoned as a kid,” says Liston. Joybird’s chicken gravy roll, true to his description, isn’t pretty. But this riff on the daggy Aussie classic comes tricked up with house-made gravy and a special ranch sauce with yuzu kosho (a Japanese condiment made with fermented yuzu peel and chilli).

“This is probably the best dressing we’ve made,” says Liston excitedly. Its subtle acidity slices through the fat of the chicken and gravy. It also appears on the katsu-chicken-meatball roll with mozzarella and that burning-hot house sriracha.

Joybird will open on King William Road in August. Keep an eye on Broadsheet for more updates.