It's flamboyant as they come, but this extravagant cabaret and cocktail bar welcomes all. 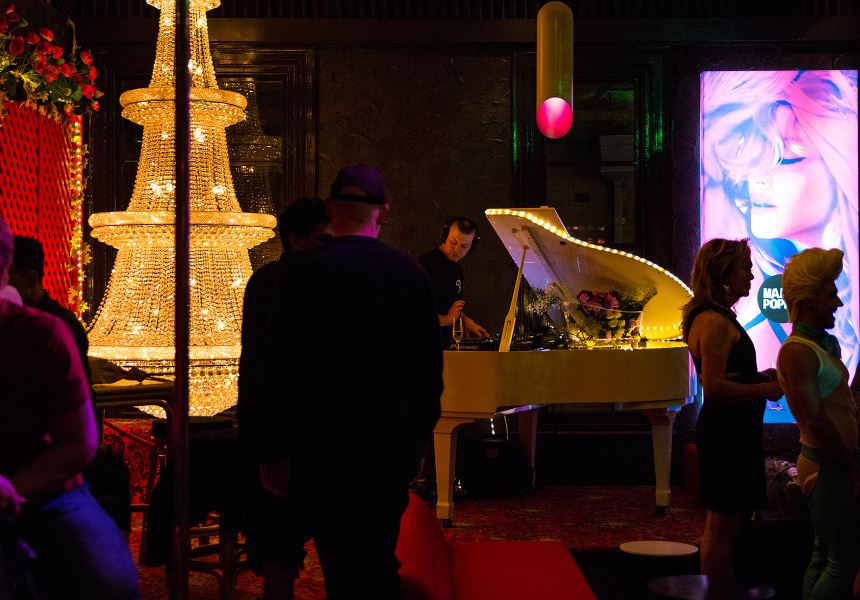 And what a moment. The low ceiling of the cabaret bar means the crystal chandelier dangles almost to the ground. It’s kept behind a velvet rope and it’s the first thing to catch your eye. That’s an impressive feat when the other things vying for your attention are hundreds of flowers; a disco ball; stripper pole; and a DJ booth housed within a white grand piano.

“There was only the Mars Bar for me as a gay man, so I thought I’d do something with a bit of a twist – focus on cocktails, free entry and shows,” Craddock says.

Which is not to say Mary’s Poppin is strictly a gay club. Craddock was keen to create a space that can be enjoyed by everyone, although a love of ’80s pop will help.

For the most part, it’s just a great cocktail bar. Highlights include the Schlong Island Iced Tea, a maraschino cherry twist on the classic; as well as the Don Dunstan (spiced rum, coconut cream, pineapple juice and more maraschino cherries).

The cabaret aspect is a bonus – performers come on for a single-song show and leave as quickly as they appeared. With the Adelaide Cabaret Festival looming in June, Mary’s Poppin will be in prime position to claim the Fringe Club’s role as after-party venue for performers and fans alike. No doubt a few spontaneous shows will take up some of the six nightly performance slots.

“We don’t know what they’re going to be, it’s just going to happen,” Craddock says. “It could be a comedian, a tap dancer, a hot boy in a banana … anything.”

Despite its compact size and semi-secret entrance (just look for the pink umbrella), Mary’s Poppin may be the anti-small bar. Here you’ll find no exposed brick, Nordic furniture or Edison bulbs.

The interior was designed by Michael Delany, who’s well known in Melbourne for creating the infamous Honkytonks, where Mick Jagger once partied. He describes Craddock’s vision as “semi-sophisticated, uber camp”.

The bathrooms are unisex and unapologetically pink. Each stall is named after a celebrity, with Lindsay, Britney, Caitlyn, Kim K and Madonna written in a star on the door.