Luna Opens on Pulteney Street, With House-Made Pastries and Waffles and Confit Duck by Day, and (Soon) Wine and Cocktails by Night

Marina Tazhdynova of CBD venues Bibliotheca, Red October and Suzie Wong has opened her first cafe and patisserie with friend and pastry chef Olga Baranova. And it’ll soon double as a wine bar, too. After eating breakfast at Luna, Pulteney Street’s new cafe, patisserie and (soon to be) wine bar, it takes a few moments to figure out where to pay. There’s no service counter as such; instead, there’s a long bench running down the middle of the room, with customers seated all around it.

When Broadsheet visited the venue ahead of its opening, co-owner Marina Tazhdynova said she wanted to capture a “homey” feeling. Stepping inside Luna on a busy weekday morning, it’s clear that she and co-owner Olga Baranova have achieved it. “You can just join the big communal table and feel like you have a big family and you’re having breakfast together,” says Baranova.

Tazhdynova is no stranger to opening a new venue. She’s behind CBD bars Bibliotheca Bar & Book Exchange and Suzie Wong, as well as the now-closed Red October. (Now Luna’s open, she’ll continue to operate Bibliotheca, but not Suzie Wong). Luna is her first daytime venue, and her first venture with friend and pastry chef Baranova.

The scent of Baranova’s freshly baked bread, danishes, madeleines, cookies and croissants fills the store at any given time of day. “If you come here early in the morning for coffee, you’ll smell everything baking,” says Baranova. “I also bake throughout the day, so there’s always something fresh from the oven.”

Mondays and Tuesdays are dedicated to coffee and pastries. The rest of the week, there’s a full breakfast and lunch menu by chef Alberto Cardozo e Silva, who previously shuffled pans at Red October. Come in the morning for cured salmon on sourdough; confit duck leg with a poached egg, figs, tomatoes, rocket and onion jam on waffles; shakshuka; and a breakfast brioche with bacon, a fried egg and house-made tomato chutney. For lunch, there are croissants, salads, brioche (with a variety of fillings), and baked truffle gnocchi.

Menu items may change slightly from week to week. “For example, you can get our confit duck on the brioche at the moment with figs, because they’re in season,” says Baranova. “Basically, it’s a bread-based menu. If you look at the breakfast, it will be sourdough based or brioche based. We also have freshly baked croissants every day, which you can have sweet or savoury – salmon and avocado is very popular.”

Luna’s night-time bar will open soon; until then there are wines and brunch cocktails such as Mimosas and Espresso Martinis. “I won’t really rush with the nights as of yet … we’ll see how the morning trade goes, so we can see that it’s all running smoothly, and then launch the wine bar,” says Tazhdynova.

The wine list, curated by the Uraidla Hotel’s Owen Colin, will include small producers such as The Mysterious Mr Black, The Other Right, and New Era Vineyards.

Non-alcoholics come both from friends and Tazhdynova’s other venues – including lemonade with tarragon or ginger (house-made at Bibliotheca) and kombucha (homemade by friend Luiz). “It depends on the week – sometimes the kombucha is mango, sometimes it’s strawberry,” say Baranova. “His starter is two years old, so it takes him three days, plus two days to infuse.”

As for Red October’s much-loved Russian dumplings? The people have been asking, so Luna will deliver. “We brought them back,” says Baranova with a laugh. While it’s not on the permanent menu right now, “it’s probably going to be a lunch special at some point”. 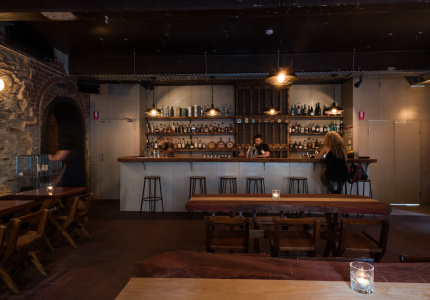