The city hole in the wall will close its window for the last time on July 2. But rest assured you can still get your barbeque fix at the original Port Adelaide eatery – and now at home thanks to a new range of bottled sauces and vac-sealed packs of smoked brisket. Fifteen months after opening on Leigh Street, Low & Slow is closing its CBD hole in the wall. The team announced the news in an Instagram post earlier this week.

“Although we have loved every moment of our time on Leigh Street, we will be wrapping it up in the coming weeks,” the post reads. “Since our food truck days, serving barbecue in the city was something we’ve always wanted [to] do … We’re so grateful for all of the new friends and relationships we’ve grown during our time on Leigh Street … We hope to see you in the next few weeks before we close for a final slice of the brisk.”

The tiny spin-off to the popular Port Adelaide eatery opened in March 2020 to service city workers – two weeks before the national shutdown. Speaking to Broadsheet today, co-owner and operator Kevin Stockmann says, “It’s been a bit of a time, starting when we did.”

“We had two weeks of normal operating and then we shut down … but we were all still unaware that it would impact us the way that it did. It’s been good, it’s been fun and we’ve had a good response, but … the city landscape has changed. People aren’t in the office on a permanent basis anymore.

“We’re coming up to our lease renewal so we assessed it and decided it was time to pivot the business into making the sauces and investing our time, money and energy into that as opposed to continue doing lunch time in the city at the moment.”

“We’ve got a little bit of time left on the lease before we close so we’re going to use that time to build up a strong stock of our barbeque sauce and Carolina mustard sauce, which will be for sale. I’m excited about it.”

The sauces will be sold in 550-mililitre bottles through the Port Adelaide restaurant, The Port Admiral Hotel and online, initially. Stockmann hopes to get the bottles into other eateries around town and eventually into supermarkets. And to really elevate your at-home experience, he’s also selling vacuum-sealed packs of Low & Slow’s rubbed and smoked beef brisket and pork hocks.

“We just got a new vac packer down at Port Adelaide, so that’s been a new toy for us to play with,” says Stockmann. “Doing the brisket like that works really well, it keeps it for a ridiculously long amount of time, and it means it’s really simple to reheat, or to use it however you want to use it. You can either reheat it in the bag in boiling water, pull it out, put it on a tray in oven for 10 minutes just to crisp up the outside and you can have sliced brisket like you would at the restaurant or here. Or you can just pull it cold out of the bag, chop it up and turn it into a taco mix or ragu.

“Someone the other day said they made a baked mac'n'cheese with it which sounds fucking amazing.”

Low & Slow Leigh Street will close on July 2. In the meantime, you can still get your hands on its sandwiches and trays of wood-grilled chicken, smoked brisket, pulled pork and more. 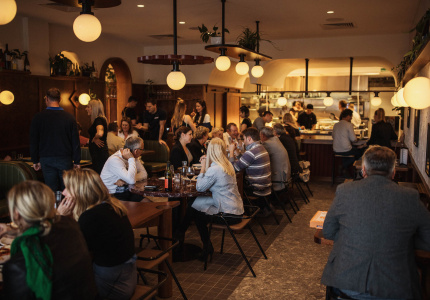