In this long-abandoned house of worship you'll find two of the best new-gen winemakers in the country. 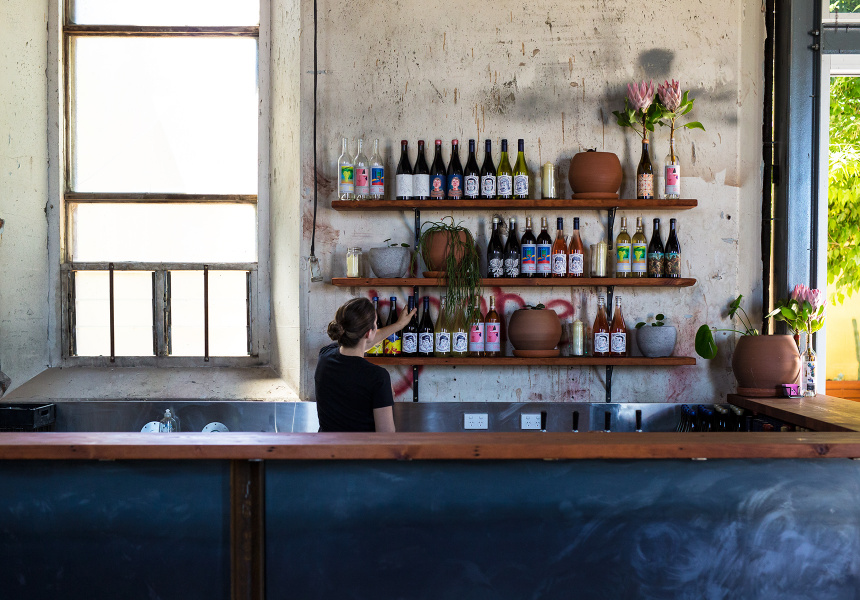 Adelaide has no shortage of cellar doors. But one just three kilometres from the city in the middle of a winery in a State Heritage-listed former church is a first. Add to that the formidable duo behind it – young gun winemakers Greg Grigoriou (Delinquente) and Steven Crawford (Frederick Stevenson, Giovanni Armani Giorgio) – and this is guaranteed to be something special.

Oddio (“oh God” in Italian) is a winery and tasting room for the pair’s wine labels, a bar and function space. The 100-person-capacity venue is located on the corner of Drayton and Sixth streets in the industrial suburb of Bowden, just down the road from Plant 4. It’s not your usual cellar door setting. There are no vineyards dotting the area, no rolling hills or lush valleys. Among the neighbours are a packaging factory (which, fittingly, manufactures wine boxes) and Conroy’s smallgoods. But it fit the brief for Grigoriou and Crawford, who both needed a bigger production facility but didn’t want to schlep out to the regions each day.

“Both Steve and I are based in the city. And the Riverland is a fair way away,” says Grigoriou, who grew up in the Riverland and sources his grapes from there. “I wouldn’t be able to do Delinquente from the Riverland. Being involved in the industry, in the scene, in Adelaide … is what really kicked [the label] off.

“I always thought an urban winery would be, not an end game, but a good target and a good fit for the brand. Having a winery in an old church in a former industrial area in inner-city Adelaide makes sense to us, but it wouldn’t make sense to most winemakers.”

After suggesting a move out of their shared city space to a bigger site, Grigoriou immediately looked to Bowden. A drive through the area revealed a long-vacant former Methodist church built in 1851. The sandstone church was extended in 1872, sold off in 1949 and left vacant since 1989. A group of new owners took it on in recent years. “The timing was right,” says Grigoriou.

He and Crawford were intent on keeping the dilapidated building largely as is – save for bringing it up to safety code. They were a landlord’s dream. “We basically said we don’t want to change too much,” says Grigoriou. “I think everyone else wanted to fix everything, whereas we were like, ‘Nah it’s fine. It’s rustic’.”

The first step was adding a disco ball. For real. “That was the first thing we put up,” says Grigoriou. Next came insulation for the barrel hall and knocking down part of the back wall to install floor-to-ceiling glass bi-fold doors. A lone church pew bought at auction nods to the building’s past.

Those glass doors now open out to a leafy courtyard featuring timber booths and sprawling bench seating that cleverly makes use of the space. It will soon be populated with rows of citrus trees – something of an homage to the Riverland – palm trees, ferns and cacti.

An outdoor kitchen with a woodfired oven is in the long-range plan. In the meantime, Grigoriou and Crawford’s chef friends from places such as Sunny's Pizza will provide the snacks.

Inside, the 395-square-metre warehouse is now a permanent base for Crawford’s winemaking. Grigoriou will produce his micro-batch Hell series here, but continue to make the majority of his wines at a larger winery in the Barossa.

A wine press, de-stemmer and fermentation tanks sit in wait. Come vintage time, pressing and fermenting will be in full swing. The floor will be covered in tubs full of fermenting grapes, says Grigoriou. “You’ll be able to see – and smell – them.”

An adjacent bar stocks a tight, rotating edit of the pair’s wine labels for public and private tastings. Their full ranges are available by the bottle – to take home or enjoy on-premises. They’ll also pour wines of friends and visiting producers. “We’ll be able to show other wines as comparison,” says Grigoriou. “We’re hoping to host events for guys who don’t have a cellar door. Or interstate [winemakers] to do tastings and stuff like that.”

But don’t expect a full-time wine bar. With little foot traffic in the area, Oddio will be a destination venue, says Grigoriou. “It’ll have a bar and we’ll do parties, but it’s not like we’re going to be open four nights a week. We’ll open when we want … and give people a reason to come out here.”

Oddio opens today from 5pm to 1am, with pizza by Sunny’s and sweets by The Lost Loaf. It’s also open Saturday 12pm to 1am and Sunday 12pm to 9pm.