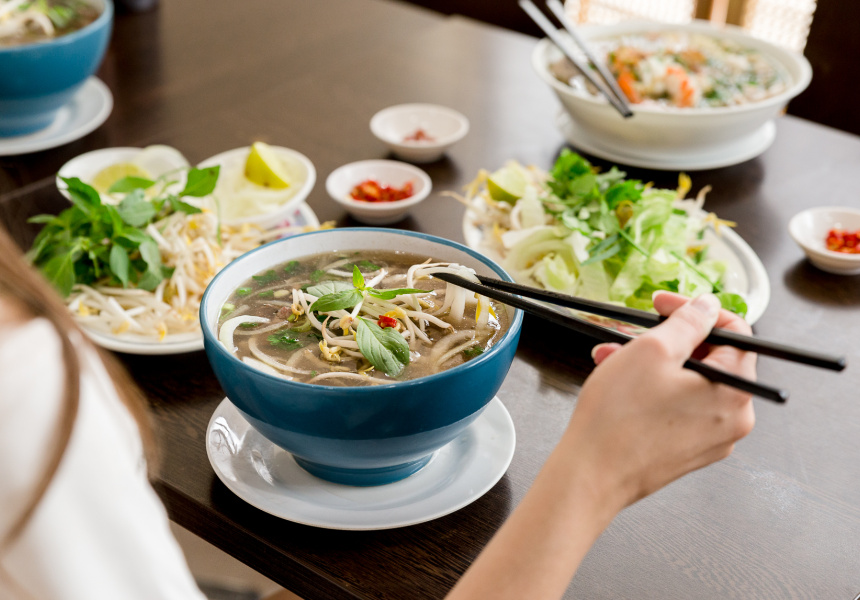 Almost everyone who pays a visit to Pho Hong Tam does so on the recommendation of a friend. Word of mouth is incredibly important to the restaurant. It’s tucked away on a quiet residential street in Athol Park, next to one of Adelaide’s oldest Asian groceries. And, going by the cars parked on the street at any given time, word is getting out.

It’s an impressive feat for a restaurant that sits close to, yet noticeably apart from, the Vietnamese food hubs of Hanson and Days Roads. You have to work hard to compete with the likes of Yen Linh and Nghi Ngan Quan (which both have second restaurants in the city), Hoang Gia Quan, Vietnam Restaurant and Pho Ba Ria 2.

More than 25 years after Kim Hong Thai and her husband Chi Dan Thai migrated to Australia from Vietnam, they opened Pho Hong Tam in Athol Park in 2016. It’s the second venue for the pair, who needed another space to cope with the lines pouring out the door at their original Rosewater location. “The other restaurant was quite small,” Kim Hong says. “So we expanded the menu when we moved to the Athol Park building.”

Behind the modest shop front is a bustling community joint; it’s regularly filled with families gathered around large circular tables; couples with small children; and groups of high-school students coming in for a bite after class. It’s vibrant, the service is quick, and the food is consistent. It’s not unusual for Chi Dan to work late into the night preparing broths for the next day, or for Kim Hong to travel between both restaurants to ensure everything is up to scratch.

You’ll find many Vietnamese staples on the menu, such as com dac biet (combination broken rice), bun bo xao (vermicelli noodles with lemongrass beef) and, of course, pho. There are almost 20 different types of it on the menu, ranging from the classic pho tai (rare beef) to pho ga (chicken) and pho duoi bo (oxtail). The Thais pride themselves on making a well-balanced broth, which is hearty with a hint of spice. Toppings include fresh chillies, beansprouts, Thai basil, pickled onion and – when in season – Vietnamese sawtooth herb. If you’d like to make adjustments to the broth, lemon wedges and a variety of sauces (hoisin, fish, Sriracha) are on hand.

There’s an extensive list of drinks and desserts on offer, too. One of the most popular is sinh to bo, an avocado milkshake blended with condensed milk. They also serve che ba mau (three-colour bean dessert); sinh to mit (jackfruit milkshake); and are one of the few restaurants in Adelaide serving soda hot ga: a rich, sweet drink with a custard-like texture, made from egg yolk, condensed milk and club soda.

With all that choice, your best bet is to start with pho tai – the most popular dish by far – and work your way through the rest of the menu. Some of the lesser-known dishes are real highlights, such as hu tieu nuoc (soup with rice noodles, chicken, pork, seafood and quail eggs) and bun mam (vermicelli noodle soup with fermented fish paste – it’s been coined “Vietnamese gumbo”). From time to time, you’ll be able take home one of the containers filled with thach rau cau (Vietnamese coffee, coconut and pandan jelly) that often sit on the front counter.

This article first appeared on Broadsheet on March 20, 2018. Menu items may have changed since publication.