A Lively Mediterranean Diner Is Moving Into the Charlick’s Space

Say goodbye to that very red interior and hello to big plates of lamb, charred flatbreads, ouzo shots and hip-hop at Yiasou George. 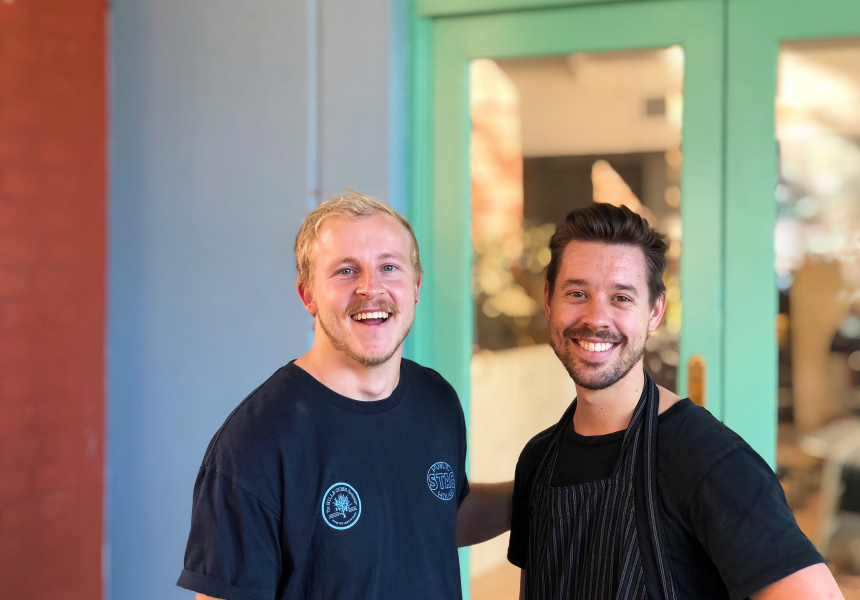 There’s movement inside the former Charlick’s site. The "casual fine dining" restaurant that opened in September last year quietly closed four weeks ago. Passersby might have noticed the once vivid-red interior has been given a lick of blue, green and white paint. But that’s just the start.

In three weeks the restaurant will become Yiasou George, a vibing Mediterranean diner serving charred meats and flatbreads cooked in the woodfire oven. “We want people to use their hands,” says restaurant manager Jack Booker. Think steamy, tear-apart pita with hunks of lamb shoulder, saganaki, dips, whole flounder and a pasta or two.

It’s the same team, led by co-owners Oliver Brown and Joshua Talbot, who also operate The Stag Public House next door. A nod to the site’s history remains. Where Charlick’s was named after William Charlick, who established the Adelaide Fruit and Produce Exchange on the same block in 1904, Yiasou George is named after George Taylor, the first licensee of The Stag.

“It was not really a snap decision,” says Brown of the new direction. “It sort of progressed and ended up changing further than what we were expecting.” The catalyst was the departure of head chef Blake Drinkwater, who moved on after festival season to cook in international kitchens.

Brown says Charlick’s “had been going fine” – the rebrand isn’t due to slow business. “Christmas time was fantastic, January was standard [with] a bit of a lull, but then Fringe time was really busy. It was nothing to do with the performance of it at all – it was just a shift in direction.”

There are more changes next door. Earlier this year Matt Eustis (ex-Stone’s Throw) took over The Stag kitchen from Justin Penman and will now work across both venues. Brown has also welcomed into the fold executive chef Nathan Sasi (ex-Nomad, Mercado), who now oversees Brown’s venues NOLA, Anchovy Bandit and The Stag. He and Eustis have designed the Yiasou George menu with inspiration from Eustis’s Greek heritage.

“Once they started playing with menus it was too far off the aesthetic feel of Charlick’s,” says Brown. “We thought, ‘If we’re gonna change it, let’s make it polar opposite. Let’s go in-your-face bright and fun – that’s where the white and blue came from.” They’re swapping the Australian red-dirt for the Greek Islands. “We want you to go in there and feel like you’ve been transported to somewhere like that,” says Brown.

Last year Brown brought designer Claire Kneebone on board to ensure a visual distinction between Charlick’s and The Stag, which was revamped by Sans-Arc Studio’s Matiya Marovich (who also worked on NOLA and Anchovy Bandit). He’s now kitting-out Yiasou George to help connect the neighboring venues. Crucially, there’s now a door between them.

“It was a bit of a challenge, the two [venues] were polar opposites … we tried to keep them separate but now we’re trying to promote the two being together,” says Brown. “We want people to grab a drink [in The Stag] then be walked to their table [at Yiasou George]. Or grab a bottle of wine and continue drinking it at dinner.”

“The connection will be much more encouraged between the two,” adds Booker.

“We’re gonna make it a bit of a party,” he continues. Expect loud hip-hop on the stereo, a disco ball above your head, and complimentary shots. “At 10 o’clock on Fridays and Saturdays we’re going to go walk a bottle of ouzo around and pour some shots,” says Booker.

The wine list will lean natural, with international drops from Spain, Italy and Greece. There’ll also be “kitschy” cocktails and Greek liqueurs such as Mastika. “It comes from the sap of a tree on this one island in Greece,” says Booker. “It’s super, super delicious, very similar to ouzo but a little bit lighter in terms of that really aniseed-y flavour – a little bit more approachable.”

“It’s a lot more us,” Brown says of the new era. “Lighthearted, relaxed, just good-quality stuff in a fun environment.”

Yiasou George will officially launch on May 15 and trade Wednesdays to Sundays for dinner. It will also open on Fridays for lunch.