After a visit from the police this week, the CBD restaurant can no longer sit patrons at the bar, rendering the business “completely non-viable”. It’s not alone, Part Time Lover, Clever Little Tailor and The Port Admiral Hotel are concerned, and calling on the government to wind back restrictions. 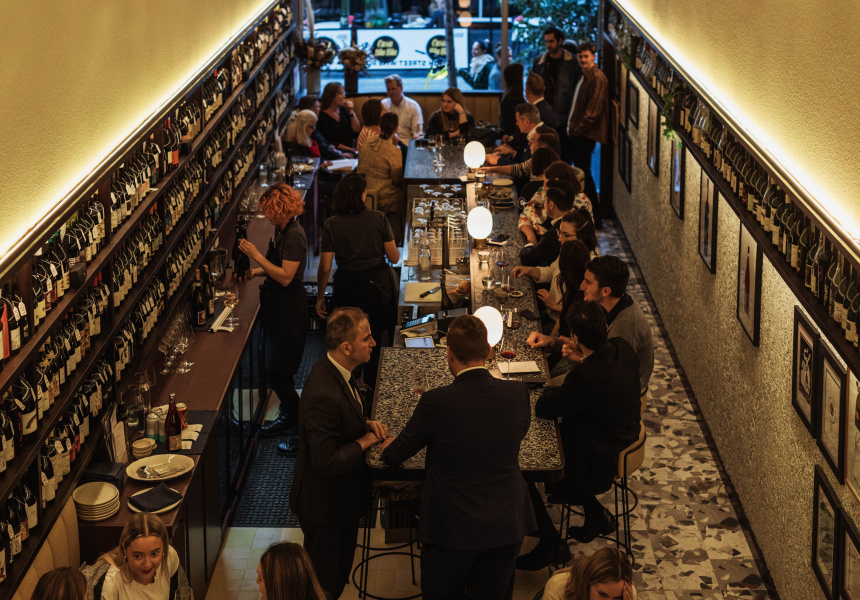 “Our first birthday is this Friday and we’re literally in a predicament where we could lose it all,” she told Broadsheet on Wednesday night. “It’s just crazy.”

Current restrictions dictate that customers must be seated at a table separate from any bar or area where orders are taken. Sasi says that losing the bar seats means that, under current density requirements, the venue can only sit eight people, which would render the business “completely non-viable”, Sasi says.

On Wednesday night, SA Police informed Sasi that she could no longer seat patrons at the bar, “Even though three police officers prior advised us it was a non-service bar and ok to operate from”, she wrote in an Instagram post.

“If we fail to comply, they’ll issue us with a $5000 fine and we will be prosecuted,” the post continues.

“This is beyond ridiculous. Our government can allow home gatherings of up to 50 [people] with zero social-distancing measures, and yet small venues and bars who operate safely with covid marshals and hygiene practises are deemed unsafe?”

“Do we go back to doing takeaway only, so at least we could keep Jake on board? But that means we’d have to let go of our nine other staff.

“Or [do] we hibernate? All we’re doing is putting ourselves into further debt.”

Sasi’s calling on Premier Steven Marshall to wind back the rule against bar seating. She says she understands the logic behind having all patrons seated, but thinks they should be able to sit at the bar. “Given the fact there are no cases [and] we have covid marshalls in place now, venues are the safest place to be. We take the details of every single person who walks through the door. I think it’s ludicrous to say we have to continue without bar service.

“The thing is, we don’t even make any drinks at the bar. If it’s a cocktail or wine pour we pour it at the back of the bar, so we’re two metres away from a customer.”

Of course, these rules don’t just affect Leigh Street Wine Room. Venues across Adelaide are feeling the pinch of reduced capacity, especially when bar seating is taken out of the equation.

Josh Baker says his venues Part Time Lover, Clever Little Tailor and The Port Admiral Hotel have all been seriously affected by the reinstated restrictions.

“Clever Little Tailor has been impacted really badly. We’ve had to spend $2000 on some fluted glass screening, so that’s been an expense," he tells Broadsheet. “The Port Admiral Hotel has lost at least 40 per cent of its dining capacity because it’s all at the bar.”

The looming changes to Jobkeeper will add a further strain to the industry and put businesses like his in a difficult situation. “We’re at a stage now where we’re turning over money – which is a good thing. But we’re not anywhere near [our previous] capacity. So now we’re probably not going to qualify for Jobkeeper again, and then we can’t have people back sitting at a bar, nor standing. And then our full rents are back. It’s really going to start hurting,” says Baker.

Like Sasi, he’s calling for a return to bar seating, as well as the ability to host non-seated private functions to make back lost revenue. “Especially coming into the festive season, there’re so many opportunities to have those private functions,” he says.

“Ideally it’d be nice to have people standing up and drinking again. But I understand that could be pushing the boundaries. So, the compromise is sitting at the bar. And private functions need to happen now. Particularly when you can have 50 people at your house without a covid marshall, with no strict planning in place. It’s absolutely absurd.”

The government reinstated seating restrictions in early August along with a temporary cap on numbers at private gatherings after an outbreak of new local cases.

It has since raised the maximum number of people at home gatherings to 50, and made it compulsory for venues to have a covid marshall responsible for ensuring social distancing.

There have been no new cases of Covid-19 in South Australia for 10 days, and there are currently no active cases in the state.