Spicy, Sichuan-style DIY hotpot for one has arrived in Adelaide’s north. 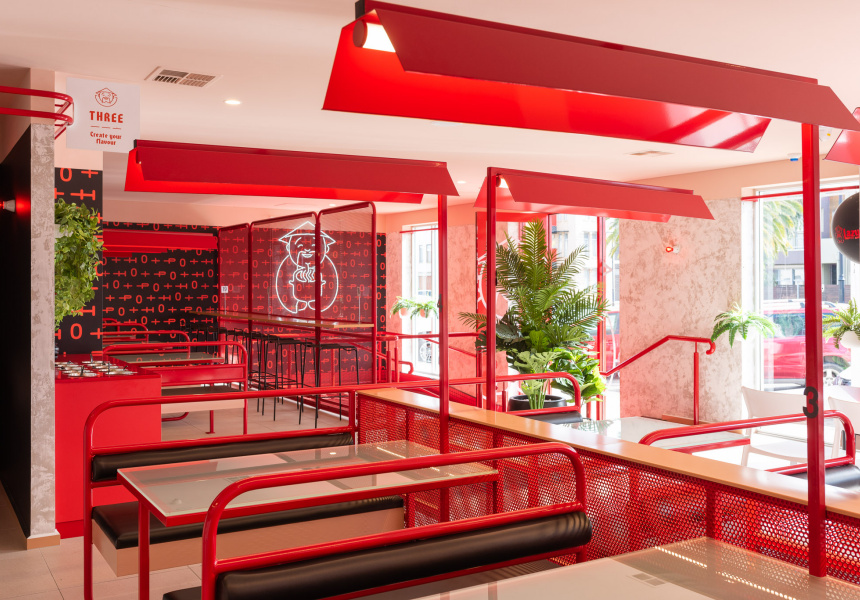 A quiet residential street in Mawson Lakes – away from the suburb’s main hub of shops and cafes – isn’t an obvious location for any restaurant, let alone a dedicated malatang joint. That makes the arrival of Lazyboy Hotpot, which opened last weekend on Victoria Parade, all the more exciting for residents in Adelaide’s north.

“You don’t really get much walking traffic – it’s more of a destination,” co-owner Andrew Nguyen tells Broadsheet. “That’s why we really wanted to market well and get the name out, and have a nice design.”

A white neon sign of a man holding a bowl of noodles is one of the first things you see upon entering the restaurant, which is fitted out with striking red and black interiors by Faculty Design. The large, airy space is packed with tables perfect for groups.

“We want people to recognise the space … so that it doesn’t matter where we are, or how far [away] we’re hidden,” Nguyen explains. So far it’s been working – in less than a week in the team has sold 1000 bowls of soup.

Malatang (which translates roughly to “spicy, numbing soup”) is a pick-and-mix hotpot for one that originated in Sichuan, in central China. It’s named after mala sauce, a key ingredient, which is heavy on Sichuan peppercorns and dried chillies. Lazyboy follows in the footsteps of Gathering Point, Chao Chow and 18th Street (all located in and around Chinatown), which all serve the dish.

The idea for Lazyboy came to Nguyen when he was on a trip to Sydney with his close friends (and now fellow co-owners) Son Tran and Dui Tran. “We met one of our mates there, who took us around Burwood. There was heaps of this style [of restaurant] everywhere,” he says. “We chose Mawson Lakes because there aren’t many options for food here … We decided to bring something from Chinatown for the north-siders.”

Signs around the restaurant explain the process of creating your meal. First, pick a bowl and pair of tongs; next, choose your meats, vegetables and noodles; mix in some condiments; then walk to the counter to weigh your ingredients (it’s $3.50 per 100 grams, with a minimum order of 400 grams). Finally, choose a broth and spice level (there’s a tom yum option if you want something more mild), then bid your ingredients adieu as they’re taken to the kitchen to be cooked. Less than 10 minutes later the bowl’s back on your table, steaming hot and ready for slurping.

Nguyen’s tip? “Always go for the mushrooms. We’ve got pearl oyster mushrooms that came in today,” he adds. “We’ve also got a lot of fish balls, but the ones that really stand out are the fish roe balls – you bite into it, and all this roe oozes out. We’ve got fish balls with cheese as well, which are really popular.”

There are a few different noodle options – udon, hokkien and instant among them – but Nguyen’s pick is the flat-rice noodles, the kind you’d typically find in pho. “We have that at home, so we really wanted it here. It’s different to [what you’d find in] the other [hotpot] places.” Mix in your choice of condiments – there’s chilli oil, sesame paste, oyster sauce and more – and you’re ready to go.

Asian grocery favourites are on-hand to cool down your palate. There are cans of Yeo’s (lychee, soya bean, sugar cane and wintermelon) and Mesona Grass Jelly, plus soft drinks, iced tea, soju and a few beers.