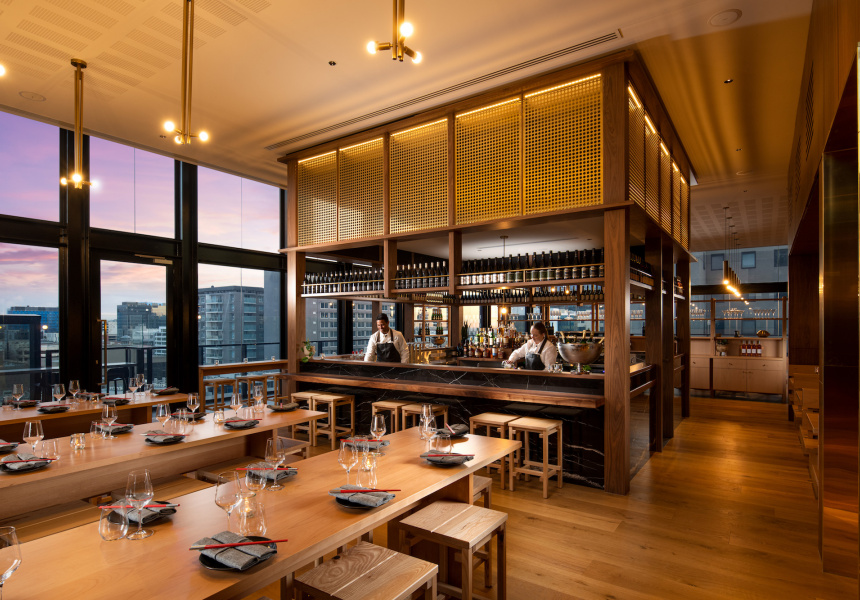 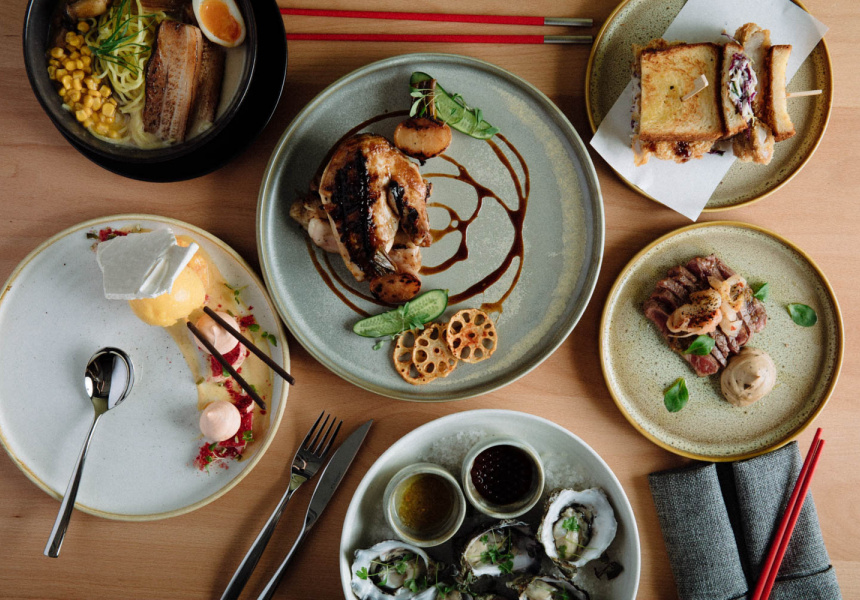 Before Koomo had even opened, its food and beverage manager Lucy Blanch was already receiving phone calls from future customers asking whether they can propose to their partners there. “That excites me,” says Blanch. “To be a part of something like that is just amazing.”

When Broadsheet visits ahead of its November 2 opening, it’s easy to see why the restaurant would be chosen for a milestone moment. With a name inspired by kumo (the Japanese word for “cloud”), the restaurant is situated on the 10th floor of the new Crowne Plaza hotel on Frome Street – now the tallest building in Adelaide. Sweeping views of the surrounding city and parklands can be glimpsed from both its indoor and outdoor dining areas.

“How can you not fall in love with this?” says Blanch. “It’s like when you go to the ocean and you look at the sea, and it calms you down. That’s what this view is like.” Inside, timber furniture, muted colours and soft lighting make for a relaxed atmosphere.

The menu doesn’t scream Japanese at first glance, save for a few stars of the cuisine: ramen, Wagyu, tempura. Head chef Patrick Chung is eager to lean into the fusion side of Japanese-fusion. “It’s not traditional,” he says. “There’s a bit of Korean, Japanese, Chinese.” Dishes include gyoza filled with pork and pine nuts; grilled broccoli with white miso, carrot kasundi (a Bengali relish) and crispy garlic; kingfish with pickled kohlrabi, avocado puree and wasabi oil; and braised pork belly with charred leeks, nori and a sweet-and-sour sauce.

Chung’s Fijian upbringing informs the food offerings. He eagerly speaks about the multicultural environment he was exposed to growing up – in particular Chinese, Indian, English and Japanese influences. “There’s a few Japanese restaurants [in Fiji]. Fijian food is very seafood-based; we love our seafood,” says Chung. “Japanese cuisine is also very seafood-based. And they love their meat – good Wagyu.”

Above all, the team at Koomo hope the restaurant feels accessible. It’s a hotel, after all, and people can still order food to their room. A chicken katsu sandwich seems like an obvious pick for a room-service order – as does the ramen, which also happens to be the most time-intensive dish to make. The broth takes about 10 hours to infuse.

“It’s a Sapporo-style ramen – a miso base [for the] broth, and pork stock,” says Chung. “A bowl of soup that you get on the table seems simple enough, but it really isn’t. There’s a lot more work to it than meets the eye. It’s a labour of love, you know?”

Championing South Australian producers is important to Chung, and he’s incorporated as much local produce on the menu as he can. Chickpeas are sourced from Dirty Inc; kingfish from Port Lincoln; oysters from Smoky Bay; prawns from the Spencer Gulf and vegetables from AMJ Produce.

Japanese whisky is the drink to go for. Koomo is on the House of Suntory’s allocation list – meaning it has access to bottles that are difficult to find elsewhere in the state, including Hibiki’s 17-year-old blended whisky. “Only five bottles in South Australia are allowed to be allocated, so we are lucky enough to have one of those,” says Blanch. “We’ve also got the Yamazaki and everything like that … our [House of Suntory] rep said, ‘I don’t even know if we’re going to get any more next year, Lucy.’ That’s how rare it is.”

Otherwise, there’s an extensive range of wines from across Australia and the globe (“I want to shower people with choice,” says Blanch), including rosé from Provence, pinot noir from Tasmania and riesling from the Clare Valley.