Restaurant, boulangerie and exhibition space Cliché is no more. In its place is a bold Japanese diner serving soft-shell crab sandos, pork jaw yakitori and a strong line-up of sakes. Number 26 O’Connell Street appears and behaves much like a restaurant, but its operators call it a “gallery” (to be precise, The Wonderful Winkler Gallery). It’s not a tax or licensing dodge – as far as we’re aware – rather a unique unshackling that allows the space to flex and reinvent itself at will.

The venue’s debut “exhibition”, Cliché, displayed an assortment of custom-made artworks by Adelaide artists around the theme of clichés (a moustachioed waiter carrying croissants, a French bulldog in a beret – you get the idea) accompanied by a predominantly French menu. In 2017 a boulangerie was added, under the command of French expat and pâtissier Clement Labaere (who now operates Maison Clement).

But you wouldn’t know it. After a further 12 months of rolling renovations, the space relaunched this week with a new exhibition: Kosho.

“We let Jae pretty much takeover the whole menu, with a little bit of a European touch here and there,” says co-owner and restaurant manager Nathan Nababan. Those touches come courtesy of Fabien Streit (a fixture of the cliché phase), who maintains leadership of the kitchen’s daily operations. “In a lot of ways he [Streit] is enjoying having a bit of weight off his shoulders,” adds Nababan.

“We felt that the French exhibition was starting to lose interest [within the community],” Nababan says. Even with a new bakery and a national award for Best European Restaurant at last year’s Restaurant and Catering Awards, the model had begun to feel dated, he says. “We wanted to bring in some new inspiration for the kitchen [staff].” Hyun-Park’s influence was immediate, skewing the menu in a distinctly Asian direction. He and the team eventually made the call to throw themselves fully behind Hyun-Park’s vision – and a brand new identity.

Kosho’s sharable menu consists of fresh dishes such as soft-shell crab sandwiched between slices of fluffy, crustless white bread with a wasabi and fuji apple slaw. Miso-marinated barramundi is served beside umeboshi (pickled Japanese apricot) mousse and beetroot, and Streit and Hyun-Pak have collaborated on the takoyaki arancini – a hybrid octopus and rice ball that combines iconic Japanese and Italian techniques. And the pork jaw yakitori with crackling and yuzu gel has the classic salty-meaty-sweet combination of Hawaiian pizza. “The idea is to put a little fun into Japanese cuisine,” says Nababan.

A slimmed-down wine and beer list allows room for a strong line-up of sakes, which are mixed in the cocktails. “The cocktails are all Japanese-style, using dry sake, cloudy sake and umeshu,” Nababan says. For those off the heavy stuff, there’s a mocktails selection built around Asian flavours such as cherry blossom and yuzu.

Paired with the shift in culinary direction is a striking visual takeover by local artist Lucy Bonnin. Sprawling gold and black murals – influenced by Japanese wave illustrations – cover much of the venue. In contrast, a standalone, single-panel work called Mother Nature provides a focal point for the front dining room. The vibe is more restaurant-appropriate and less eye-catching than Cliché’s motley collection, positioning Kosho as more eatery than gallery.

The Wonderful Winkler Gallery is one of a handful of venues tied to Walter Ventura to have recently undergone a makeover. We’ve seen a revamped British India pop-up in Plympton and Beach Bum relocate to Brighton, allowing L’Italy to open in its place. Whether prompted by restlessness or innovation, the group appears committed to keeping up with audience demands – and keeping its venues at the precipice of contemporary trends. 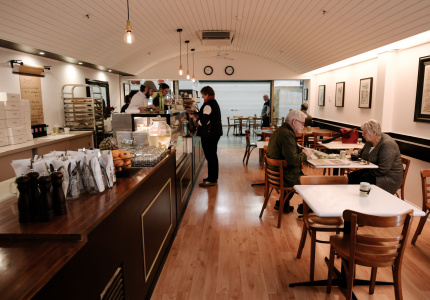