With a “meandering” multi-course set menu, a focus on KI wines and chef takeovers. And for the first time, it will be open for dinner. 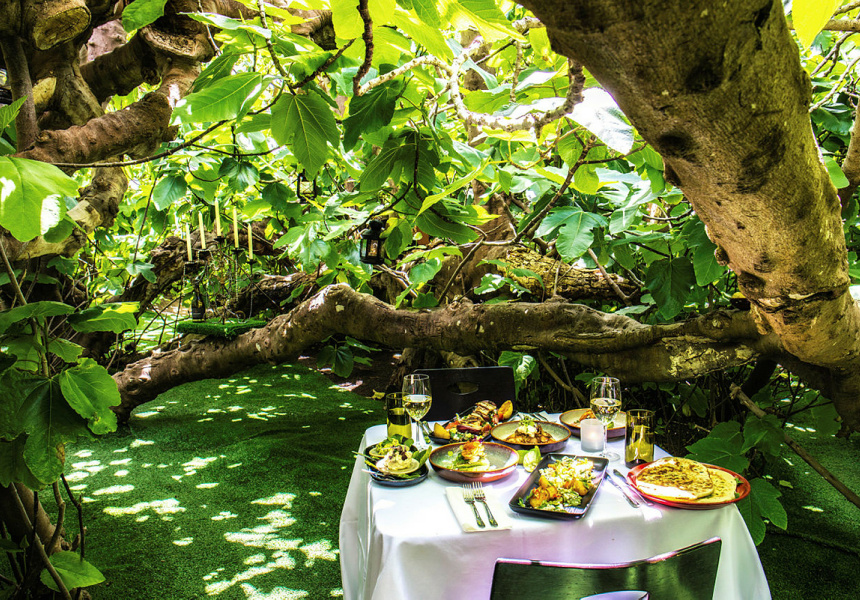 Just metres from the surf on Kangaroo Island’s north coast, the Enchanted Fig Tree offers one of Australia’s most memorable dining experiences. In the warmer months, the gnarled boughs of a 150-year-old fig tree are covered by a canopy of leaves that turns the ancient plant into a maze of intimate “rooms”.

After fire damaged the kitchen in 2018 and intense blazes came right up to the tree during the 2020 bushfires, the venue is reopening for the first time in two years this December – with a slightly modified offering.

Chef Nathan Parker (Lochiel House in NSW) will be in charge of the kitchen with a remit to foreground local produce, but that’s just the starting point. “Regionality and local produce are a given now, there’s nothing unique about that,” says founder Nick Hannaford. “We also want menus that connect to the history of Kangaroo Island so there’ll be an element of storytelling.”

The experience will begin in the on-site shearing shed with a cocktail by the Kangaroo Island Spirits team, before moving inside the tree for a “meandering multi-course” menu that will change regularly and feature local ingredients “that haven’t been seen before”. There will also be a series of takeovers with Adelaide chefs Simon Bryant, Duncan Welgemoed and Emma McCaskill (dates TBA).

The drinks list will be curated by Tasting Australia beverage director Nick Stock, who’s tasted every wine from the region in preparation. “I’m interested in changing the perception of KI wine,” says Hannaford. “We want to demonstrate that it can challenge other South Australian regions in terms of quality.”

With only 45 seats scattered throughout the living venue and no way to expand, the Enchanted Fig Tree will open to the public for dinner for the first time during January and February. And for those who don’t want to tackle the island’s roads after dark, Sealink will offer transfers between the restaurant and accomodation in Penneshaw, American River, Kingscote and Parndana

The Enchanted Fig Tree will be open from December 11 to the end of April.