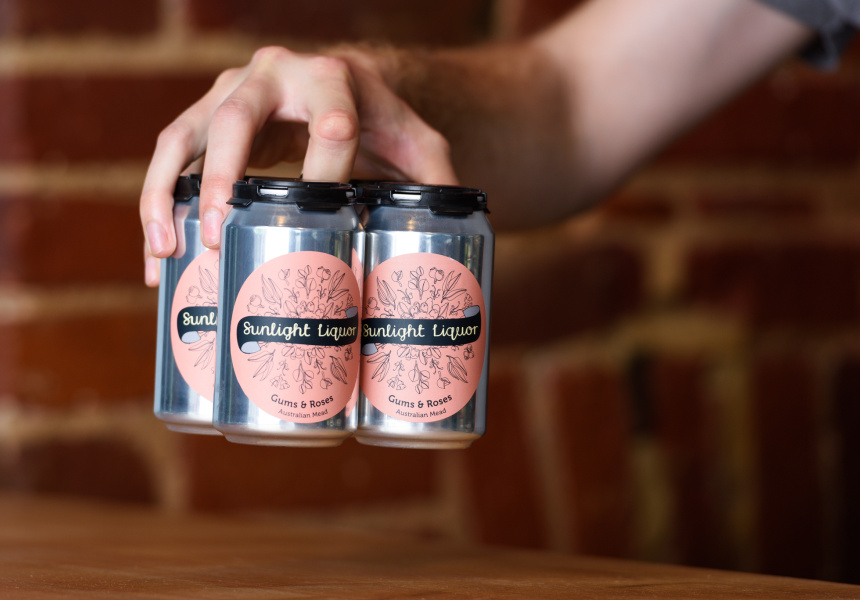 Eddy Collett and Tom O’Reilly struck up a friendship while studying environmental science in Canberra. Years later, they bumped into each other at a mutual friend’s wedding.

O’Reilly was brewing at Stone & Wood in Byron Bay, trialling a honey-based, kombucha-style side project. Meanwhile, in South Australia, Collett was navigating the beekeeping industry, searching for a way to propel honey-production beyond a farmers’-market stall. “I’d heard of booze being made from honey – mead,” says Collett, “But [the] conventional stuff isn’t my thing.”

Traditionally speaking, mead is a still, syrupy, liqueur-strength product that often comes in a port-like bottle.

Collett and O’Reilly joined forces in Adelaide to launch Sunlight Liquor in June 2016 and are challenging the drink’s ancient roots. Their low-alcohol, sparkling interpretation comes – quite boldly – in a can.

“The sparkling element is probably the biggest differentiation for us … it evolved from kombucha,” Collett says. “We shudder to say this but the best way to communicate it to punters is that it’s like honey cider.”

After a few small pilot batches they got serious in February with a 2000-litre batch of “modern mead” made with orange-blossom honey from Renmark. “Native honeys are not consistently available,” Collett says. Orange trees flower every year: “It enabled us to a do a product we can replicate.”

Production is at Barossa Valley Brewing, where O’Reilly’s day job is head brewer. He steeps botanicals in hot water, adds honey, and leaves it to ferment in a temperature-controlled tank. Primary fermentation is seven days, “in line with craft-beer production – very quick, very clean,” says Collett. It ensures a true reflection of the honey’s flavour.

Traditional mead requires such a high volume of honey that large-scale producers are dictated to by price. “Doing a lower-alcohol product … we can use more unique, premium, expensive or small-batch honeys,” says Collett.

Each honey varietal captures (albeit subtly) the floral landscape of the region from which it’s harvested. Terroir – or sense of place – is most often associated with winemaking. “If anything I think we capture it even more than [winemakers],” says Collett.

All of Sunlight’s raw, unpasteurised honey comes from a beekeeping couple that has worked on the Collett family’s Victor Harbour property for three generations. Their roving mobile hives provide access to varietals from across the state.

A “gimmicky, spice-rack sachet” of strawberry-gum powder got the ball rolling. After a few experiments (ignoring its suggested use in a strawberry-cheesecake recipe) Collett ordered a kilogram online. “This huge zip-lock bag of gum leaves arrived in the post,” he says, laughing. “I thought, ‘Oh shit, I just spent 130 bucks on leaves’.”

The strawberry-gum leaf’s essential oil is also getting attention from gin-makers. “It’s a native ingredient that actually adds something amazing rather than just trading on the novelty of ‘native’,” says Collett.

For Gums & Roses, it’s added to a mix of Flinders Ranges grey box and peppermint gum honey. Hibiscus gives it a rosé colour (“to be right on-trend”). “It messes with your flavour perception,” Collett says. “You get something that’s pink and tastes like tropical fruit, you think fruit, but it’s actually flowers and leaves and honey.”

It’s a stepping-stone for craft-beer drinkers. “No one’s heard of sparkling, sessionable mead,” Collett says. “If you compare it to a beer style and match the flavour profile, it’s great way to bring a lot more people on board.”

This article was updated on December 5, 2017