Flame-licked meats on sticks plus ramen and dumplings cooked and served by your very own chef. 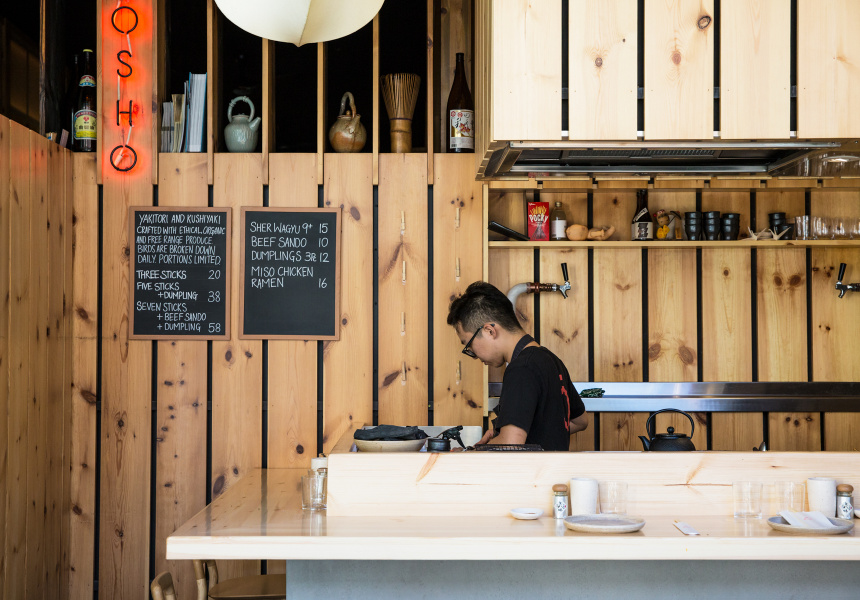 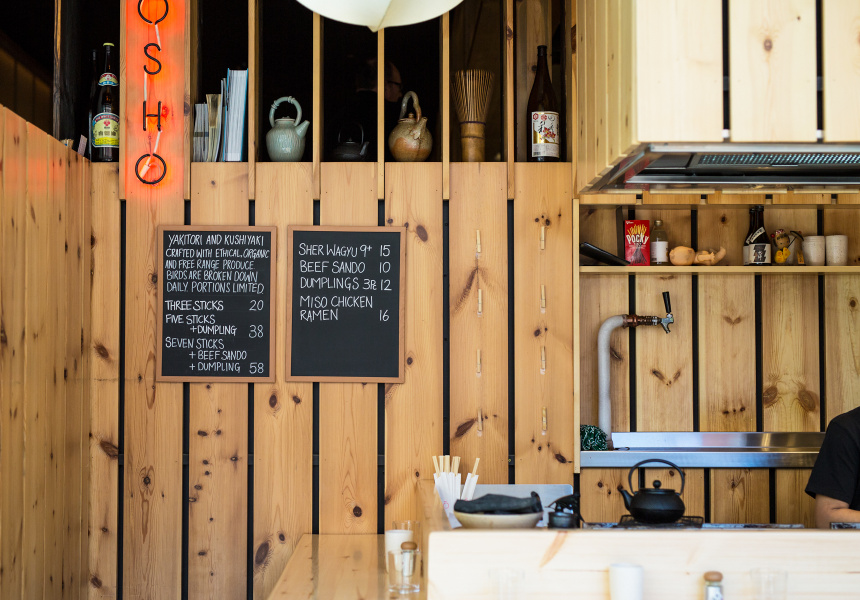 As Broadsheet settles into Adelaide’s newest and smallest yakitoriya on a bitterly cold night, the snug eight-seater on Shobosho’s ground level is already toasty from the glowing coals and whirling orange flames at arms-length.

This is Sho, a dream of Liston’s finally realised. When Shobosho opened last year he had plans for a similar sort of dining experience – a private room with its own yakiniku grill – in the cellar. Instead it became a prep area for house-made noodles and dumplings. But the Sho vision – a more intimate yakitori experience – remained.

“If we’d put it downstairs no one would have known about it,” says Liston. He decided to move it to the restaurant’s Leigh Street frontage, in full view of passersby. “At street level it’s in everyone’s face.”

A rapid reno with original designers Studio –Gram turned the previously neglected ground-level booths into a pint-sized yakitoriya, bringing the theatricality of the Shobosho kitchen front and centre.

The menu includes kushiyaki (“anything other than chicken on sticks”) but yakitori is the main game. And Liston is committed to honoring all parts of the bird (pasture-raised organic chooks from Nomad Farms in the Fleurieu). The neck-to-tail dining includes cuts of offal such as liver and heart; the bones are used in the ramen broth. “If you’re going to die for us, we’re going to make sure we use everything,” Liston says emphatically.

The bird is dried for a couple days before it lands on the grill. “By dehydrating the chicken, same as [dry-aged] beef, you take moisture out of it, which intensifies the flavour,” he explains. “It also makes it crispy on the outside.” Moisture is then re-introduced at the cooking stage. Liston stands guard armed with a spray bottle of sake and kombu (kelp) stock.

“You get this dry sake flavour with that sweet seaweed flavour,” he says. “[It] keeps it moist … which is really important with things like breast. In Japan you would counteract that by serving it medium-rare … But we also know that’s something Australians aren’t going to be 100 per cent down with.”

Once the chicken has “sealed” on the grill it’s dipped into a sweet and salty tare glaze of soy sauce, sake, mirin and kombu stock. Liston has been using the master stock for more than a year. “The chicken gets dipped in it every time, which has an impact on the sauce and changes the flavour,” he says. “That’s the backbone of what we do in terms of seasoning.”

When ready it’s plated and passed over by the chef, who will also pour your drinks. The intimate and interactive dinner is sort of like being at your mate’s barbeque, albeit elevated. It’s modelled on the yakitori bars that populate the streets of Japan.

It’s a “totally flexible” dining experience, says Liston. Pull up a stool for a quick bite or settle in for the evening. But make no mistake – this is food to drink with. Pair your meal with sake, Asahi or Suntory whisky highballs, which are all on tap. Shobosho’s full drinks list – with wine service – is also available.

“As the chef I can read whether a person is just coming in to eat some chicken and have some beers and hang out with their girlfriend or boyfriend – and that’s cool. Then there are people who want to know what we’re doing. And that’s the good thing about the whole concept. I can translate to you that yakitori can be simple but it can also be very layered.”