Hainanese chicken rice – with complimentary prawn crackers while you wait. 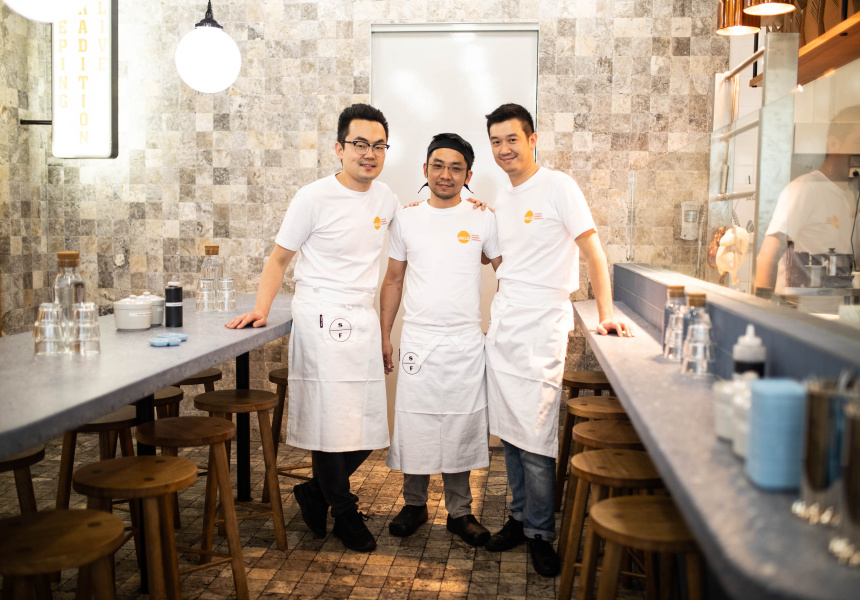 At a glance, not much has changed at Smallfry Seafood. Sans-Arc Studio’s fit-out remains virtually as is and the name’s still plastered on the shopfront (“We’re reluctant to take it down because we want to keep hold of the memory,” says co-owner Jack Lim).

But a few new light boxes that read “keeping tradition alive” signal change at the Waymouth Street diner. Its new iteration, Uncle, pays homage to Lim’s late uncle, who was a popular hawker in Penang. His specialty? Hainanese chicken rice. You can guess what’s on the menu.

Whole chickens, currently sourced from the Central Market, are cooked to Lim’s uncle’s specifications by newly appointed Malaysian head chef Tee Ng (who has ancestors from the Chinese province of Hainan, where this dish originated).

“You’ve got to cook the chicken whole – that’s how you preserve the flavours,” says Lim. “If you just cook the leg or breast by itself the flavour wouldn’t be there.”

The “traditional” is slow poached for 90 minutes in a 76-degree broth; the “crispy skin” is marinated and lightly deep-fried at 170 degrees. Both will hang from a rack in the kitchen.

Each serving comes with chicken on a bed of bean sprouts next to fragrant rice and chicken broth. It’s served on baby-blue plateware from Malaysia “just like what they use in hawker stalls”, Lim says. Or you can take away.

“When we started Smallfry we needed at least 15 minutes to get a meal out,” Lim says. He predicts “three or four minutes, on average” for chicken rice. That’s a win for your lunch hour.

Coconut juice and an iced lychee drink have been added to the drinks list. Smallfry’s three Asahi taps remain.