Eaterie, a French Patisserie and Gallery, Opens on Hutt Street

Run by two former architects, one now an artist, the other a pastry chef, it’s serving up fresh crêpes, galettes and a Breton sweet that's been called “a near-perfect pastry experience”. 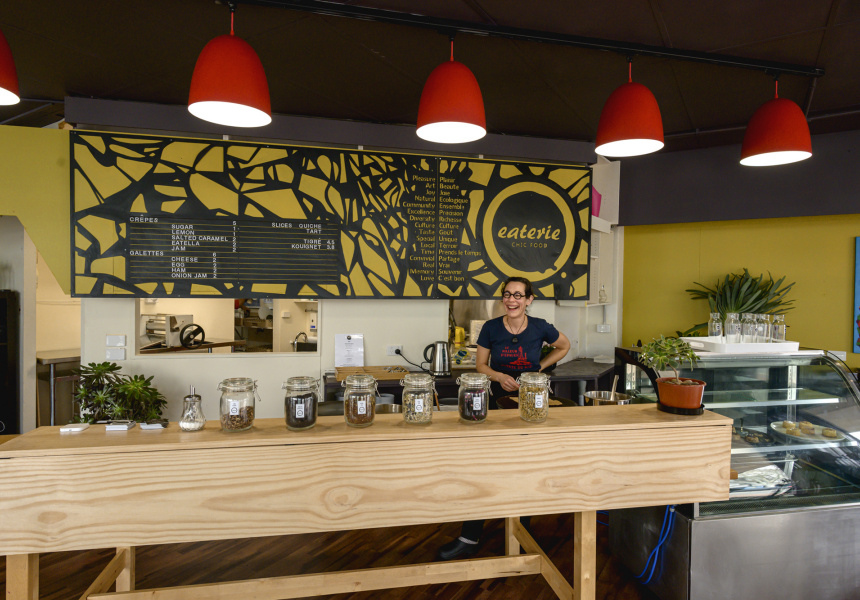 When Stéphanie and Hugues Vilette visited Australia 15 years ago, they didn’t expect to find a viable home for a business. “We were both living and working in Paris. We came in a cargo ship with no visas, no jobs, knowing no one, as an adventure,” Stéphanie tells Broadsheet.

They quickly fell in love with the country and established themselves in the community on the Fleurieu Peninsula. After their three children arrived, the Vilettes returned to France to be near family.

After four years back home, they’ve returned to Adelaide to open Eaterie, a Breton patisserie on Hutt Street serving crepes, galettes and specialty pastries made with local, seasonal ingredients. The pair landed a six-month lease with Renew Adelaide, following a three-week stint as producer in residence at the Adelaide Central Market earlier this year.

For Stéphanie, a sense of place is at the heart of Eaterie. “We really want to give a sense of [Fleurieu] terroir here,” she says. Instead of having fixed recipes, she allows the natural change of seasons to determine what’s on the menu.

When Broadsheet visits, Stéphanie is busily chopping leeks, red capsicum and mushrooms to fry up for tomorrow’s quiche. A bunch of fresh rhubarb is on the bench, ready to be cooked into pastries, and a bag of lemons from next door will become a tarte au citron.

Everything is made in-house, including a delectable homemade Nutella dubbed “Eatella”. But don’t bother asking for the recipe. “I won’t tell you,” says Stéphanie with a grin.

Produce is sourced from Fleurieu biodynamic farm Village Greens, plus fruits from McCarthy’s Orchard in McLaren Flat. Beans and brews are from local Kappy’s Tea & Coffee, served with Fleurieu milk.

Stéphanie holds patisserie qualifications, including a master of crepe from her native Brittany, a region in northwest France. It’s the home of Breton delicacies such as galette (the savoury buckwheat-based crepe counterpart) and kouign amman, a wheel of sugary, buttery bread dough that is slow-cooked to be crispy on the outside and caramelised on the inside. The relatively obscure creation was profiled by Eater in 2016 and touted as “a near-perfect pastry experience”.

But it wasn’t always fresh pastries and coffee – both Stéphanie and husband Hugues had successful careers as architects before opening the patisserie.

“Architecture became very abstract work,” says Stéphanie. “I used to be a model maker, so it was really hands on. But with a computer and 3D [software] … that’s where I felt very disconnected.”

Cooking was a visceral source of creativity, and having grown up in a family of produce growers, Stéphanie felt a strong connection to the land. Her architecture skills have translated into a shop that’s intricately designed, with striking symmetry and meticulously arranged patterns.

It doubles as a gallery to display Hugues’s artwork, a collection of abstract paintings reminiscent of 20th-century cubism. “What I’m intending with my painting is to bring people to have a different relationship with themselves,” says Hugues.

This philosophy is also at the heart of Eaterie, the connections between memory and emotion evoked by art and food alike. “When you eat something you really love, it’s really complex, emotionally,” says Hugues. “The ingredients, or the way it’s cooked, can open a window of remembrance.”

With the rise of food allergies and diet restrictions, Eaterie is committed to providing options for everybody, including vegan crepes and gluten-free pastries. “We would like that to be an opportunity for our business to bring people back around the same table,” she says. “The taste, and sharing, is what’s most important for us.”

Stéphanie hopes that sense of sharing is extended to the wider Hutt Street community, which includes a population of vulnerable and homeless people who often visit the Hutt St Centre nearby. “I’ve done lots of voluntary work using cooking as a social link,” she says. Stéphanie set up cooking classes with homelessness advocacy group Common Ground, and in the future she intends to use the space at Eaterie for workshops and engagement to support vulnerable community members.

She hopes the workforce of the future is people-centred, with a focus on unique skills that can accompany diverse abilities, inspired by her six-year-old daughter who has Down syndrome.

“[We are interested in] creating spaces for people like her,” Stéphanie says. “Rather than creating a job description, it is [about] understanding what people can bring, and adjusting the work. That’s called co-creating the job.”

The space, previously Latte on Hutt, had been empty for two years. An extensive fit-out with a complete kitchen remodel and upgrades to electricity and plumbing was supported by Renew Adelaide to help reinvigorate the street.