A French Patisserie and Cafe Opens in the Central Market 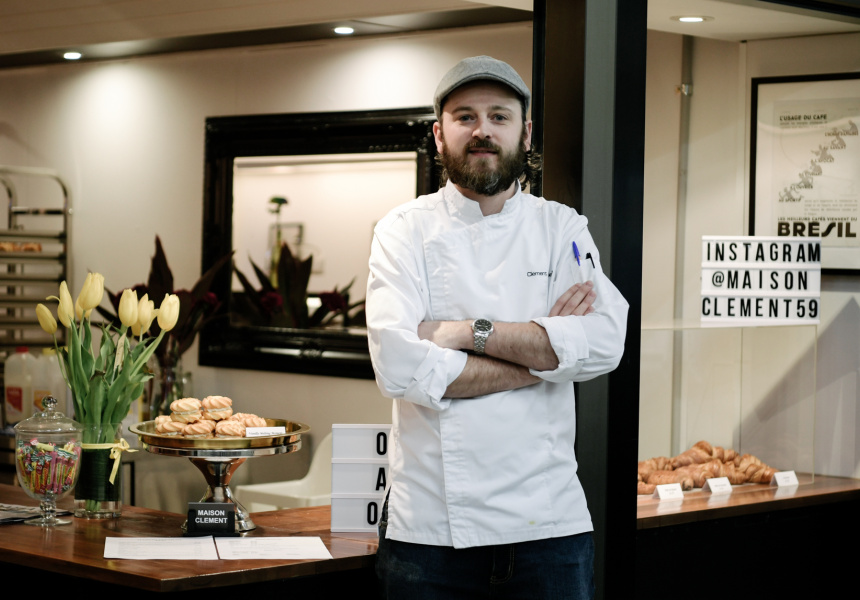 It’s not often a single dish captures the character of an entire venue, and its owners. But Clement Labaere’s snail and mushroom ragout is as perfect an example of French-Australian fusion as you’re likely to find.

Beyond the tarnished edges of the deli-style fridges, the venue bears little resemblance to the drab snack bar that stood there previously. The look is simple and purposeful and tells something of the Labaere family’s story. A World War One map of Labaere’s birthplace, Hazebrouck, made by the Australian Army, hangs opposite a map of Australia from 1836 that was printed in France.

Personal touches like this run through the entire venue. “In France we use ‘maison’ [which means “house”] and your name, or your family name, to show it’s a family business,” Labaere tells Broadsheet. He runs Maison Clement with support from his wife Rosie. “She’s good at decorating and marketing,” he says. “I’m good at cooking, but that’s it.”

When Labaere landed in Adelaide he worked at Brighton’s acclaimed Aux Fines Bouches before relocating to Cliché to establish the venue’s daytime menu and patisserie alongside head chef Fabien Streit. But the task was a little outside his comfort zone.

“Pastry in France means gateaux,” he says “But pastry here means croissant and pan au raisin and bread and, well, everything. In France that’s the baker’s job.” He pushed himself to acquire new skills and now that he’s fronting his own venue, is reaping the rewards.

Labaere is proud to be making a name for himself. He says the timing felt right. “I left Cliché and this [site] came up a week after. It was like a sign.”

He says a family business belongs in a market – alongside the fruiterers, smallgoods makers and dairy families. “The idea of this place is family cooking. I make croque monsieur like my grandma used to make it.”

Traditional dishes like this – or the raclette and goat’s cheese on toast with potato, greens and walnut salad – sit adjacent to homemade granola and cereal with fruit and yoghurt on the tight one-page menu. The real action happens at the display counter, where Labaere’s talent as a pastry chef is centre stage. Everything is baked on-site daily and already most items are selling out.

Labaere gets fresh fruit and veg from neighbouring traders, but still procures specialty ingredients from further afield. The chocolate for his chocolate tarte comes from France, and he orders in butter from New Zealand – by 25-kilogram blocks.

“When you tell people you’re a French chef, they always expect fine dining,” he says. “They associate ‘French food’ and ‘expensive’. We’re doing French food at a market price.”

This article first appeared on Broadsheet on September 28. Menu items may have changed since publication.