Barista and roaster Sean Do has brought his cafe – and coffee expertise – home to Adelaide (and enlisted long-time friend Dos Cavuoto). Visit for house-roasted coffee, house-made doughnuts and all-day breakfast. 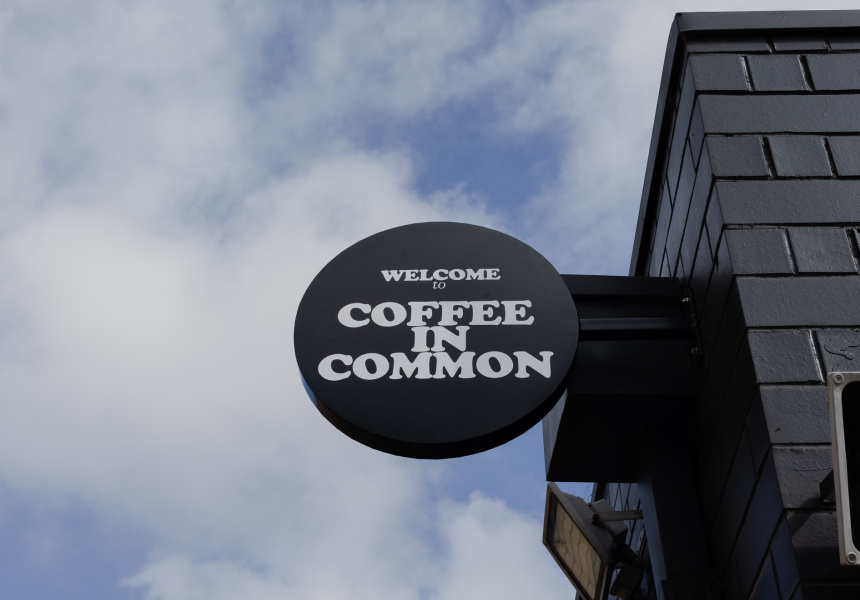 Long-time friends Sean Do and Davide “Dos” Cavuoto know there’s a lot of room to play with in the former Hindmarsh warehouse they've moved their cafe, Coffee in Common, into. But they like having the space. “People did come to us and say, ‘Oh, you’ve got to fit more people in here, you’ve got the room for it’ … but that’s not really the idea. We want people to be able to sit down and take their time,” says Cavuoto. “We want people to experience the coffee and experience the ambience – to drink everything in, excuse the pun.”

Japanese minimalism inspired the fit-out – Do and Cavuoto worked closely with architect Elias Khoury (E-Squared Studios). The result is a relaxed, light-filled space with recycled chairs and touches of greenery on and around the tables. A large bar runs down the middle of the space, inviting visitors to watch their coffees being made – via the La Marzocco Modbar, or manual brewing section for filter – and to ask questions about the origins of what they’re drinking.

Cavuoto and Do met almost a decade ago when both worked at Cibo in Marion. They went their separate ways, but both eventually ended up in Melbourne where their respective passions for coffee were cemented. “I got sucked into the coffee culture over there very quickly,” says Do. “They were so far ahead in terms of hospitality, and coffee, at the time. I fell in love with it.”

The first iteration of Coffee in Common opened in Essendon in 2015; solely as a cafe, before Do began roasting about a year later. He initially roasted beans at Bureaux Collective, a “co-roasting” space and cafe incubator, before Coffee in Common got its own on-site roaster. The cafe closed in Melbourne in 2019, when Do decided to pack up and move back to Adelaide.

The new iteration opened at the beginning of the year on Bacon Street in Hindmarsh – just a stone’s throw from the Gaganis warehouse. Do and Cavuoto both love the industrial location, but there are practical reasons for the choice: it’s difficult to get approval to roast coffee in residential areas.

A few shelves by the front door act as a retail space for the coffee, which is roasted out the back (it's also available online and at Sibling). “We have quite a lot. We have three different house blends, then we always rotate our single origins – at the moment, we’re carrying about five or six different single origins,” says Do. “We also have a kind of reserved coffee list, which is our first direct purchase from farm to roaster. They’re called Ninety Plus Coffee and they have an estate in Panama, where they grow very rare, exotic coffees … They’re a little more pricey, but very unique coffees.”

Pastries are made in-house by chef Dieter Georg (previously at Elementary and Adelaide Oval), with doughnuts a specialty – think coffee-glazed rings filled with chocolate ganache, doughnuts topped with shaved carrot and walnut, and a mixed-berry glaze topped with strawberries.

You can splash out on a lobster tail served in a brioche bun with a herb and egg salsa, citrus butter sauce and smoked apple for lunch. Otherwise, there’s chicken roulade, a herb-crumbed pork loin, and a caramelised nectarine salad topped with a honey mustard and yoghurt dressing. Sandwiches, teas, sticky chai, fruit juices and Strange Love sodas round out the menu.

Do and Cavuoto have more plans for the space. They’re keeping hush right now, but Do says it’ll be “alcohol-related, and night-time.”