Now Open: A Very Red, Upscale Bistro From The Stag and NOLA Team

The Stag’s new neighbour is bridging the gap between casual and high-end dining. 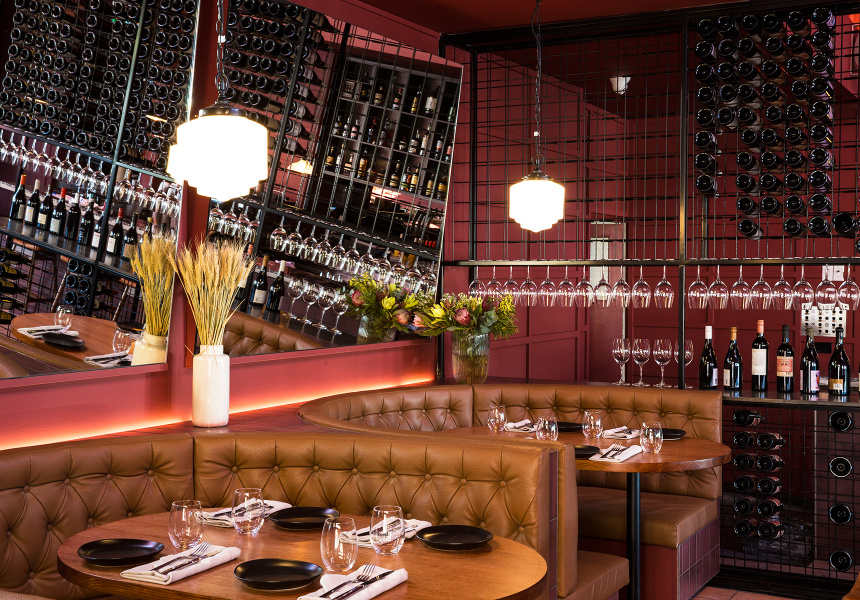 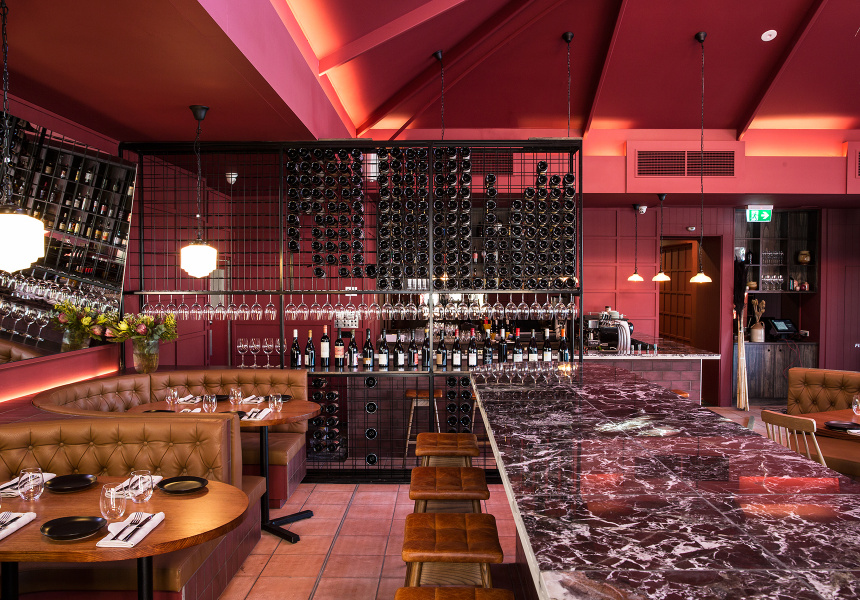 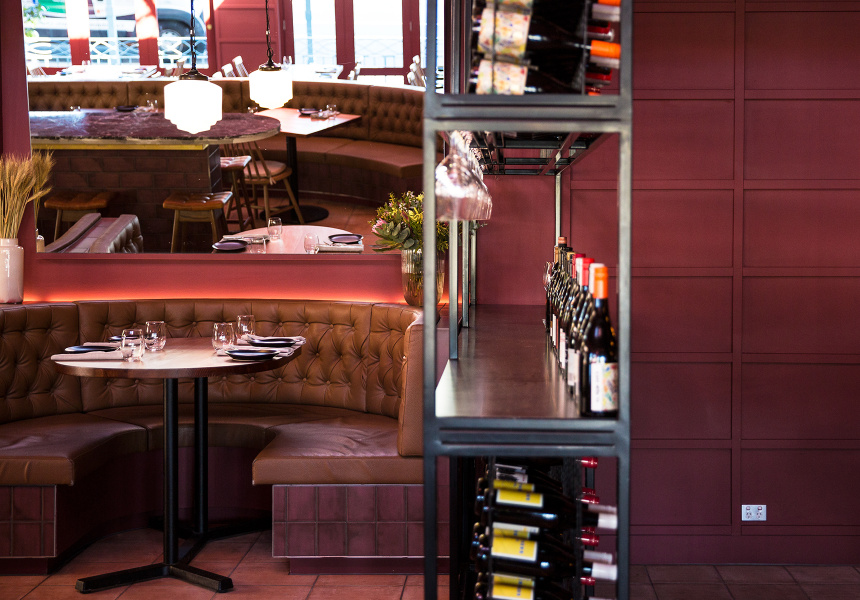 By some definitions you could call Charlick’s – the new restaurant under the Stag roof – fine dining. Chef Blake Drinkwater’s (ex-Orana) artful and intricate dishes feature element upon element – items such as walnut emulsion, fermented leek gel and black garlic “leather”. The latter is a month in the making, slowly blackened in a rice cooker then pureed, smeared onto a mould and dehydrated until it resembles “a roll-up”.

But zoom out from your meal and Charlick’s is more friendly neighbourhood bistro than high-end restaurant. There are rustic homey dining tables and chairs (sourced from Gumtree), wooden chopping boards hanging from the wall and native blooms strewn about the place. In fact, it feels a little bit like your mum’s kitchen – if your mum had a killer natural wine collection.

The restaurant is named after William Charlick, who established the Adelaide Fruit and Produce Exchange on the same block in 1904. It’s a history that informs the site today. “The markets [sold] fresh, local produce to families,” says Brown. “That’s the concept. And it runs through the design – that’s why there are big family dinner tables where everything’s thrown in the middle.

“We're trying to hit that middle ground where the food is outstanding and very technical but it’s a comfortable place to be in. The music might be a little bit loud but the food is high-end, the service is high-end and the drinks are top-notch.”

Designer Claire Kneebone has completely revamped the space. All that remains from its last incarnation are the booths (which have had a facelift with matte subway tiles) and a floor-to-ceiling wine rack, crammed with minimal intervention drops from small-batch Aussie-only producers.

The chintzy wallpaper has been peeled away and the walls painted a bold burgundy – at Kneebone’s suggestion. “I like to think it’s got to do with red wine. And the Australian earth,” says Brown. The carpet has also been ripped out and replaced with red-ochre porcelain tiling. The theme colour extends from the walls and floor to the ceiling and red-marble bartops.

Look up for an eye-catching Australian-bush-inspired installation – or “bird’s nest” as Brown calls it – by local plant designer Jos Koolen. “We were looking for a contemporary feature that wasn’t indoor plants,” he says. “We wanted to utilise dried leaves and grasses. It’s a bit of a feature to make the room more cosy.”

Elements of the Australian landscape are on the plate, too. When Broadsheet visits, Drinkwater has spent the morning foraging. Beach mustard, picked at the beach near Drinkwater’s house, accompanies a beef short rib with anchovy, dill pickle and that aforementioned leek gel.

Back to that garlic leather. It tops the confit chicken thigh, served with smoked shallot mayo and oyster leaf. There’s also cured kingfish with pickled radish, buttermilk, horseradish and blood lime; and for dessert, a mille-feuille with crème patisserie, whipped cream, yoghurt powder and raspberry jam.

It’s an approach inspired by his time at Melbourne’s Dinner by Heston. The young chef has also worked stints at Attica and Noma – two restaurants widely considered among the best in the world – not to mention his time as sous chef at Orana a couple of doors down.

Two more from Orana join him in the kitchen – Alex Thomas and Jae Wilkinson. “It’s so easy to transition over because we’ve worked together before,” says Drinkwater. “We all get along really well.” The three share a kitchen with The Stag team, which is led by Justin Penman. But Charlick’s is its own beast, from the food to the fit-out.

The kitchen informs the beverages, too. “We’re trying to utilise a lot of the byproduct from the kitchen through the drinks list,” says Brown. “Blake pickles rose petals for one of the dishes, so we’ve taken that rose petal water – pickle liquid – and used that to make a rose-petal shrub with 78 Degrees gin. There’s also a hot buttered rum … on top of that we use the corn husks [leftover from another dish], then we dehydrate them and blitz them into a powder. We’re trying to utilise everything we can to be as sustainable as we can.” Another cocktail features rendered duck fat with Never Never gin, vermouth and bitters.

The wine list leans natural – there's locals Shobbrook and Commune of Buttons alongside WA's Brave New Wine – but Brown says there’s something for the whole family. “There are only 50 wines, which is not that many … but it’s very highly curated. So we’ve got something my dad would drink, which is your typical heavy red … but more in a Spanish style.

“And you might have a Barossa shiraz but it might be almost like a rosé, like slightly sour. The menu is [ordered] stylistically, not by variety – so textural, heavy, fresh. With the drinks, just like the food, we wanted to have a really Australian and local focus. All of the wines are Australian and a lot are younger up-and-coming winemakers or smaller producers.” And to finish off?

“We want to finish every meal with South Australian port,” says Brown. “We’re going back to the classic family dinner table.”

This article first appeared on Broadsheet on September 14. Menu items may have changed since publication.