For Kardachi, it’s been a long time coming.

Your local fish and chip shop, this is not.

Chef Chris Robinson (former head chef at Goucho’s) heads up the sizeable kitchen, which features a shichirin or hibachi grill like the one found at Leigh Street “firehouse” Shobosho. It’s the setting for a line-up of chargrilled Ortiz anchovy soldiers, line-caught Fleurieu squid and Spencer Gulf prawns cooked over glowing coals.

A strong Japanese influence weaves through the menu, which gives a nod to the classics with contemporary twists. “People want clean, punchy seafood,” says Kardachi. “It’s salty and it’s sea-breezy and it’s hot down here … so you’ve got traditional fish and chips and you’ve got really fresh, clean, zingy flavours that cleanse the palate.”

For something lighter, go the Port Lincoln kingfish sashimi or ocean trout tartare from the menu’s “raw” section, or opt for an Ortiz anchovy salad with crisp iceberg wedges.

The “catch of the day” comes courtesy of sustainable fishery Fair Fish. “We buy direct from the guys who are out there fishing and they can get it to us that night or the next morning,” says Kardachi.

The cocktail list is suitably beachy. Expect a classic Blue Lagoon; a white miso and burnt caramel Espresso Martini; and a Pina Colada that subs in coconut water over milk. “It’s not as creamy and rich; it’s a little bit cleaner,” says Kardachi.

The fun, casual and retro Studio-Gram fit-out was designed to emulate a beach shack, right down to the blue and white colour palette, yellow and white umbrellas and date palm centrepiece. A takeaway window caters to those who’d prefer to eat their fish and chips on the shore, a literal stone’s throw away. 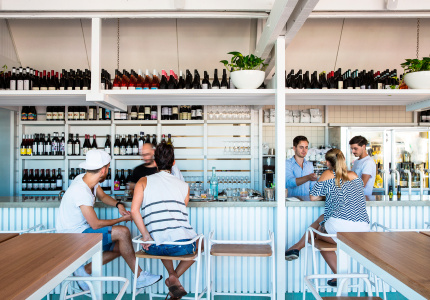