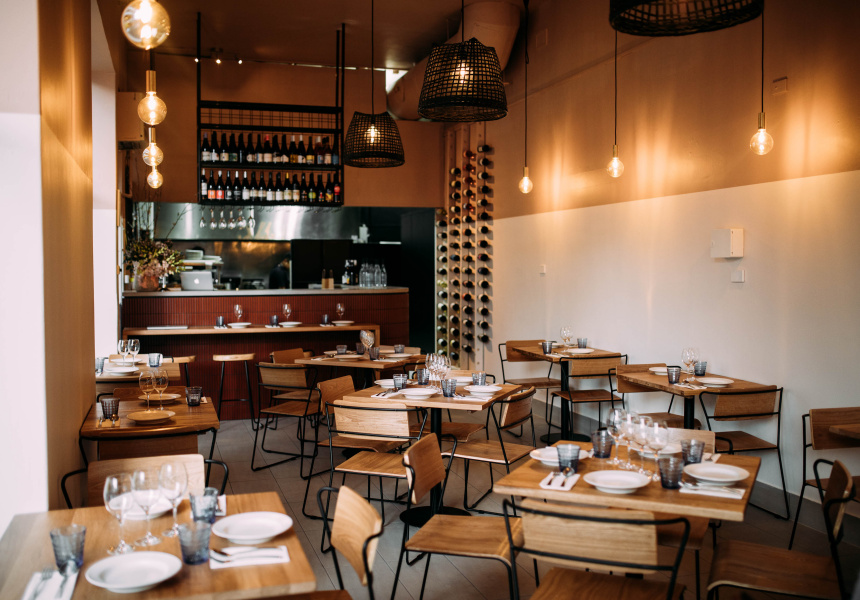 “Are you the yellow-and-black Thai restaurant next to Hungry Jack’s?”

It became the Pulteney Street restaurant’s identity. “We were very nervous to step away from that after four years,” says Daisy. “But we realised Terry’s food was better than the interior – by a long shot.”

Crafty Design’s Candice Papagiannis and Dave Lawson worked on the refurb and rebrand. The brief drew from Terry’s colourful backstory: “He’s a birdwatcher, he’s been a monk and what connects those two things is dawn and dusk,” Daisy explains.

After a three-week renovation, the slimline space is almost unrecognisable from its former self.

While Sukhumvit Soi 38 takes its name from Bangkok’s famous street-food market, “Thai food is much more than that,” says Terry. “The street-food theme we opened with limited our capacity to introduce people to new dishes.”

Now, the menu zooms in on Thailand’s six regions. Much like a wine list, each dish’s region of origin is listed below it.

As is customary, the previous “feed-me” menu progressed through snacks and starters, salads, and curries and stir-fries. “We were always really uncomfortable with that ‘cause it’s not how Thai people eat – everything’s on the table at once,” Daisy says.

The newly instated three-course iteration traverses Thailand from the bottom up. Start with the south, move through central Thailand and finish in the north. Unlike a “Westernised” banquet menu, each region’s snacks, salads and mains arrive at the table (and are meant to be enjoyed) together, in one course. “Eat just the way a family in [that region] would eat,” says Daisy.

Matched wines (from a more-than-doubled list) align with the region’s main flavour profile. Though Daisy’s considering the prospect of simply matched “booze”. “I feel strongly that some things are just better with beer,” she says.

Terry’s masters in environmental sustainability (he’s a man of many talents) comes through in the menu. Two southern-style dishes reduce the restaurant’s reliance on farmed meat: there’s a goat curry with betel leaf and a take on oxtail curry that subs in an eight-hour-cooked kangaroo tail.

“I don’t think we’ll ever be able to get rid of the pad thai or green curry,” Daisy says of the Soi 38 staples. She feels similarly about the spring rolls, which are now stuffed – quite fancily – with lobster. “If we’re gonna have them on the menu, they have to be special.”