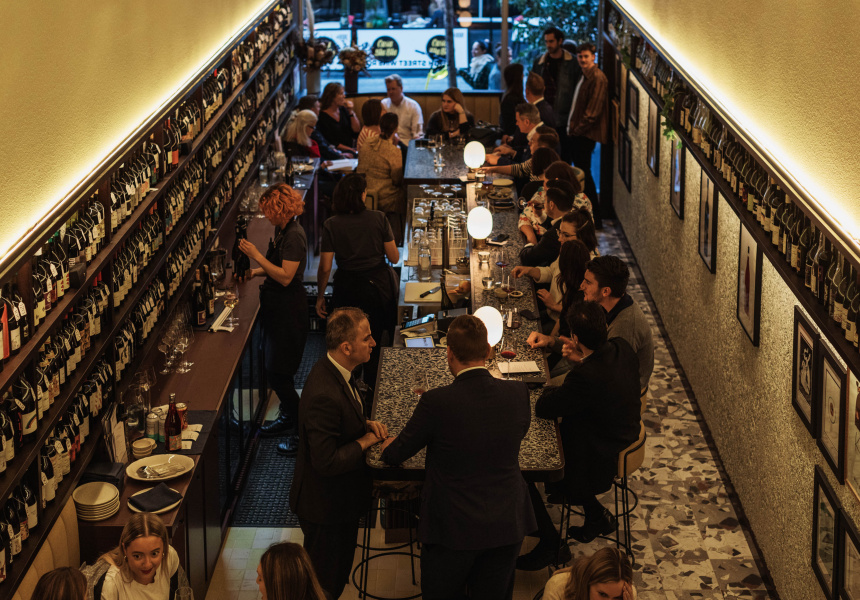 What was once a longstanding city drycleaner has been transformed into a cosy new bolthole – Leigh Street Wine Room (LSWR) – and there’s not a trace of the former tenant.

Well, save for the signage outside. “Through the whole build we always said, ‘What’s one thing we can keep to honour the space?’” says owner Sali Sasi.

“We were starting to look for people to redo the light box, and we were wondering if we should keep it or get rid of it … and I was like, ‘You know what? I’m going to put up an Insta post and find out what people want.’ Literally 13 people said get rid of it and everyone else who voted said yes. So the people have spoken.”

It’s the sole remainder of the original site, which has been given a schmick Studio-Gram makeover with a newly built mezzanine, a terrazzo bar and floor, exposed acoustic wall panelling, and – the piece de resistance – a striking, lofty archway that runs the length of the room.

It’s the first thing you’ll notice when you walk through the door, until you spot the wall of wine – 400-odd bottles of minimal-intervention drops selected by Sali’s Sydney-born-and-bred husband Nathan Sasi, who’s also the chef and co-owner.

Taking its cues from hotspots such as 10 William Street in Sydney, P Franco in London and Clown Bar in Paris (“places we’ve had great experiences,” says Sali), the intimate wine bar – which opened in September – is a celebration of natural drops. The huge list homes in on Australian, French and Italian wines, with a healthy contribution from the Adelaide Hills.

“I’m actually blown away by how many incredible natural-wine producers there are in South Australia who aren’t even represented here in the city,” says Nathan, citing the example of Anton van Klopper of Lucy Margaux Wines, who’s regularly hailed as the godfather of Australia’s natural-wine movement.

“He’s probably one of the biggest natural wine producers in Australia and his wines are stocked nowhere in the city. We want to really showcase those guys, and not just on a professional level – they’re friends of ours as well, so to be able to incorporate them into our business is really important for us.”

The list is wide-ranging, from a $50 house sauvignon blanc (with a hint of chardonnay) made in collaboration with Gentle Folk, to a $600 bottle of Valentini, considered one of the greatest producers in Italy. “We have something that’ll suit every palate,” says Sali. “We have things that are super funky but then we have things that are very easy to drink – it’s not intimidating to non-natural-wine drinkers.”

Beginners are in good hands with head somm (and wine consultant) Meira Harel (ex-Town Mouse in Melbourne), who’ll continue to build the wine list over the coming months.

A selection of cured meats – including mortadella, bresaola made from Mayura Wagyu, capicollo, and fennel-and-white-wine salami – are made in-house. “All the animals come in whole, except for the beef,” says Nathan. “So we’ll break down everything and utilise all the cuts. It’s definitely a labour of love, very time-consuming, but I think it tells an incredible story.”

Dessert includes a soon-to-be-signature chocolate mouse (yes, that’s the correct spelling), which was inspired by a dish Nathan had at Clown Bar. There are also wild-yeast-fermented beers by Wildflower and pre-batched cocktails, with branding by Sydney artist Owen Leach (the bar's identity, including logo and coasters, is by Brisbane artist Shyanne Trutwein). 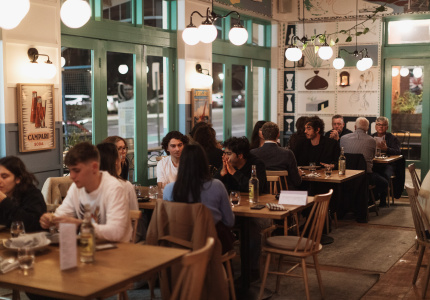 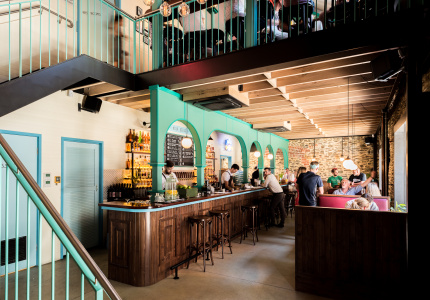