This modern-day chook shop remixes your neighbourhood favourite for the small-bar scene – and crowds are flocking. 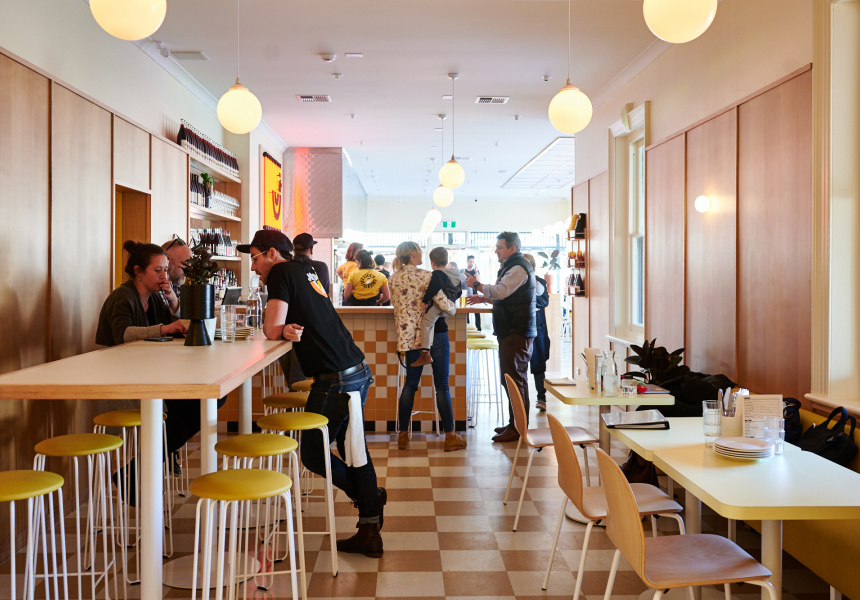 The charcoal-chicken shop is a unifying experience for many Australians who remember after-school trips to the neighbourhood local to pick up a whole chicken and chips wrapped in paper, which you’d hastily rip open in the car on the way home.

Chef Adam Liston (Shobosho) has fond memories of his local chook shop, and he’s continuing the tradition with his young daughter. Now he’s reinventing the genre for the modern diner at his new restaurant, Joybird.

When Broadsheet visits on opening night, the scene is vastly different to the chook shops you know. There’s table service, for one. There’s also music pumping, mood lighting, pét-nat by the bottle and cocktails. And the formula is proving popular. It’s just ticked past 6pm when I take a seat at the bar and almost every table is full, occupied by well-heeled Hyde Park locals, families with young children, and young professionals you’d normally find on Leigh and Peel Streets. But that’s the pull of chicken, says Liston.

“One of the things we saw [travelling] in Singapore and Hong Kong and Japan, even Kazakhstan, the thing that is so common in the world is chicken,” he told Broadsheet earlier this year. “Everyone eats it, no matter where you’re from.”

When we speak again, after Joybird’s opening weekend, he sounds a little more tired. “The last few days have been stupid,” says Liston. “We had 450 people on Saturday. We weren’t expecting that – we knew we were going to be busy but not that busy … The restaurant’s been full since we opened for lunch and dinner.”

Even more surprising to Liston is how popular takeaway has been. “We haven’t launched UberEats yet … and we weren’t even answering the phone so people were coming in and actually waiting. And the percentage of people who did that was huge.” He wagers almost 50 per cent of the first four days of trade was takeaway orders.

As you might have guessed, charcoal chook is the main game, and it’s available to order in quarter, half and whole serves. The birds – sourced from Hazeldene's Chicken Farm – are butterflied, brined overnight and grilled in cages on a custom rotisserie. “We open them up so they cook quicker and it brings in more flavour,” says Liston.

Choose from three types: Joybird spice, Balinese yellow curry, and, soon, a “really spicy fire chicken”, says Liston. “We noticed people were after something super chilli-focused, which we didn’t really have on the menu. So that’ll kick in on Thursday.”

The Joybird is brined in salt and kombu then coated with a dry rub of seven “secret” spices and cooked until golden brown. It’s the perfect balance of crisp, scorched skin and impossibly juicy meat – kept tender with sake and yuzu juice, which is sprayed on the bird while it’s cooking.

The wider menu trades in nostalgic comfort food. There are chicken-fat-roasted potatoes; yiros-style wraps (choose from spit-grilled char siu chicken or lamb doner kebab, sliced and stuffed into flatbreads or flaky, buttery roti); a chicken-katsu patty melt with mozzarella and pickled zucchini; fried chicken; and a “chick-o-roll” encased in rice paper. “It’s really more of a spring roll now,” says Liston. “But the texture of the rice paper, when you double layer it, has a very similar texture to what an actual Chiko Roll has.”

There’s also a hot chicken roll (a riff on the daggy servo classic) and a many-layered marvel of a club sandwich, which Broadsheet caught a preview of in June. Plant-based options include “Chinatown slaw” with wombok, red cabbage, herbs and crispy noodles; burnt cabbage with sunflower seeds and green sauce; and barbequed corn with miso butter and parmesan.

“It’s for everyone,” says Liston. “It’s all-day, it’s affordable, it’s something you can come and have three times a week if you want. You can eat it dirty or you can eat it clean.”

The wine list features low-intervention drops by the bottle (including a Basket Range pét-nat, a Scintilla savagnin and Ngeringa pinot noir) and a tight crop of wines by the glass. There are also juicy-red and crisp-white house wines by Delinquente Wine Co, beers on tap and in tinnies, and non-booze-y options such as the Native Iced Tea (with Davidson’s plum, strawberry gum and anise myrtle).