Emma McCaskill: Life After The Pot

Since leaving The Pot seven months ago, acclaimed chef Emma McCaskill has been getting her hands dirty, cooking and foraging at Botanic Gardens Restaurant. She’s now gearing up for four Tasting Australia events – and there’s big news on the horizon. 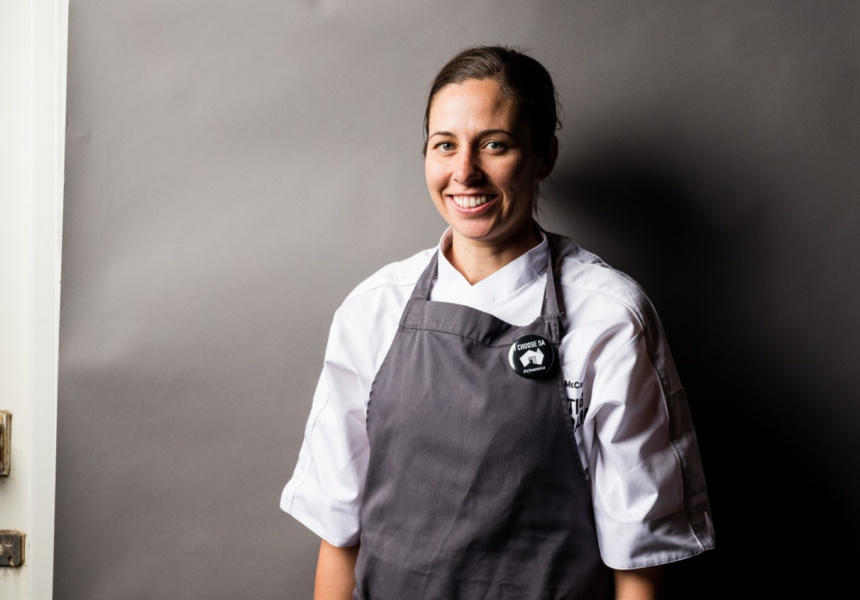 “I really wanted to work in this garden,” says Emma McCaskill with a smile. “It’s amazing – that walk among the fig trees is almost prehistoric.” We’re sitting in Botanic Gardens Restaurant, where she’s been cheffing since she left The Pot last year after 18 months at the helm. It’s only a temporary position (more on that later), but it’s one she’s embraced wholeheartedly.

It’s just past 10am and all’s quiet, save for the birds chirping in the trees outside. At midday, the place will erupt with well-heeled diners filing in for lunch. But right now McCaskill and executive chef Paul Baker are taking a moment to enjoy the surroundings. An abundance of plants, shrubbery and towering Moreton Bay fig trees can be seen from almost every angle of the rotunda-style restaurant.

“I felt like I needed to be amongst greenery and hands-on with produce again,” McCaskill says of her decision to join Baker in the kitchen. “I did a lot of foraging [in the past], especially in England [at two-Michelin-starred Sat Bains] where I was taught by a forager from Denmark … so I was itching to go pick stuff.”

With a 51-hectare garden as her culinary playground and a bounty of produce quite literally at her doorstep, she’s in the right spot. This Sunday, McCaskill and Baker will share their green lung with diners at Tasting Australia’s Down the Garden Path event. That name is literal, by the way. “We’re starting at the museum, which is higher ground than the restaurant,” quips Baker.

The dinner will begin at the Museum of Economic Botany (with snacks and drinks) before guests move into the restaurant for a five-course meal prepared by McCaskill, Baker and visiting chef Victor Liong from Melbourne’s energetic Chinese diner Lee Ho Fook. “We’re all cooking from the same garden, with our own interpretations,” says McCaskill.

She’s built a dish around the garden’s natal plums (native to South Africa), which she’s been itching to use since she started at the restaurant. “I’ve made a sweet-and-sour sauce from the plums and I’ll be dressing kingfish sashimi,” she says.

Liong will plate up drunken Goolwa cockles with rice noodles; Nomad chickens in white soy and ginger; and veggies from the garden. “We have so much Asian produce here: galangals, ginger, prickly ash trees, spring onions and mints ... so there’s a whole world of stuff for Victor to harness,” says Baker.

McCaskill is also on dessert duty: she’s making a pumpkin and preserved-lemon tart with labneh and candied pepitas. She’ll also bring back her famous paratha (an Indian flatbread), which became a signature of hers at The Pot.

McCaskill has an enviable CV. She was the first non-Japanese chef to work at Narisawa in Tokyo, a two-Michelin-starred restaurant and number 18 in the 2017 World’s 50 Best Restaurants list. She also cooked at Tetsuya’s (Sydney), Ezard (Melbourne) and the aforementioned Sat Bains (Nottingham, England) before taking the reins at Magill Estate Restaurant with her then-husband Scott Huggins.

Her training in Japanese kitchens here and abroad has shaped her cooking, with a strong focus on technique and command of ingredients. These influences will be on display at Tasting Australia’s Glasshouse dinner East Meets West on April 12, where McCaskill is cooking alongside world-class chefs Chiho Kanzaki (Restaurant Virtus, Paris), Alex Munoz (Labart, Burleigh Heads) and local legend (and Tasting Australia’s festival director) Simon Bryant. She’s been charged with the main course, which will feature Mayura Station Wagyu hanger steak – cooked over wood and brushed with garlic and soy – served with a miso and sesame emulsion and wild asparagus.

On top of that, she’ll be cooking with Karena Armstrong at The Salopian Inn as part of the sold-out Tasting Australia event Family Dinner on April 10, and she’s leading a cooking class for Tafe SA’s L Plates series on April 6, where she’ll show participants how to make her favourite accompaniments such as pickles, dal and chutneys. It’s a glimpse into a new style of cooking for McCaskill.

She’s started to stray from her fine-dining training to take inspiration from her Indian-Australian heritage, playing with the fragrant ingredients and big flavours she grew up with. “I think it started at The Pot and being back [home] in Adelaide,” she says. “I’m kind of going more towards my Indian roots … I’ve felt the need to use those flavours more and I’ve become more interested in my heritage.

“I’m starting to cook more share-style food, wholesome and simple but delicious with lots of spice and bigger flavours.”

That’s the kind of the food she’ll be cooking at her next venture – which she’ll start when she leaves Botanic Gardens Restaurant later this month. She – and we – can’t announce it just yet, but McCaskill is happy to share some crumbs: “It’s got a wood pit … it’s a pub, which I’ve never done before – but it’s not a ‘pub pub’.”

“I’m very excited but I will miss working with Paul – what he’s doing here is incredible,” she says. “For him to allow me to work with him and come up with ideas for the menus is really special. A lot of people would be like, ‘No it’s my menu, it’s my food’ but he’s been really open … I haven’t felt like I can’t do what I want to do.”

“It would be silly to have someone of Emma’s skill and experience and not have her [input],” adds Baker.

The move means she’ll hang up her foraging hat again, but “there’s a rooftop garden” at her next venture, she assures me. “And there is a community garden nearby, which I can access.”

Keep an eye on Broadsheet for more details.

For more information on Emma McCaskill’s Tasting Australia events, or to book tickets, visit the website.