One Day During Vintage, With Ngeringa's Erinn Klein

Find out exactly what goes into that bottle of wine. 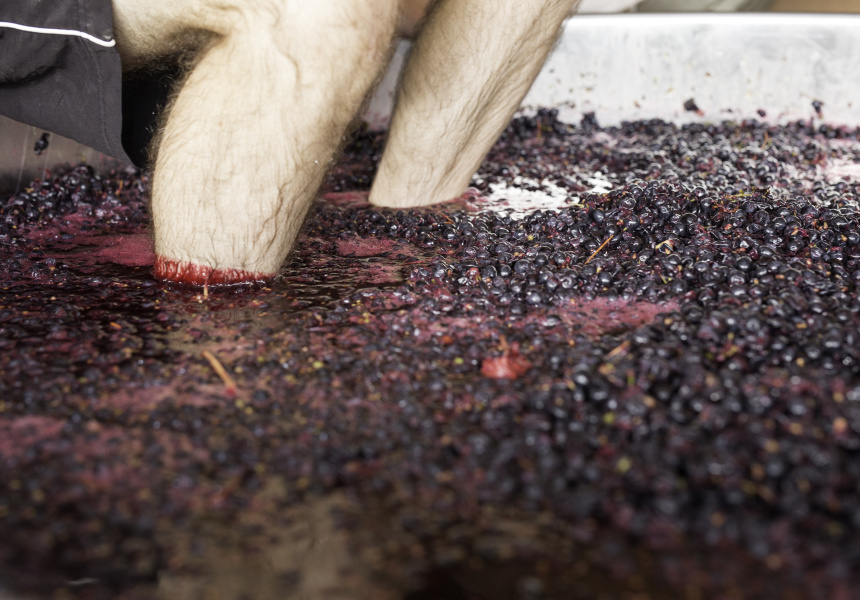 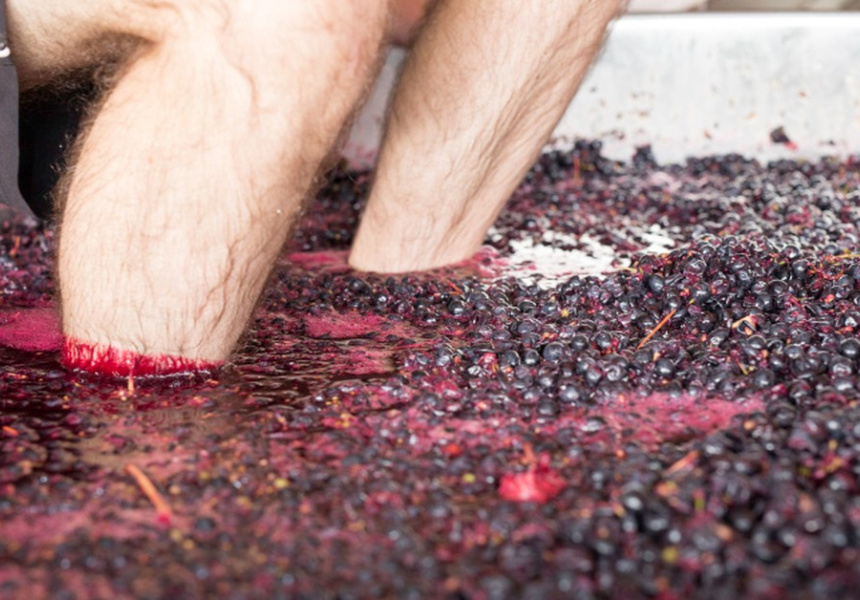 For Adelaide Hills winemaker Erinn Klein, there's no such thing as a typical day during vintage. “There's not enough sleep, that's about the only constant,” he says with a tired laugh as he leads us around the Ngeringa winery.

Klein was ahead of the curve when he and his wife Janet released their first minimal intervention wines in 2006, and the property is still a working biodynamic farm. Their five acres of vines are spread over three vineyards around Nairne and Mount Barker, and unlike many small winemakers, they are in charge of every aspect of the winemaking process.

Any agricultural endeavour will always exist at the whim of the elements, but Klein has ensured he has as much say in how the final product turns out as possible. “The key for us is growing our own fruit, so we're in control of our own destiny. We bottle onsite and do everything ourselves,” he says. This attention to detail accounts for the lack of sleep.

As the peak of summer passes and the grapes start to ripen, he heads out among the vines each morning and night, checking the fruit to determine the perfect moment to pluck it from the vine. The timing is different for each variety but it's generally a matter of finding the right balance between sugar, acidity and flavour. Like so much about winemaking there's a lot of science behind it, but Klein's approach seems equally informed by centuries of tradition and his own intuitive reading of the thousand intangible factors that inform grape maturation.

Ngeringa's vines are so closely planted that a mechanical harvester won't fit between them, but Klein prefers to pick by hand anyway. It allows him to be more selective about what's coming in. When we arrive a row of grapes is being separated into greener fruit for a viognier and darker fruit with a higher sugar content that will help add fizz to his pet nat.

The crew of eight pickers is mostly made up of French backpackers, and the long hours mean they all live onsite, spread between a tent, a van and Klein's old family home. The picking starts early in the morning, while it's still cool, and goes until mid-afternoon when they break for lunch. A rotating roster determines who's cooking, and this year they've been trying to outdo each other with dishes like coq au vin and beef bourguignon made entirely using produce from the farm. A few bottles of wine are placed on the table – but not too many as there's still work to be done after lunch.

A normal day’s harvest might be two and a half tonnes of fruit, but the team can bring in as much as four tonnes during peak times. Back at the winery, it’s weighed and then most varieties are mechanically de-stemmed and lightly crushed. This breaks the skins and brings the sugars inside the fruit into contact with the natural yeasts on the outside, which is how the fermentation process begins. Whites get pressed immediately and pumped into a stainless steel tank overnight before going into barrels the next day. Klein leaves a little room in the barrels until the fermentation process is finished, and then tops them up to prevent too much air contact and oxidation. That then becomes part of his daily routine for the rest of vintage.

And that, he laughs, is the easy part. “The reds are a bit more involved, that's a week or two of chores.” Because they derive a lot of their colour and flavour from time spent on skins, they sit in the open tanks before getting pressed. The skins naturally float to the top and form a cap, which needs to be broken several times a day. At Ngeringa, that’s done by hand (or foot) in one of the more colourful aspects of the winemaking process. As the vintage progresses it’s common to see fingers and toes taking on a purple hue.

With the fermentation process underway, Klein monitors the taste, temperature, acidity and sugar levels of the nascent wine to make sure everything is going to plan. He’s more concerned with making good wine than adhering to a strict ideology, so he’ll step in as necessary. “On the whole we're pretty minimal intervention but we don't make natural wine. I will add acid or filter it if I think it needs it.”

The picking this year started on February 10 and will wrap up next week with the sangiovese and nebbiolo, and then it’s time to bottle the pet nat, which will be a blend of the viognier we saw being picked with pink semillon, early-pick shiraz rosé, pinot and chardonnay.

With more than 10 varieties of grape and multiple styles of wine to keep track of, Klein is less like a conductor than a one-man orchestra, trying to be everything to every wine. It’s why he works until anywhere between 10pm and 2am during vintage, though he tries to make sure that there’s at least one day a week when fruit is not coming in, both to give the pickers a break and to give him a chance to look after everything else.

After all, he still has a farm to run. He has a full-time gardener tending the growing veggie plot, but with a herd of cows and 200 sheep, there's always plenty to do. That flock will get slightly smaller soon, as he’s about to send half a dozen lambs and a bunch of vegetables to ex-Orana chef Shannon Fleming, who will be making sure everyone is well fed at this year’s The Festival At Basket Range. Though Ngeringa isn’t located in the Basket Range, Klein was an integral part of the event's forerunner, the Picnic at Marble Hill, and one tradition he’s more than happy to stick with is the end of vintage party.

Sample Ngeringa's drops at The Festival at Basket Range on April 7. Tickets are available here.