Ahead of his Adelaide Festival Long Lunch, learn how the local chef draws from his Greek heritage, Asian training and intercontinental experience – while making it look simple. Chef Jordan Theodoros rarely cooks for the public outside the Peel St kitchen. Sitting in his empty restaurant before service, we ask him why. “Why don’t I do a lot of events?” he clarifies. “I generally just like to focus on this place.”

How, then, did he agree to cook for 200 people at the Palais – a floating barge on the River Torrens – as part of Adelaide Festival’s Long Lunches? “Well, I didn’t in the beginning,” Theodoros says, quite frankly. “What I always find awkward is when someone really likes what you do but then they try and get you to do what they want you to do.”

That wasn’t the play for event curator and director Gill Minervini. A softly worded email, implicit trust in Theodoros’s cooking and a promise to let him do what he does best got her across the line. “I don’t know how I got lucky, but I’m delighted he’s onboard,” says Minervini, a Peel St regular (despite living in Sydney). “His approach to hospitality and eating is very egalitarian.”

There’s a reason Theodoros’s food feels universal, both in appeal and flavour. “There are a lot of great cooks around here – and I don’t profess to be one of the better ones – but a handy tool I have is I can choose from different cuisines when I feel the need,” he says.

“I feel pretty comfortable with a whole lot of different styles of cooking. I’m not across everything, by any means, but a lot of it’s a natural extension of what I’ve learnt in the past.”

Undertaking an apprenticeship with chef Lew Kathreptis at Greek restaurant Mezes in the late ’80s, Theodoros built on his heritage. “It was just like what I grew up with ‘cause [Kathreptis] was Greek as well,” he says. “He taught me the philosophy of being generous with food and using an abundance of delicious ingredients.”

He went on to cook under now-Long Chim owner and chef David Thompson at Darley Street Thai in Sydney, and live and work in Asia and the US. “It really opened my eyes to new styles of food,” Theodoros says.

His cross-cultural menus – chalked up on blackboards – have become a Peel St trademark.

“We’re lucky here, we get away with a lot of stuff,” Theodoros says. “As long as I word it in such a way that it fits well onto the board, people just trust they’ll get ‘Peel St’ food. And that’s not being arrogant, that’s just the brand we’ve established.”

Spontaneity is a big part of the allure. “A lot of places don’t change their menu once they’ve got the formula,” Theodoros says. “Once you’ve been there a few times you’ve tried everything and, say, they’re trading really well and the [owners] are taking more time out … the quality slips.”

It all starts with produce. Seasonally, Theodoros uses vegetables such as tomatoes and banana capsicums from his father-in-law’s garden. Herbs homegrown in dirt (instead of hydroponically) pack a more robust punch. “We make the guys chop everything to order, not have it all sitting there just dying in a takeaway box,” he says. “We come undone quite often during service because of that.”

Menu ideas bounce around at home. “It’s a bit of an incubator for me,” he says. “When I come up with something I always think of it as just an extension of what I like to cook at home.” Moving into the restaurant, “Of course it changes a bit but it’s the fundamental ideas of how you cook and what you cook at home that translates.”

“I want it to appear simple even though there’s probably quite a bit of work that goes in behind the scenes.”

His Long Lunch, on Monday March 12, will pay homage to the simple Mediterranean food he grew up eating. But he’s steering away from heavy meats in favour of fish and stacked-up, veg-centric dishes. Like Peel St, “It’s not smoke and mirrors, and everything plated perfectly … It’s big share plates of delicious food.”

Even the most dedicated Peel St diners will have a one-off experience. “The fish I’m doing I haven’t done before,” Theodoros says. “There are some elements people might have seen but then I’ve tweaked things.”

Share platters, matched Penfolds wines, a bespoke soundtrack for each lunch, and 200 prospective pals. “It’s my idea of heaven,” says Minervini. Ours too. 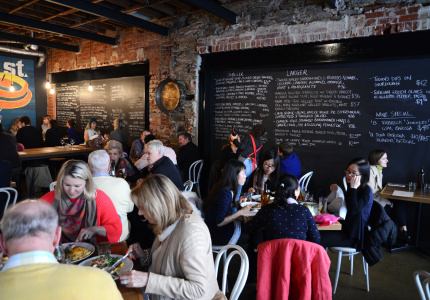