Craft Beers and Pizzateca at the "Evolved" Adelaide UniBar 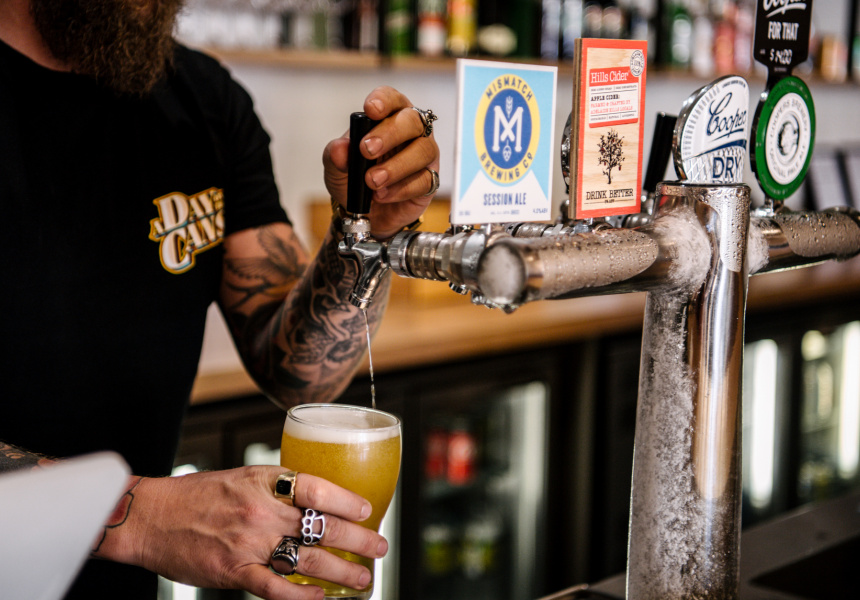 Until its closure last year, Adelaide UniBar was a local institution. Sure, it was dark inside, the fit-out was dated and the carpet was notoriously sticky, but there was a feeling of nostalgia in its walls; it had seen countless bands cut their teeth on its stage and generations of students pass through.

When the uni announced it would be replaced with a “trendy and appealing understudy” there was some outcry. But its new owners – Aaron Sandow, Gareth Lewis and Marc Huber – are better placed than most to take it on. They’re the team behind Beer & BBQ Festival and music festival A Day on the Cans, which debuted in Port Adelaide last weekend. Long-time publican Lewis also owns The Kings Head Hotel and Sturt Street Cellars.

The new bar opened last week in the former Mayo Cafe (by the Cloisters, on the ground floor of Union House). “It’s significantly different to the old space,” Sandow tells Broadsheet. “And we’ve had a little bit of pushback on social media from the old UniBar diehards that like the sticky carpet, and the rattling windows, and the shit. But I hope they enjoy this as a little bit more of an evolved space. We still want to keep it rock’n’roll, and keep it kind of dirty in here. But not that dirty,” he says with a laugh.

Sandow’s memories of the old UniBar shaped his vision for what the new space could be. The very first gig he went to, during his high-school years, was at the Cloisters – and almost every punk band he saw thereafter was in the old UniBar space. “At night, it was just a magical place ... the vibrating and rattling windows were a bit annoying, but that was its charm,” Sandow says. “I’ve been up there a couple of times since we took over here, and there’s a nostalgic feeling about it. There’s a fair bit of responsibility to take that name on.”

Sandow wants the food and drink to be top-notch. Currently on the tap list are brews from Mismatch, Sparkke, Balter and Young Henrys, among others. “We know most of the people who are putting out some of the best products in Australia,” says Sandow. “We want to test it and see how interesting we can get with the beers.”

Coffee from Dawn Patrol and pastries from Market St were road-tested for the morning crowd in the bar’s first week. For lunch and dinner there were classic pub dishes by chefs from the Kings Head Hotel. Up next? The folks from Pizzateca will come on board permanently. “A major focus of our business plan was collaboration. So, those guys [from Pizzateca] will be doing collaborations with rural producers and restaurants to do monthly-inspired dishes.”

A better experience for gig attendees is also at the forefront of Sandow’s mind. Fortunately, the design of the space – led by the University in discussion with RCC Fringe – lends itself to that. “From every part of this room, you can see the band. And the redevelopment of the Cloisters space outside, too, is a fantastic thing.” The bar opens out to the Cloisters courtyard, with rows of long benches for groups of students to soak up the sunshine.

At the end of the day, Sandow wants the new UniBar to feel as approachable as the old one. Despite being aware of heated criticism on Facebook group Overheard at the University of Adelaide, Sandow says the response from students in-person has been positive.

“I haven’t really come face-to-face with one of the haters,” admits Sandow. “But everyone has the right to their own opinion. I guess the message we’re trying to send is we’re not here for any sinister reason; we’re not here with any ulterior motive. We’re just here to bring the students their UniBar.”