Here’s where to ride out the winter, with a cocktail in hand. It’s time to retreat indoors in search of a warming pick-me-up. From the lure of a 1950s-style underground drinking den to a taste of upmarket Parisian hospitality, here’s where to cosy up – and what to drink while you’re there.

A neon “B” marks the spot for this Rundle Street speakeasy. Ascend the stairs and you’ll find it’s as much of a cultural hub as its namesake – the New York borough of Brooklyn. A bar, New York-style deli, barbershop and live broadcast music studio all roll into one. The cocktail list rethinks the classics. Warm up with a wintry Maple Manhattan – with Bulleit Rye American Whiskey, Antica Formula vermouth, bitters and Noble barrel-matured maple syrup. Under the same roof, Sunshine Delicatessen takes charge of a bar menu that would appease any New Yorker. It’s drinking food: pastrami on rye (with pickles); lobster rolls; and a pint-sized take on the New York hotdog.

A strong contender for Adelaide’s best hidden bar, West End’s Maybe Mae occupies an underground spot in the tunnel between Peel and Leigh streets. Settle into a green leather booth and enjoy a sour-style Final Call, featuring Tanqueray No. Ten gin with fresh Imperial mandarin juice, dry vermouth and lemon served in a coupe. The changing of the seasons triggers access to different fresh ingredients. One of the bar’s favourite fruit inclusions coming into the colder months is mandarins: starting with Imperials in autumn, moving through Clementines, and finally Honey Murcott towards the end of winter.

It may have only taken up residence on Gilbert Place in 2015 but the nautical-themed Hains and Co has a moody, centuries-old charm. A royal blue frontage commands its street-corner spot and an eclectic mix of seafaring relics line the walls. You’d be forgiven for forgetting it’s just off King William Street. Gin and rum take centre stage but Tommy’s Margarita is worth a try – blending Don Julio Reposado tequila, fresh lime juice and agave syrup. It’s shaken, double-strained and poured into a chilled coupe. They’re also serving one hell of a bar menu. Settle in for comfort food including burgers and fries, wings and spicy Nashville-style fried chicken.

This split-level watering hole comes with a good dose of warming Deep Southern soul. Downstairs houses an intimate aperitif bar but upstairs, with its timber-clad ceiling and tucked-away snug booth seating, is the main event. It’s perched in the old East End Produce Market archway with a feature window overlooking Ebenezer Place. There’s even a shrine to Saint Amand, the patron saint of bartenders, complete with neon praying hands. On top of 20-or-so listed cocktails, bar manager Ben Parton says there’s a large number of unique off-menu blends that are “hand-sold” to customers. Don’t be afraid to ask. Named in honour of the second-storey vista, the Ebenezer Pleaser is a shake-up of Tanqueray Gin, Heering Cherry liqueur, Fino sherry, lemon and sugar. Warm up with the in-house DJ spinning old-school soul, funk and blues.

Paris is said to be the city of love. So it’s no surprise a bar that emulates the French capital makes for one of the most intimate nightspots in the west. It’s the ideal cosy spot for date night, according to owner Dominique Lentz, who hails from the French region of Alsace. Cocktails lean on imported European spirits. The Jolie Môme features Dutch-distilled Ketel One vodka with cherry liqueur, house-made orange shrub, lemon juice and egg white. It’s topped off with champagne. Very romantic. Pair your pick with locally sourced cheese and charcuterie. Or, for something more substantial, go for a French classic such as escargot and beef bourguignon. 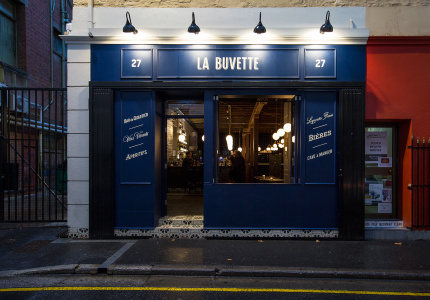