An “unashamedly South Australian” daytime-only restaurant on the ground floor of the Bohem apartments. 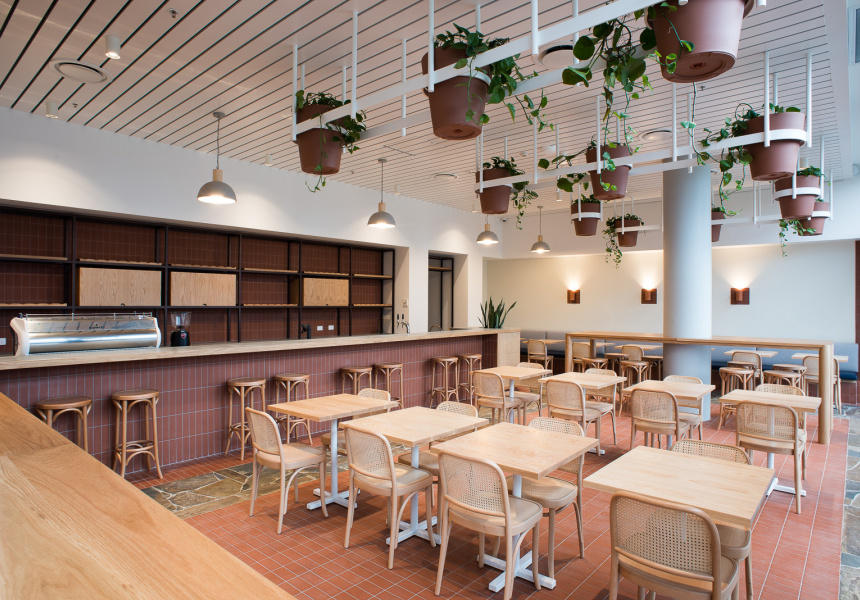 “Tall buildings create vertical suburbs,” says Damon Nagel, managing director of Starfish Developments. He’s behind the 22-storey Bohem apartments on Wright Street. “If you go to a new suburb the first thing you want to know is if you can get good coffee or something decent to eat.”

Soon to open on the ground floor, Arbour Kitchen will be Bohem’s local. But it’s not a cafe. “We’re totally steering away from that label,” says front-of-house manager Damien Kammermann. The 95-seat restaurant will serve high-class food without the price tag, or dinner service.

“We’re not the first to market this, but it’ll be unashamedly South Australian,” Nagel says. That means food, booze and design.

The name, Arbour, is in tune with the surroundings: 3000 plants hang from the first six storeys. “I want[ed] the lines blurred between where [Whitmore Square] ends and the building starts.” Nagel tapped local designer Studio-Gram to bring the outdoors inside.

Starfish Developments are also behind the Vue apartments on King William Street and modern-Japanese restaurant Mimasu that sits underneath. Mimasu head chef Brent Potuszynski – who trained in Michelin-starred restaurants in London – will assume the role of executive chef, working across Arbour and Mimasu.

Fittingly, “more than a quarter of his menu will be plant-based,” Nagel says. But SA-only is still top priority. “I said to [Potuszynski], ‘I want you to know the first name of all of your producers’.”

What’s on the menu? “There will be no avocado for breakfast,” Nagel says, defiantly. “Maybe my arm might be twisted when it’s seasonal. But if it’s not seasonal, it’s not on.” Instead there’ll be blue-swimmer-crab brioche, an egg-white omelette with wild mushrooms and knobs of house-made butter served in pint-sized plant pots. The lunch menu will be split into “smaller”, “from the sea” and “from the land”.

“I’m massively passionate about international wines … ’cause I need reference points,” says Nagel, who makes wine under the Brackenwood Vineyard label. “But we have some wonderful stuff here.” A strictly South Australian wine list will feature his drops alongside Shobbrook Wines and long-standing vintners such as Henschke and Geoff Hardy.