The joint venture – by the co-founders of Adelaide Wine Markets and food truck Caroclub – will stock and serve local boutique wines alongside fried chicken, burgers and loaded fries, plus breakfast and dinner. 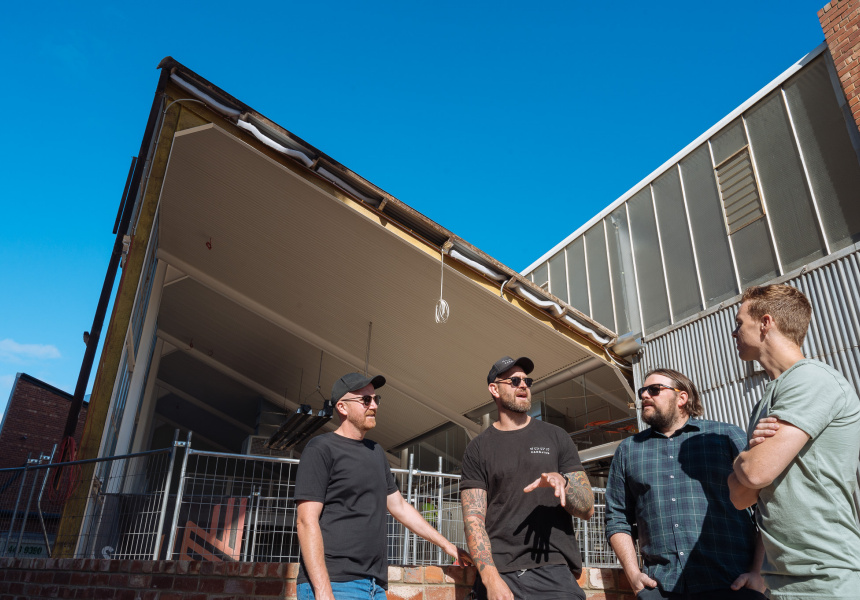 Since launching Adelaide Wine Markets as a pop-up vendor at The Market Shed on Holland in 2018, co-founders Dale Wostikow and Josh Voigt envisioned having a permanent venue that combined their love of local wines with a non-traditional food offering.

Now, the pair is gearing up to open Bowden Cellars, a wine bar, bottle shop and restaurant that does just that – inside Bowden’s upcoming Plant 3 development. They’ve teamed up with food truck Caroclub, who’ll head the kitchen.

“Essentially it is the culmination of two businesses together to form one unified offering,” Voigt tells Broadsheet. “We’re providing a space that currently isn’t available in the area for afternoon and evening food and drink.”

Caroclub co-founders Tim Attiwill, Kyle McLean and Kain Slotegraaf made a name for themselves after Attiwill and McLean starred in season eight of My Kitchen Rules, then later launched their food truck in 2017 with Slotegraaf as head chef. The trio has since built a reputation from frequent appearances at events such as the Adelaide Fringe, various wine festivals and more.

“We were in the process of looking at spaces around town to open up and this opportunity was quite exciting because of the area – it’s up and coming, we know Plant 4 does quite well and it suited our vibe,” Attiwill says.

“I think [with] the truck we’ll probably scale back a little bit to focus more on private events and then the public offering will be at Plant 3.”

Bowden Cellars will mainly stock wines from small-batch producers in Adelaide along with local craft beers, ciders and spirits. The team also plans to host regular wine tastings, masterclasses and product launches with winemakers, especially those without a cellar door of their own.

“We thought it would be great to have a physical retail store where we can showcase a lot of these winemakers that probably don’t get the attention they deserve,” Wostikow says. “We really wanted to make [the venue] community focused, but somewhere for people that are getting into wine for the first time that’s approachable and fun.”

The food menu will include Caroclub favourites such as fried chicken pieces, chicken burgers and loaded fries, plus new breakfast and dinner options.

The fit-out will draw inspiration from the precinct’s industrial architecture and include a central dining area; mezzanine; and courtyard with a dedicated section for the wine bar, cellar door and bottle shop. Once completed, the venue will be able to seat up to 75 patrons with food also available for takeaway.

Bowden Cellars and Plant 3 are expected to open in autumn.