An all-occasions pizza and wine bar. “Kent Town is a blink-and-you’ll-miss-it spot,” says Luke Savas. Unless you’re caffeinating at Tell Henry or getting handy at Bunnings, the city-fringe suburb is more often used as a thoroughfare.

Gearing up to open a pizza and wine bar in the area – with brother Anthony – he hopes it’ll help put Kent Town on the map.

Pan & Vine will soon join a block of shops on the ground floor of a five-storey office and apartment building on King William Street. It’s been a long time coming: the Savas brothers signed on in early 2016 but only got the keys a few weeks ago.

In the meantime Luke hit a decade at West Beach Pizza Bar; Anthony started there in 2014. Their old boss serves pizza “how it tasted in the ’70s and ’80s”, says Luke. Pan & Vine’s style will be similarly old school with thin bases and minimal toppings.

In the already installed Titanic of gas-heated pizza ovens, slabs of stone will flavour the pizza base and crisp it up. “You won’t have to fold your piece of pizza,” Anthony says. “It’ll hold its shape.”

There’ll be seven-or-so listed pizzas, rolling specials (there’s talk of a sauce- and cheese-less pizza: mushroom ragu topped with beef cheek) or choose your own toppings. “There will be ham and pineapple,” Luke announces, unprompted. “I’m not here to discriminate!”

Aside from pizza, there’ll always be two pastas (one white sauce and one red) plus bar snacks (such as fried potatoes, stuffed peppers and pancetta-wrapped rockmelon) and seasonal dishes.

“Rock up in your Birkenstocks,” says Luke (he’s wearing a pair), “or come for a nice dinner.” There’s also scope for takeaway and catering.

The lure of $12 Negronis (with Cinzano vermouth) all day every day is hard to top. There’ll be as many wines as listed pizzas, including a few from Alpha Box & Dice. Peroni Red (and its gluten-free counterpart) will lead a line-up of bottles and stubbies.

Crafty Design’s (Port Admiral Hotel, Shōbōsho, Abbots and Kinney) branding is an eye-catcher. It’s plastered on the boys’ T-shirts (variations of which will be on-sale when they open).

At this stage, the plan is to trade for lunch and dinner on weekdays and ‘til late Thursday to Sunday. “Emphasis on ‘late’,” says Luke. “We want better food options after 11pm.” 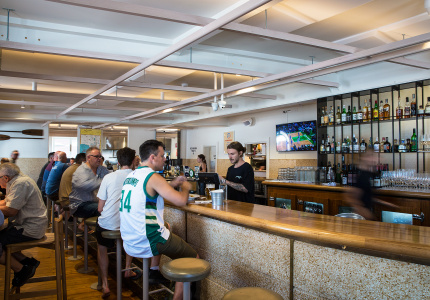