After four years of poultry in motion, the festival pop-up is putting down roots on Hindley Street – in a bricks-and-mortar eatery and bar with a frontage inspired by New York bodegas. 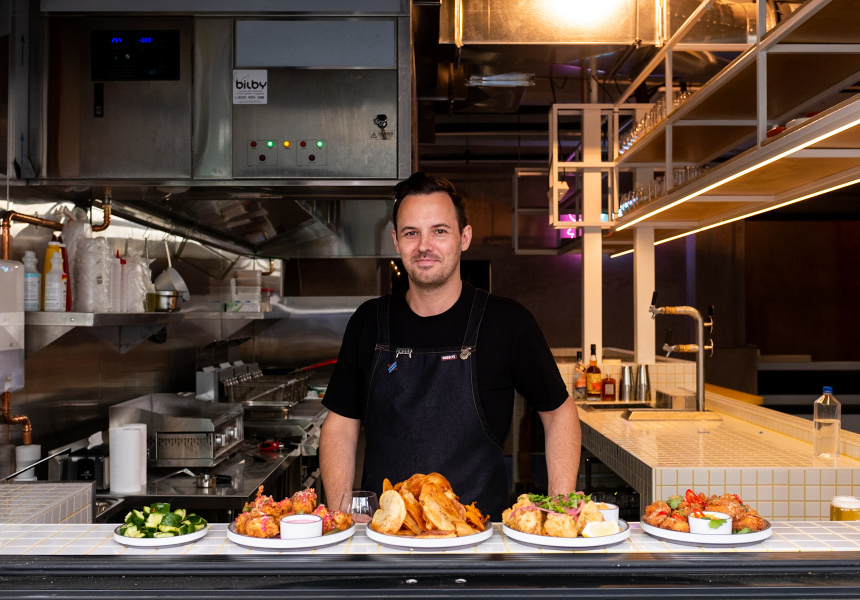 That’s the key to making a tasty chicken nugget, according to Chet O’Brien-Tilbrook, who is weeks away from opening his nugget-centric restaurant: Motherlode Nuggeteria.

While its permanency is new, Motherlode isn’t. O’Brien-Tilbrook has been slinging his signature chicken nuggets around Adelaide for four years. His first stall was at the Royal Croquet Club in 2018, and he’s been doing collaborations with local eateries ever since.

Motherlode will open as a 50-seater restaurant on Crippen Place in the site formerly home to Mr Kim’s – the ground-floor club between Rocket Rooftop and Electric Circus – which has moved a couple doors down and will reopen in October.

Its tiled facade on Hindley Street has been scraped off to reveal the rustic stone building underneath, and the faded VHS covers that once filled the video-store-style shopfront have been replaced with beer cans, San Pellegrino bottles and milk cartons to emulate a convenience store.

Opening in the old Mr Kim’s is sort of like coming home for O’Brien-Tilbrook, who worked upstairs at Rocket Bar for some years under his DJ alter ego Meryl Creep. It was during this time he became known as the “nugget guy” who would create Instagram memes based around nuggets. “Then it got me thinking how I could build this into a bigger brand,” O’Brien-Tilbrook says.

“If there is fried chicken in Adelaide, it’s Korean fried chicken or Nashville fried chicken. From day one, I didn’t know why anybody else wasn’t just using the chicken nugget as a vessel for different flavours … essentially we can do anything with it.”

That blue-sky thinking has led to a cuisine-hopping menu with toppings such as honey sriracha, satay and mi goreng. Confirmed fixtures at the restaurant will include nuggets marinated in laksa, coated in a coconut-panko crumb and topped with pickled red chilli, coriander and fried shallots. And nugs marinated in buttermilk and tossed in a parmesan spice “dust” and topped with freshly shaved parmesan, pink mayo and cornichons.

Plus, sandwiches including Motherlode’s popular chicken, lettuce and mayo, and crispy cauliflower. The sangas will be available at lunch only (12pm to 3pm Wednesdays to Fridays) but some will be adapted for the evening menu. There’ll also be a selection of sides, salads and desserts.

As for drinks, expect Youngblood beer on-tap and in cans, and a tap reserved for a rotation of Australian brewers. Victoria’s Konpira Maru makes up the core wine range, backed by three drops from a featured local winemaker each month. There’ll also be a small selection of cocktails, including spiked sodas, and a big selection of non-alcoholic wines, beers and mocktails.

A takeaway window will face Hindley Street for office workers and university students to grab sandwiches, batch-brew coffee and drinks during lunch. In the evenings, the venue will act as a small bar, so patrons can kick on after the kitchen closes at 11pm.

The space is designed by O’Brien and his business partner Paul Glen (who owns Rocket and Electric Circus). The pair has also been doing the majority of the build themselves.

“I’ve always identified Hindley Street as the place I wanted Motherlode to be,” O’Brien-Tilbrook says.

“From day one, the Motherlode brand always took cues from the New York bodega, family-run convenience store. A lot of the branding stems from that and it has kind of flowed into this, with the frontage.

“I love the aesthetic of the New York bodegas, where you walk in and you can get anything – you can get a drink, get some booze and a sandwich, and that’s the vibe I wanted to chase.”

Motherlode Nuggeteria will open at 142 Hindley Street on Saturday October 9 and operate from Wednesdays to Fridays from lunch till late and Saturdays from 5pm till late.