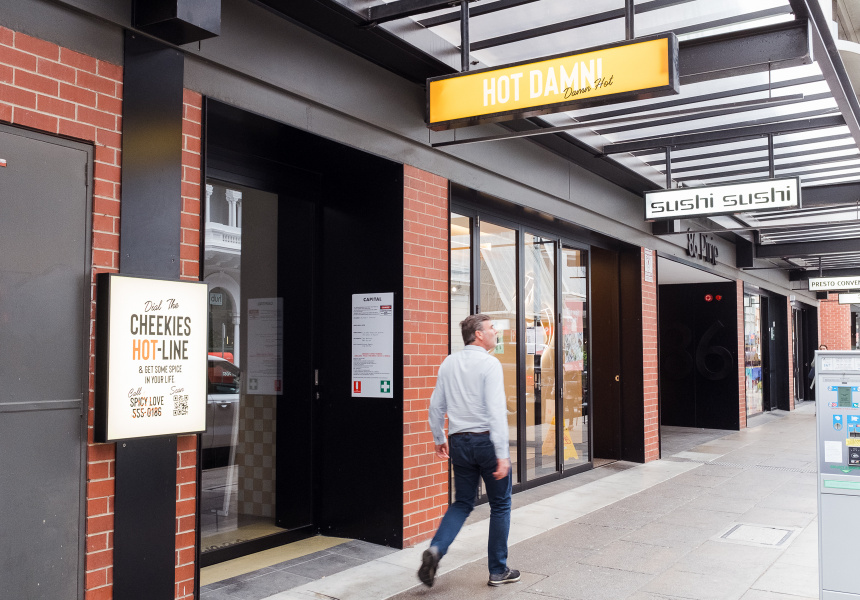 “I’ve been wanting to do this for ages. It’s been pushed back since around 2018 but it’s finally almost there,” says Rashaad Cézar.

As the frantic lunchtime crowd races down the street behind us, he’s standing still inside the new Pirie Street location for his Cheekies Hot Chicken brand. The conversation is full of excitement, but with a tinge of frustration; there have been unforeseen delays due to gas issues affecting the entire building.

“Essentially, we were ready to open three weeks ago” says Cézar, who owns the business with his partner Rachael Sharples and new business partner Brendan Carter (of Unico Zelo and Applewood Distillery). “But when we were about to have our gas installed, they figured out there’s a massive issue with the entire building so they can’t connect our gas. Everything else is done, but unfortunately gas is pretty essential for cooking, and there’s no concrete timetable for when it might be fixed.”

Luckily Cézar has been looking at temporary solutions that will be available in the next two weeks, so patrons won’t have to wait too much longer for their fix of spicy fried bird.

The new spot – between Chicken & Pig and Sushi Sushi – is on Pirie Street’s growing lunch strip, near Osteria Oggi, Abbots & Kinney, Soi 38 and more. It’s set to bring the Cheekies brand and its fiery food to a new daytime crowd, following its first location inside Cézar’s Rundle Street bar Brklyn.

It’s a passion project for Cézar, who’s nurtured a love for fried chicken since his childhood in London, where there was a chicken shop around every corner. “I’ve been obsessed with fried chicken forever,” he says. “I moved over to Adelaide around 15 years ago and there just wasn’t anywhere near as many of those kinds of places. So I started developing ideas, started to come up with recipes, just because I was used to eating a lot of fried chicken. And then I stumbled across Nashville hot chicken and I just thought it was so cool, so niche, and I fell in love with it.”

During a trip to the US, touching down in Tennessee and Los Angeles, Cézar immersed himself in the culture and community of Nashville hot chicken, eating it every day and learning what he could from various chefs he met, modern institutions like Howlin’ Ray’s in LA, and Nashville icons such as Prince’s Hot Chicken Shack and Hattie B’s. Returning home, he tinkered with his own recipes, expanding beyond the traditional hot chicken seasonings of cayenne and brown sugar by adding habanero and Carolina Reaper chillies. These recipes eventually landed on the menu at Cheekies’ Brklyn site, which opened in early 2020.

“The feedback was great. The chicken actually ended up being the most popular food we had [at Brklyn] and people were coming in specifically for it,” says Cézar. It gave him confidence that his chicken could stand alone in a dedicated space.

After stumbling upon the Pirie Street site back in October, Cézar jumped on it and brought on Faculty Design to handle the interior, which is now kitted out with bar seating, cosy booths, playful neon signage, and a yellow colour scheme reflecting the star of the show: golden fried chicken.

Tenders and wings are both dry and wet brined to maximise tenderness, fried, then dunked in spicy oil, coated in a spice mix, and served at one of five heat levels ranging from “no heat” to “damn hot”. Be warned: the situation gets pretty wild once you move beyond medium. “It’s called hot chicken for a reason,” Cézar says. “Something I noticed in Australia is that the hot chicken offerings are a little watered down for the local market, and that’s something we just didn’t want to do. We wanted to stay authentic, so you get a mild and it’s still going to have a bit of a kick, but anything above medium is going to blow your socks off.”

We hear that, if you ask for it, an even higher level of heat exists – one you’ll need to sign a waiver to attempt and that Cézar says took him to a “totally different planet” during the testing process. There’s also a fried chicken sandwich and tacos, plus chicken and waffles.

Brendan Carter has come on board – a partnership cemented during the tenure of Unico Zelo’s tiny pop-up wine bar inside Brklyn – to source chicken from local sustainable farmers. He’s also put together an “accessible and fun” wine list that’ll lean heavily on small local producers such as Delinquente and Moorak. There’ll also be local and interstate beers (plus Pabst Blue Ribbon) and a focus on non-alcoholic options – including no-alcohol brews from Bridge Road Brewing and Heaps Normal – for the work crowd who aren’t looking to write off an entire afternoon of productivity.

And while the Pirie Street site prepares to finally get up and running, you can still get your fix of spicy bird at the Brklyn pop-up. (Once Pirie Street opens, the Brklyn location will continue in a smaller format, with just two menu options.)

Cheekies Hot Chicken will open at 1/86 Pirie Street, Adelaide, in late May.