The couple behind Bowlsome and Public are bringing a new concept to the old Paesano site – an all-rounder serving coffee, pastries and baked eggs by day, and woodfired lamb shoulder, pizza and house-made pasta by night. 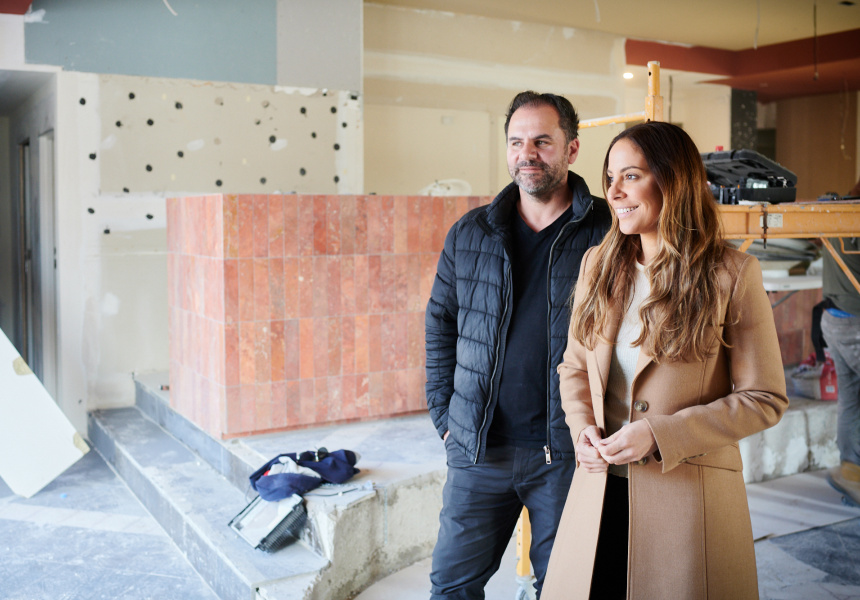 When Broadsheet meets with Danielle Elia and James Anthony, they’re smiling, laughing and, at least to my eyes, stress-free. You’d never guess they’re about to launch their fifth, sixth and seventh venues – all in the space of a month.

The couple behind Bowlsome and Public are gearing up to open their fourth Bowlsome site (following the Henley, CBD and Burnside locations) and an entirely new concept next door (in the former Paesano digs on O’Connell Street) called Pippo – a 100-plus-seat restaurant open for breakfast, lunch and dinner. Another venue will soon launch in the CBD (more on that later).

“By now we’ve done it so many times … we’re just making it happen,” says Elia, coolly. “As long as we have a week in between them we’ll be right!”

She’s unperturbed, but on top of designing and launching three new venues, her time is spent keeping a close eye on the day-to-day operations of each of the existing Bowlsome sites (while Anthony oversees Public). “I’m not opening and closing, obviously, that’s harder, but I’ll come in for the lunch period,” she says. Once the new Bowlsome shop and neighbouring restaurant open, she’ll be there too. Anthony will be on the ground at Pippo.

“James will be here at the beginning,” says Elia. “We’ve owned Public for seven years now – it’s established, we have good clientele, it’s always busy, so it doesn’t always need us.

“Public’s just a good vibe, it’s a good space,” she continues. “And that’s what we want [Pippo] to feel like, too. It will look very different though – Public is very industrial and dark, this is light and airy and more modern.”

Elia, who has a degree in interior design, is the creative force behind the new venues. They’re still deep in construction mode, but her vision is starting to materialise. Come the end of the month, Pippo will be clad in timber paneling, with travertine floor tiling and a red-ochre brick bar. A raised floor will service daytime trade with a communal oak table, a coffee station and a display cabinet full of takeaway options. “We have to have some on-the-go items for the day, then at night we’ll turn the fridge into a charcuterie display,” says Elia. “It’s going to be a different vibe.”

The lower level will cater to diners intending to stay a while, with mix-and-match chairs and tables from 1000 Chairs and Estilo Commercial. Newly installed bi-fold doors will open during weekend brunch.

Next door, Bowlsome is still in its early stages, but Elia hints at a “bit of a desert vibe” with cork-clad walls, olive-green tiles and a terracotta counter. “I kind of want each store to be cohesive but it doesn’t all have to be the same.”

The new neighbouring sites mimic the set-up of Public and Bowlsome, which sit side-by-side on Franklin Street in the CBD. “It’s a good way to grow a new brand,” says Elia. “It’s not too high-risk. It’s a no-brainer for us to open here, especially with all the activity that will be happening next door [at Pippo].”

The new venues are the couple’s first in North Adelaide. But they’re no strangers to the area. Anthony used to operate Un Caffe Bar a couple doors down, many years ago, and the couple have high aspirations for the strip.

“I feel like it hasn’t had anything like what we’re going to do next door [at Pippo] to anchor it as a destination,” says Elia. “We’re doing breakfast, lunch and dinner – it’s very inviting, very relaxed, but still that next-level [food]. We want people to feel they can come for breakfast in the morning then come for a beautiful dinner at night that’s not intimidating. You can bring the kids one night or bring a group of friends and still feel like it’s a good vibe.”

Elia sees it as a place where “everyone is happy and everyone can find something to eat”. The menu (which Anthony describes as “refined yet honest”) will revolve around the custom-built woodfired oven: baked eggs in the morning, pizza for lunch, and slow-cooked lamb shoulder or baked fish for dinner. There’ll also be house-made pasta. Grab-and-go items include freshly baked panini with cured meats, house-made pastries, and coffee pulled through a KB90 La Marzocco.

There’s more to come, too. Once the North Adelaide sites launch, Elia and Anthony will move on to their seventh venture, a “classic” espresso bar called Way Back When on the ground floor of the new GPO Building (next door to Public and Bowlsome on Franklin Street). Keep an eye on Broadsheet for updates.

Pippo is scheduled to open in September inside North Adelaide Village on O'Connell St. It will trade daily from 7am to late. Bowlsome North Adelaide will open next door at the end of August.