Coming Soon: Bowden Brewing, a New Neighbourhood Brewhouse by and for Locals

A 600-litre brewery from the Nola team is coming to Plant 3. Expect a core range of easy-drinking beers plus seasonal and experimental releases, paired with South American snacks. 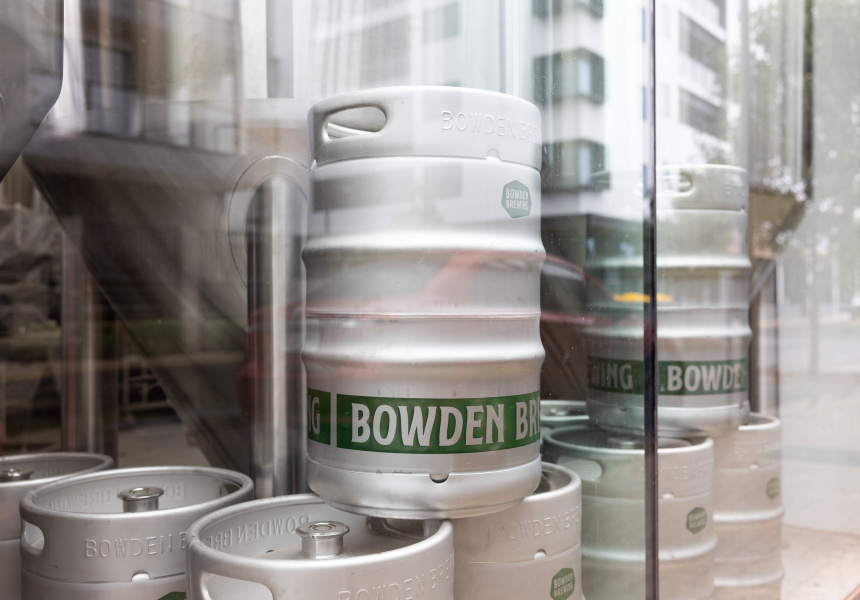 “It’s been a long time coming,” says Alex Marschall of his soon-to-open 600-litre suburban brewpub. “We’ve had our company set-up since mid-2018.” But the seeds of the Bowden brewhouse were planted even earlier – more than six years, in fact – before Marschall opened Nola with business partners Oliver Brown, Josh Talbot and Matt Orman.

“Mine and Josh’s intent was to create a brewery from the start,” says Marschall. “But we started looking into it and with the costs and everything we pulled it back and thought, ‘Well, how can we get involved in the craft-beer scene, get craft beer to people and get some more cashflow before we invest in all the equipment?’ And that’s where a craft-beer bar came into it. And Nola started.”

Six years on, Marschall, Brown, Talbott and Orman – and new business partner Jake Phoenix – have the capital to launch Bowden Brewing, a hyper-local brewpub opening in Plant 3 in May. (It’ll sit next to wine bar, bottle shop and restaurant Bowden Cellars in the new development, next to sister site Plant 4.)

When Broadsheet visits it’s very much a construction site, but signs of the imminent brewpub are there. Eight steel tanks have just been installed, now visible through towering glass windows to passers-by and residents of Fourth Street. When the venue opens the serving (or “bright”) tanks will connect directly to the taps, essentially acting as giant kegs for tank-to-tap pours.

“A lot of people say beer tastes better on-tap out of a keg as opposed to bottles, so think about that on a larger scale,” says Marschall. “The idea is getting it to [people] as fresh as possible with as little interference or handling in between.”

Marschall and Phoenix met through their fly-in fly-out engineering jobs and bonded over a shared love of beer and home-brewing.

“I’ve been passionate about brewing and craft beer for a long time,” says Marschall.

“It really satisfies the old nerd [in me],” adds Phoenix. “The science, it’s cool.”

Marschall says it also allows them to flex their creative muscles a bit more. “Our jobs as engineers didn’t really allow us to exercise [that]. Brewing sort of has the best of both worlds: the technical scientific aspect as well as the creativity.”

At Bowden Brewing, the pair plan to keep production small, brewing only enough to sell on-site (with a little bit of excess to supply their favourite bars). “The idea is hyper-local beer, in Bowden, for Bowden. The majority of what we make here we’ll sell directly across the bar,” says Marschall.

“We’ll do lots of local collaborations, too ... using fruits from local suppliers … for beers like porter, we’ll get local coffee roasters [involved]. And with Beach Organics at Plant 4, we can use a lot of different ingredients there.”

The concept follows the new wave of craft breweries in the US – and growing efforts to reduce food miles – where “local” doesn’t just mean your city, but your neighbourhood or even your block.

For the Bowden Brewing team, the talk of staying local isn’t just lip service – Phoenix lives one suburb over in Brompton, and Marschall has an apartment in one of Bowden’s new residential developments. “We’re embedded in the community,” says Marschall. “Hence the name, Bowden Brewing – we’re not looking to take over the world and be a massive chain with mass-produced beer. We want to make beers we love on a scale that’s big enough to share with the community.

“We’ll have a few core beers, but we’ll look at adjusting that based on what the locals want to drink.”

“We’ve been taking community feedback … We want to fit in well with these guys,” says Phoenix, pointing to the neighbouring apartment buildings.

For now, the core four includes Bowden Draught (“an easy-drinking beer that anyone can get around”); a session ale (“something a little bit more hoppy, a little more fruit-forward but still relatively easy-drinking”); a seasonal fruit sour (“it will change season to season depending on what [fruit] is available from local suppliers”); and an IPA (“for hop lovers – something big and bitter”). The brews will also be available to-go in growlers.

To soak up the drinks, the kitchen will turn out South-American and Central-American snacks such as tacos, and meats and vegetables grilled over charcoal.

Besides the kitchen and production area, the Sans-Arc-designed space (with Divide Design Co on branding) will include a 14-tap bar, and a mezzanine for dining and functions that’ll overlook the brewers in action. The clean, modern fit-out will feature plenty of wood, playing off the warehouse’s industrial vibes.

Bowden Brewing is expected to open at Plant 3 in May.